ORLANDO, Fla. - There are three systems in the tropics being watched by forecasters with the National Hurricane Center.

The first, Potential Tropical System #2, is expected to become a tropical depression within the next day or so. On Wednesday afternoon, the center of this system was located about 181 miles (285 km) east-southeast of Guajira Peninsula, Colombia with maximum sustained winds of 40 mph (65 kph). Tropical-storm-force winds extend outward up to 60 miles (95 km) from the center.

The system is moving toward the west near 21 mph (33 km/h).  On the forecast track, the system will pass near the southern Caribbean Sea and the northern coast of Venezuela tonight, near the Guajira Peninsula of Colombia early Thursday, and over the southwestern Caribbean Sea later on Thursday and on Friday.  The system is expected to be near or over Nicaragua by late Friday. 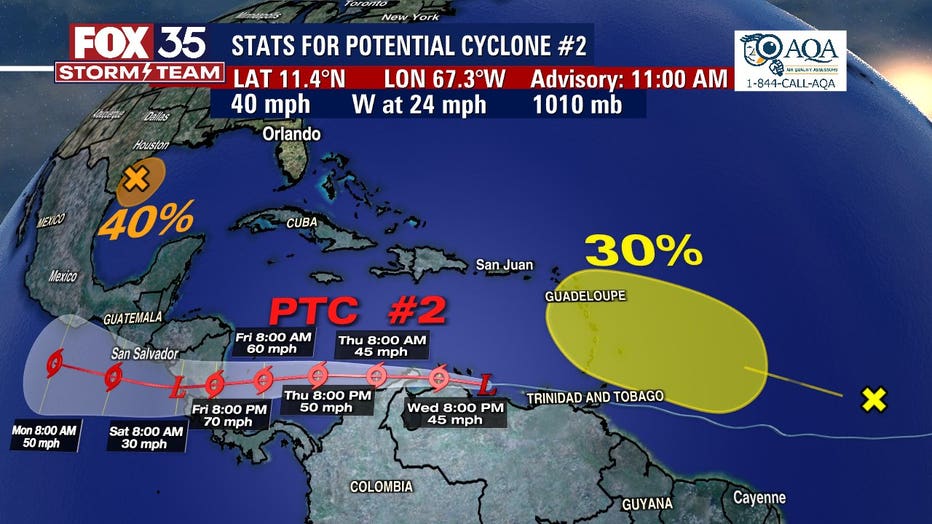 A second system being monitored is an area of disorganized showers and thunderstorms in the Gulf of Mexico. This area now has a 40% chance for further development.  Showers and thunderstorms associated with this area of low pressure have increased. It is forecast to move slowly westward and approach the coast of southern Texas and northern Mexico by early Thursday.

A third is a tropical wave with an area of disorganized showers and thunderstorms with a 30% formation chance within the next five days. Slow development of this system is possible while it moves west-northwestward for the next few days. The wave is forecast to move over the Windward Islands late Friday or early Saturday and then over the eastern Caribbean Sea by the weekend, where further development is unlikely due to unfavorable environmental conditions.

Stay with the FOX 35 Storm Team for the latest updates throughout hurricane season.