ORLANDO, Fla. - Following on the heels of former Hurricane Julia, Tropical Storm Karl formed in the southwestern Gulf of Mexico on Tuesday and is expected to meander off the coast of Mexico over the next several days, producing heavy rainfall and gusty winds.

The tropical cyclone is not expected to threaten the U.S. Gulf Coast because the current weather pattern will prevent it from moving north. Instead, the system will likely slowly churn over the southwestern Gulf of Mexico and Bay of Campeche through the end of the week.

On Wednesday, Karl is located east-northeast of Tuxpan Mexico. A slow drift to the west and west-southwest is expected to begin later this morning and a somewhat faster motion toward the south-southwest is forecast by Thursday morning. 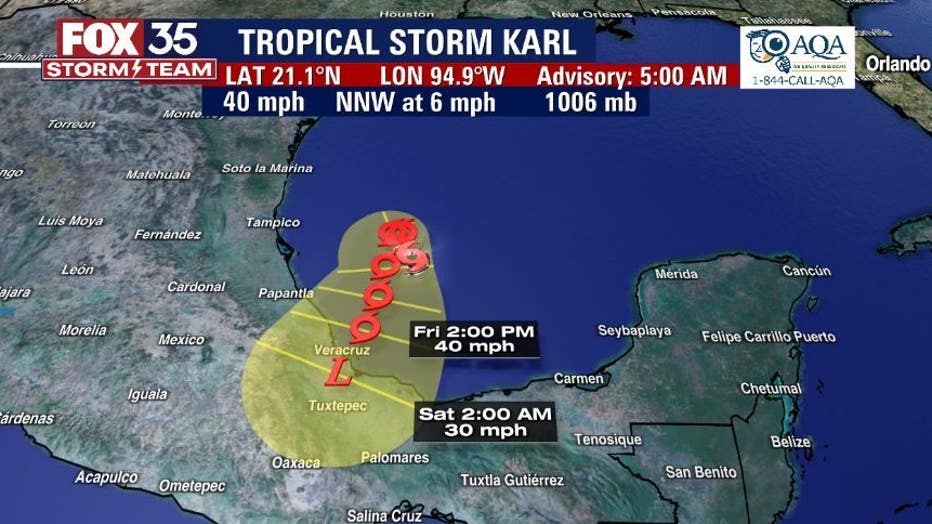 "On the forecast track, Karl will be approaching the coast of Mexico within the watch area on Thursday night. Gradual strengthening is expected for the next day or so, followed by gradual weakening on Thursday," the NHC said.

Heavy rainfall is expected over portions of southern Mexico during the next couple of days.

Maximum sustained winds were near 45 mph with higher gusts.

Tropical Storm Watch is in effect for: