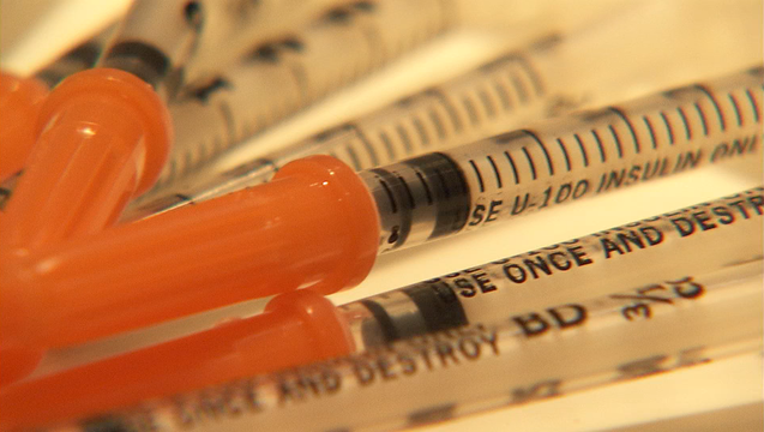 MIAMI (AP) - Jose Garcia carried a drawstring backpack full of used syringes as he walked into the converted shipping container that serves as the base for Florida’s only hypodermic needle exchange program.

The 57-year-old carefully counted as he dropped 115 syringes one-by-one into a locked biohazard bin brimming with hundreds of other used needles.

Garcia said the University of Miami pilot program protects drug users like him by allowing users to exchange used syringes for clean ones in order to avoid the transmission of HIV, hepatitis C and other blood-borne diseases. “Too many kids” re-use discarded needles found on the streets, he said. Called the IDEA Exchange, the program also conducts HIV screening, provides the opioid-overdose antidote Narcan and steers willing addicts to rehabilitation and social services.

Similar needle exchanges could soon come to other parts of the state under a new law. Gov. Ron DeSantis signed a bill Wednesday giving Florida counties the authorization to establish their own programs. The measure is crafted after the Miami program that has disposed of more than 317,000 used needles since it received temporary authorization from lawmakers in 2016.

The bill, drafted by Miami Gardens Democratic Sen. Oscar Braynon, was unanimously approved by the Senate in early May after clearing the House 111-3.

Although a similar bill was halted during last year’s legislative session, Braynon said the passing of the measure represents a turning of the tide for state lawmakers who have been grappling with a growing opioid problem.

“The only thing we found that is actually working in the state of Florida is us,” Braynon said of combating the epidemic.

Narcan distributed by the IDEA Exchange has reversed over 1,250 overdoses since the program’s inception, according to program data. Florida registered more than 5,000 opioid-related deaths in 2017, per the Center for Disease Control and Prevention.

The IDEA Exchange’s founder and medical director, Dr. Hansel Tookes, had made several attempts throughout the years to convince lawmakers to consider authorizing needle exchanges. He said in May that he was “stunned” and elated that it finally passed.

“So many people are dying preventable deaths in Florida,” Tookes said at the time. “I’m really heartened that the Legislature recognizes that.”

Tookes said he hopes to advise other counties establishing similar programs after the measure goes into effect July 1. There are more than 300 needle exchange programs spread across 39 states, Washington D.C. and Puerto Rico, according to the Kaiser Family Foundation.

Harrison Vines, a self-described “active heroin addict” who lives underneath a highway overpass blocks away from Miami’s bustling medical district, said he is in the program because he worries about contracting blood-borne diseases. The homeless 32-year-old from Alabama said needle exchanges give users “peace of mind.” While he understands the stigma surrounding exchanges, he said people must realize that drug use is common in all communities, regardless of socio-economic status.

Florida has the highest rate of new HIV diagnoses in the U.S., according to the Center for Disease Control and Prevention.

Barbra Gendy, 48, rode her bike to the exchange in the warm afternoon sun to pick up some supplies. She said she believes the program, which has over 1,000 enrollees according to University of Miami data, has been a massive success.

“There’s not as many dead people out there as there was before,” she said.