The FOX 35 Storm Team is watching two tropical disturbances in the Atlantic.

Following the destruction left behind by Hurricane Ian last week, the National Hurricane Center is now monitoring two Atlantic tropical disturbances for possible development in the week ahead.

A tropical wave located several hundred miles east of the Windward Islands have changed little in organization during the past several hours.

RELATED: Hurricane Ian aftermath: Get paid $1,300+ a week as debris monitor in Florida

"Further development of the wave is possible, however, and a tropical depression could form during the next few days while it moves generally westward at 15 to 20 mph, reaching the Windward Islands and the eastern Caribbean Sea by midweek," the NHC said.

It has a 40% formation chance over the next five days. 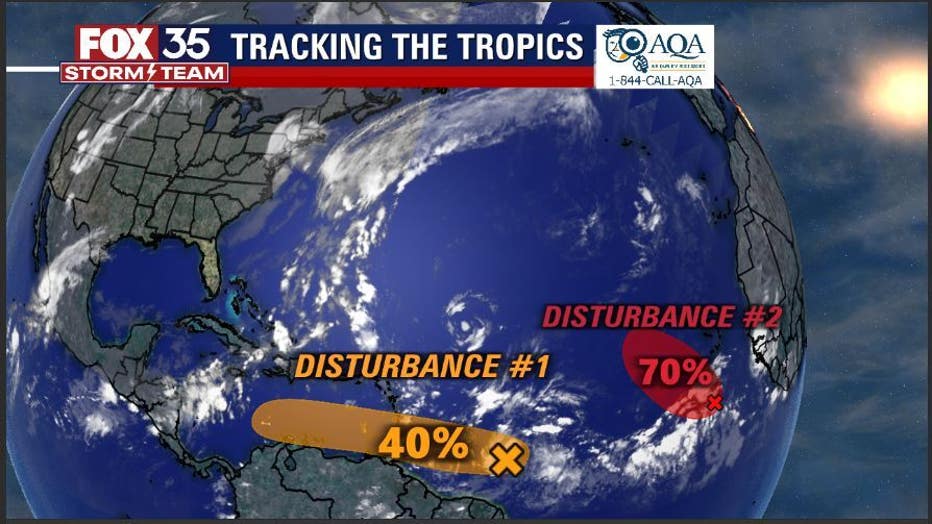 A tropical wave located several hundred miles south of the Cabo Verde Islands continues to produce disorganized showers and thunderstorms, the NHC said in an advisory Monday morning. Forecasters say it will likely form into a tropical depression around the middle part of this week.

Formation chances over the next five days are 70%.

MORE NEWS: Here's when power in Florida will be turned back on after Hurricane Ian

Will either of these tropical disturbances threaten Florida?

A blocking high-pressure system is forecast to build to the north of Tropical Disturbance No. 1, which should reach the eastern Caribbean Sea by Thursday. Therefore, the FOX Forecast Center believes the disturbance will keep heading west across the Caribbean, preventing it from turning north toward Florida or the rest of the U.S. – at least through the end of this week.

Tropical Disturbance No. 2 is also not currently a threat to Florida or rest of the U.S., as the computer forecast models suggest it will move toward the northwest or north and remain far from the U.S. East Coast.

If either or both of these systems becomes a tropical storm, they will earn the names Julia and Karl in their order of formation.

October ranks as the third-most-active month (behind September and August) for tropical activity in the Atlantic Basin, typically producing about two named storms, one of which becomes a hurricane. And every other October, on average, one of those hurricanes intensifies into a "major hurricane," achieving Category 3 or higher intensity on the Saffir-Simpson Hurricane Wind Scale.