The family of Miya Marcano says the investigation into the disappearance and death of the Orlando teenager was botched. They released video of a deputy interviewing the prime suspect in her death, Armando Caballero, pointing to this as negligence. Orange County Sheriff John Mina defended steps taken by his deputies and released new timeline details of the investigation.

LAKE MARY, Fla. - The Orange County Sheriff's Office has released the most detailed timeline to date of their investigation into the death and disappearance of Miya Marcano.

Deputies said the 19-year-old college student was last seen on the afternoon of Friday, Sept. 24, at the Arden Villas apartments in Orlando. The prime suspect in her disappearance and death, 27-year-old Armando Manuel Caballero, was found dead from an apparent suicide on Monday, Sept. 27.

Family, friends, and law enforcement searched for days before discovering a body believed to Marcano on Saturday, Oct. 2.  The identity was positively confirmed by the Orange County Medical Examiner's Office on Tuesday.

Here's what we know about what happened before and after Miya's disappearance:

Caballero was a maintenance person at the Arden Villas Apartments where he had worked since June, according to investigators.  Orange County Sheriff John Mina said Marcano lived and worked at the same apartment complex.

The sheriff said it appears to have been a situation where Caballero might have developed a romantic interest in Marcano but he was rebuffed by her. 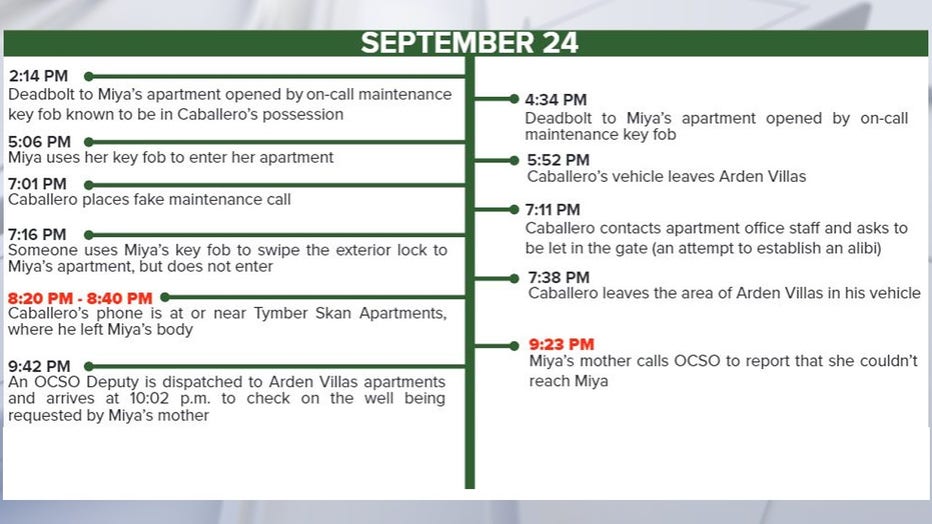 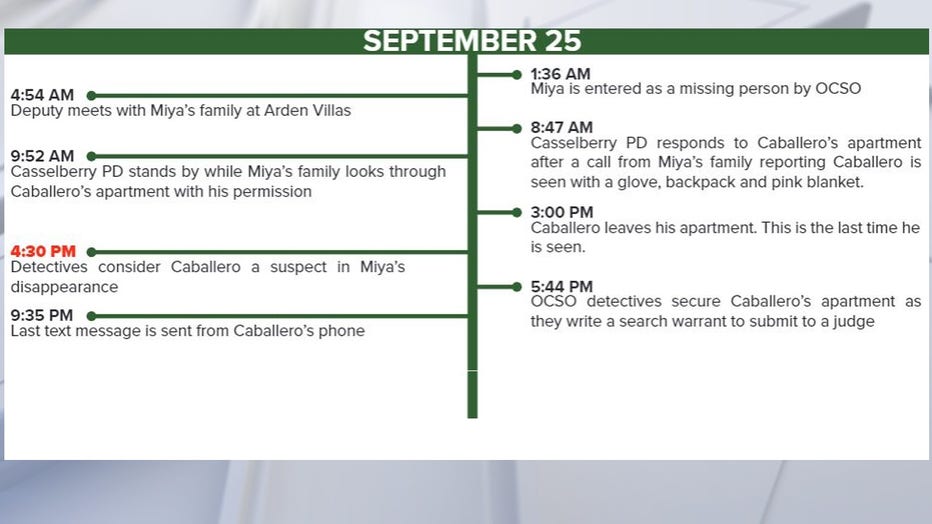 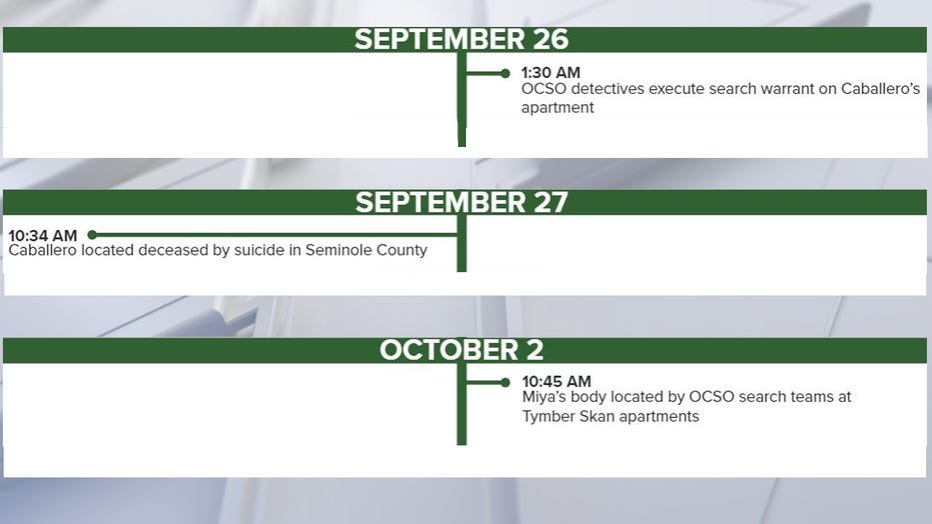 The attorney for Miya Marcano's family said the Orange County Sheriff's Office did not act fast enough and were not as thorough as they could have been in the investigation into the disappearance of the Orlando teenager.

On Wednesday, Marcano's family released new details about the night of Marcano's disappearance, including their interactions with Caballero and Orange County deputies.

Her family contacted law enforcement and traveled to the Arden Villas apartment complex shortly after her disappearance.

"After the family discovered that Miya was not on the flight she was scheduled on they immediately contacted the Orange County Sheriff’s Office to conduct a welfare check," the family's lawyer stated in a press release. "Miya’s family knew that something was wrong with Miya. Upon arrival at Miya’s apartment, the deputy waited for Miya’s roommate to arrive to give him access to the apartment."

When they went inside her apartment, the lawyer said the following was discovered:

The deputy reportedly found immediate signs of a struggle "but did not consider it to be a crime scene."

The family said that the deputy on the scene left and they did not hear back with any more information about what was being done. They said that they also called the Arden Villas repeatedly but were never contacted back or returned their e-mails. The family drove from South Florida to check on what was happening.

When the family arrived at the apartments, they called the sheriff's office to the complex to give them access to Miya's room.

"Upon entering Miya’s room, they found a box cutter under a rug that didn’t belong to Miya. A short time later, Armando Caballero arrived in front of Miya’s apartment and asked Miya’s aunt ‘are you looking for Miya?’ This was approximately 4:00 a.m. Caballero was off work and had no reason for being at the Arden Villas."

FULL VIDEO: Video released by Miya Marcano's family from night of her disappearance

The attorney for Miya Marcano released this video from the night she went missing.

"Not wanting the scene to be contaminated, the security guard on duty attempted to give the fingerprints he lifted from Miya’s window to the deputies but was told by the deputies to keep them as he chuckled and said, ‘this isn’t a high priority case.’"

The family said they immediately knew Caballero had something to do with their daughter’s disappearance.

You can read more details released by the family here.