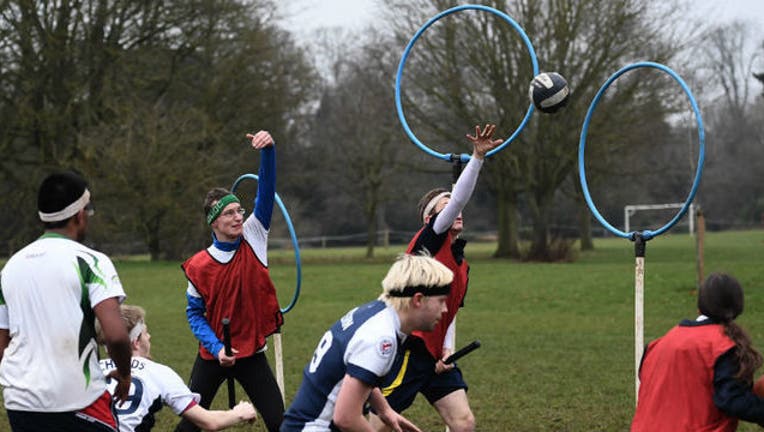 MINNEAPOLIS (AP) - Minneapolis will soon be home to a major league Quidditch team, a sport inspired by the "Harry Potter" book series that's gaining popularity among Muggles around the world.

Major League Quidditch in December announced the creation of a franchise expansion team in Minneapolis, Minnesota Public Radio reported. The team will hold tryouts in April and go on to compete in the league's north division, which includes Indianapolis and Detroit.

Quidditch began as an intramural sport at a handful of high schools and colleges. Now, more than 500 teams in 39 countries try to emulate the fictional magical sport.

Aspects of the sport had to be changed from the books, which had wizards and witches flying around on brooms, dodging "bludgers" and trying to score with a "quaffle," all while trying to catch a winged "golden snitch." In the real world, players use poles instead of brooms, a volleyball for quaffle and dodgeballs for bludgers. A person runs around and acts as the golden snitch.

"So, you're running down the field, broom between your legs, trying to get the quaffle through the hoops and not get hit by the bludgers," said Luke Zak, founder of the University of Minnesota's Quidditch team, who called it a "full contact, mixed-gender sport on brooms."

"Over a couple years there started to be this debate in the community over whimsy versus competition, what's more important," Zak said.

The launch of the Major League Quidditch organization in 2015 pushed the sport in a more competitive direction, Zak said. People who have never read the books are beginning to participate, with some fans and players traveling from around world to attend the International Quidditch Association World Cup, he said.

The World Cup is a biannual tournament where 29 teams compete to become the world champion. The U.S. National Team won the 2018 title in Florence, Italy, on July 1.