AdventHealth says 25,000 people who took a coronavirus test could have gotten the wrong results.

ORLANDO, Fla. - The CEO of MicroGen Diagnostics says the company's COVID-19 tests are reliable after AdventHealth terminated its contract with the third-party lab.

AdventHealth says the results of more than 25,000 coronavirus tests performed by the health system in Central Florida are "unreliable."

AdventHealth uses several labs across multiple states for its COVID-19 tests. Officials say the issue is with one of AdventHealth's third-party labs that have been processing tests.

"To meet the unprecedented demand for COVID-19 testing, we rely on nationally accredited third-party labs to assist us. Unfortunately, one of these labs processing a significant number of our public tests has been unable to fulfill its obligation," AdventHealth said on Saturday.

“I’ve always had 100 percent confidence in our reliability and stability and the accuracy of our tests,” said CEO MicroGen Diagnostics Rick Martin.

Martin claims that the lab, based in Texas, couldn’t meet demands because the lab was unable to get the machinery that they need to get test results, which caused a backlog. Martin claims the samples were stored properly while there were delays.

However, AdventHealth says the tests are "unreliable" and many people will need to be retested. The health system says it is now notifying individuals who have been impacted, either by letter or phone call, with the following directions:

Tanya Rezak had been waiting for more than a week for her COVID-19 test after being told it would take two to five days. She was told her test wouldn't be processed at all on Saturday. Rezak took another COVID-19 test on Monday morning, but this time she went to another health system for the test.

“It's just a shame that those peoples' results can't get to them and they'll have to go through the process again,” Rezak said. “It kind of made me concerned and worried about the process of testing in general.”

Ashley Cline is also looking to get retested. He was waiting about three weeks for results before AdventHealth notified him on Twitter that he wouldn’t be getting results. 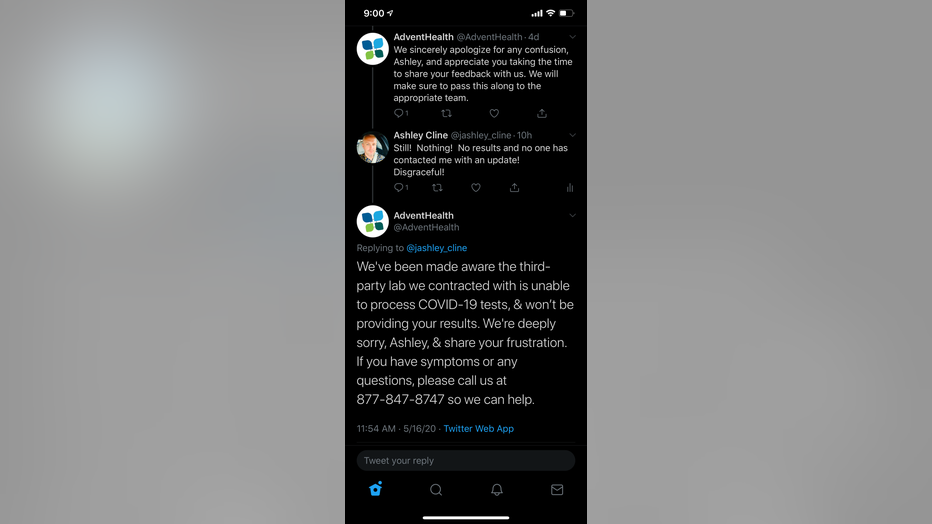 “I submitted my test on April 29 and I did not get my results,” Cline said. “Going three weeks thinking every day, ‘Am I going to get my test back, and what are the results?’” Cline said.