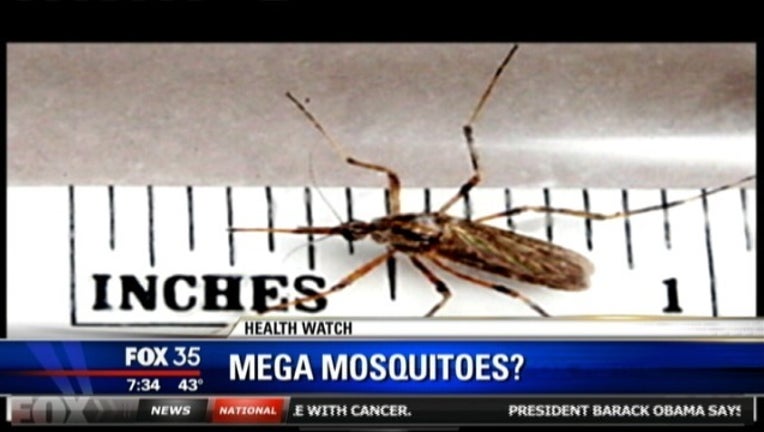 The female galinipper (Psorophora ciliata), a very large mosquito with hairy legs, feeds day and night and are common in Florida.

But major tropical events such as Tropical Storm Debby awakened the dormant galinipper eggs, and scientists are expecting a boom in the next few months.

The galinipper can penetrate through layers of clothing. It will bite pets -- even fish -- out in the wild.

"It's about the size of a quarter. ... It's about 20 times bigger than the sort of typical, Florida mosquito that you find," says Anthony Pelaez of the Museum of Science and Industry in Tampa. "And it's mean, and it goes after people, and it bites, and it hurts."

"In an urban area, it's not really their habitat, so we probably won't see them in the city so to speak," Morse added. "But if you live near a pasture-type of an area, a grassy area that floods, then that's where you would see these mosquitos most likely."

"Are You Kidding Me?": More strange news

There is a silver lining to the galinipper boom: The mega mosquito will eat the larvae of smaller, regular mosquitoes, and they do not spread any human diseases, such as the West Nile virus.

Being bitten by a galinipper "feels like you're being stabbed," said Pelaez, who has been bitten countless times by the galinipper while working for several years in the Amazon.

"This summer it's very important to wear lots of mosquito repellent if you don't want to get bitten by the galinipper," Pelaez said.