The Florida Department of Education provided examples of what it calls problematic elements in recently reviewed math textbooks.

ORLANDO, Fla. - The Florida Department of Education provided examples of what it calls "problematic elements" in recently reviewed math textbooks.

"What? Me? Racist?" That’s the start of a question posed in one of the math textbook sections the Florida Department of Education says crossed the line.

Or how about this: asking students questions based on a graph that shows the levels of racial bias among different age groups.

"I feel like for math, it should be focused more on the numbers," said Seminole County resident Alkendy Theodore.

People we spoke with say it's very different from how previous generations learned math.

"It was the old school. One-plus-one, you went down your columns, carried over, it was very simplified," Winter said.

These are all examples the State Department of Education gave FOX 35 News after we’d been requesting them for a week. Last week, the state announced it was rejecting 54 math books from the curriculum because of references to Critical Race Theory, and more. 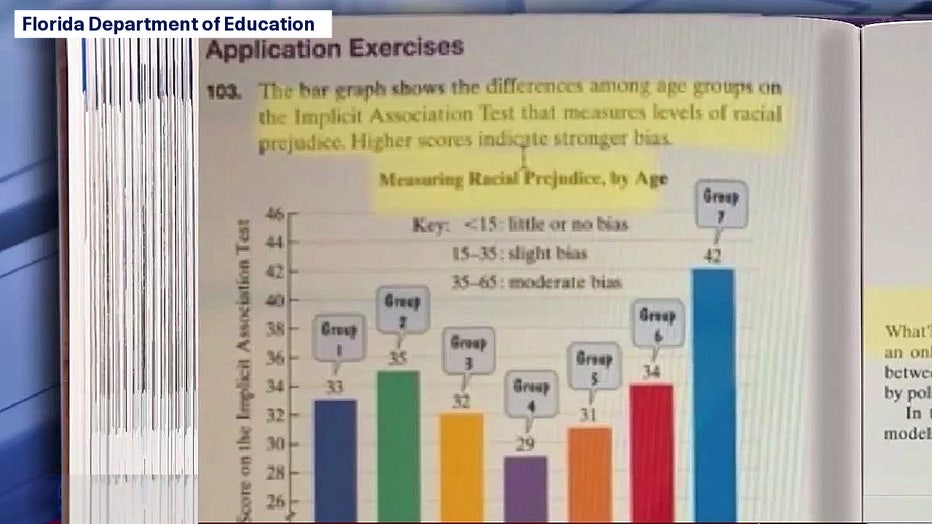 Last week, the State of Florida announced it was rejecting 54 math books from the curriculum because of references to Critical Race Theory, and more.

The state also showed two pieces of text mentioning the importance of "social and emotional learning" or SEL. That’s the practice of teaching children empathy and expressing their emotions freely. The DeSantis administration doesn't want in the curriculum.

"It's surprising they're against having anything with SEL in the textbooks. It's something that has, ever since the Parkland shooting, we have seen such a push for."

We asked for the publisher’s information, so we could reach out and get their response to the controversy, but the state did not provide their information. Modesto says she doesn’t have a problem with incorporating real world issues into the classroom.

"It would be nice that we could say when these doors close there is no aspect of problems on the outside impacting our students, but how realistic really is that?"

Modesto says she does see merit in moving away from the common-core system for teaching math. Publisher McGraw Hill says they’re working with the state to meet its new guidelines.