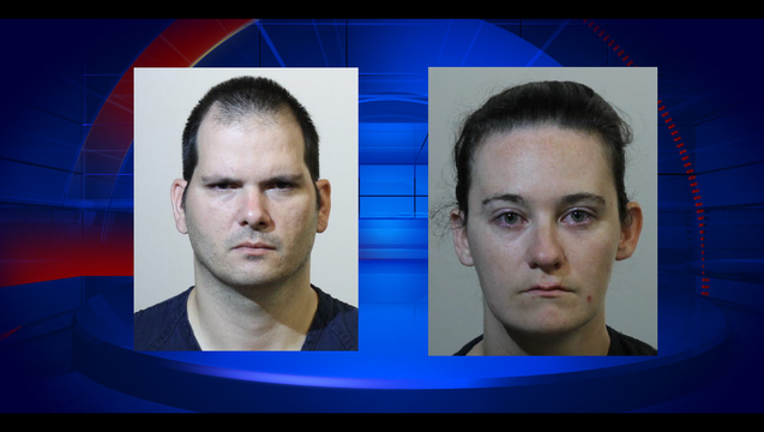 SEMINOLE COUNTY, Fla. (WOFL FOX 35) - Two people have been arrested for performing and allowing multiple causes of abuse onto a child, including with a dog leash.

The Seminole County Sheriff's Office reported observing a child with bruises and red marks throughout her body. The injuries were immediately reported via the Abuse Hotline and transferred to the Seminole County Child Protective Services Unit (CPS).

CPS spoke to the child the next day. They stated that the child disclosed that her injuries are from being beat with a dog leash by a man named David Winters.

Seminole County Sheriff's Office decided to go speak with David Winters at his residence. They stated that Winters admitted to using excessive punishment on the child and even said that he has heavy hands. He is also on record admitting to striking the child multiple times on her belly with an open hand and even using a dog leash to strike her.

David Winters was then placed under arrest for Child Abuse and was booked into the John E. Polk Correctional Facility, reports the Seminole County Sheriff's Office.

Seminole County Sheriff's Office also spoke to Amy Stephens at her residence. She reportedly admitted to witnessing the beatings David Winters gave the child. She also admitted that she never intervened.

Stephens did not defend her lack of action, but it was reported that she defended Winter's actions by blaming his mental capacity at the time. She went on to blame the child as well because of it's behavioral issues.

Seminole County Sheriff's Office also reported placing Amy Stephens under arrest for Child Neglect for a failure to make a responsible effort to protect the child from abuse and for failure to notify anyone of the abuse observed. She was also reportedly booked into the John E. Polk Correctional Facility.