Elena Delle Donne of the Washington Mystics was denied by the league to be exempted from the 2020 season due to her illness putting her at higher risk for contracting the novel coronavirus.

A study analyzing the prevalence of Lyme disease-carrying ticks in Northern California, more commonly associated with wooded habitats, found that the insects were just as abundant in coastal areas.

"Beaches and lizard habitats can no longer be considered havens from ticks," said Linda Giampa, executive director at Bay Area Lyme Foundation, which funded the research. "Based on this new data, we are now encouraging residents to take preventative measures in beach areas and encouraging healthcare providers to learn the symptoms of tick-borne infections beyond Lyme disease."

The study, published Friday in the journal of Applied and Environmental Microbiology, noted that the black-legged ticks carrying Borrelia burgdorferi — the bacterium that causes Lyme disease — were found in beach areas at equal rates to woodland habitats.

Researchers said that the insects were not necessarily found on the beach, but in the brush and grassy areas next to the sand along coastal areas of northwestern California. The researchers found the presence of Borrelia burgdorferi in 2.9% of adult ticks in the study. 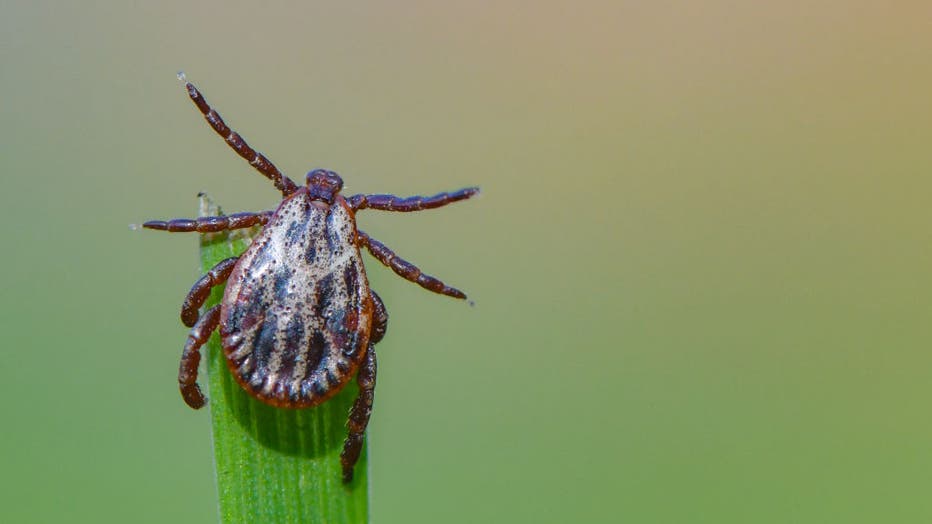 FILE - A tick sits on the tip of a blade of grass in a file image taken Sept. 7, 2020. (Photo by Patrick Pleul/picture alliance via Getty Images)

The researchers, who tested ticks for up to five different species of tick-borne bacteria, found that the collective infection rate of all bacteria species was as high as 31% in at least one area. Previous studies have only tested for a single species of bacteria in specific areas.

"The high rate of disease-carrying ticks in the coastal chaparral was really surprising to us. And when looking at all the tick-borne pathogens simultaneously, it makes you rethink the local disease risk," said lead study author Daniel Salkeld, Ph.D., from Colorado State University.

The grey squirrel, known to be the primary tick host in northwestern California, doesn’t live in coastal areas. It’s speculated that the hosts could be rabbits, voles or the white-footed mouse, but the study authors noted that more research is needed to better understand which animals could be bringing the infected ticks to beach areas.

"Using tick-borne diseases in California, we show that there is often a bias to our understanding and that studies tend to focus on particular habitats e.g., Lyme disease in oak woodlands. Other habitats may harbor a surprising diversity of tick-borne pathogens but have been neglected, e.g., coastal chaparral," the study authors wrote.

Lyme disease is the most common vector-borne disease in the U.S., transmitted to humans through infected, black-legged tick bites. It’s generally diagnosed based on symptoms, physical findings like a rash, and the possibility that the person was exposed to infected ticks.

The U.S. Centers for Disease Control and Prevention estimates that roughly 476,000 Americans get Lyme disease each year.

Early signs and symptoms of Lyme disease can include fever, chills, headache, fatigue, muscle and joint aches, and swollen lymph nodes in the absence of rash, the CDC says on its website. People treated with antibiotics in the early stages of Lyme disease usually recover rapidly and completely, the agency adds.

RELATED: Some symptoms of Lyme disease are similar to COVID-19, health officials say

If untreated, it can lead to a wide range of symptoms, including fever, rash, facial paralysis and arthritis.

The Bay Area Lyme Foundation says prompt and proper tick removal is key to preventing Lyme disease. After spending time outdoors where ticks could be prevalent, check for the insects under the arms, in and around the ears, inside the belly button, behind the knees, between the legs, around the waist and especially in the hair.

"A warm shower or bath will wash away ticks, particularly in hard-to-reach areas, that have not yet become engorged. You want to remove the tick within 24 hours. Clothes should also be washed in hot water and/or placed in a hot dryer for one hour," the foundation advises.

Dogs and cats can also get Lyme disease, so pets should be checked regularly as well.