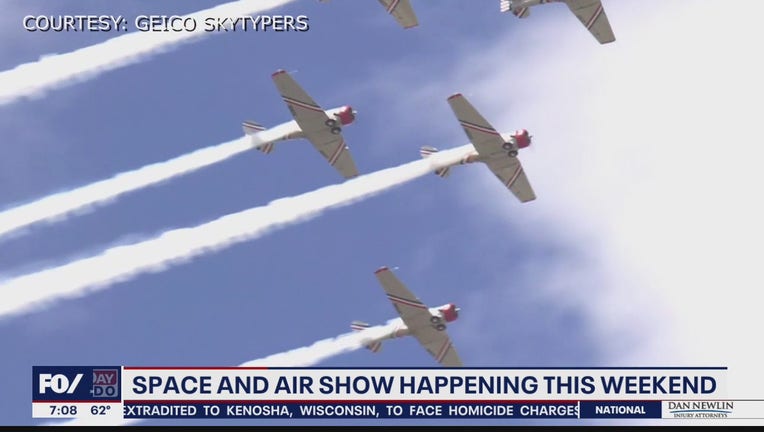 SANFORD, Fla. - Airplanes showed-off for the crowds, soaring high above Sanford’s airport, as part of the Lockheed Martin Space & Air Show on Saturday.

“It's been a long time since we've have a full-blown air show, here in Sanford,” said Chris Hunt, who was watching the show.

Legions of spectators all sat apart for social-distancing, and taking other steps to watch the show safely.

“I think people need to be socialized and out and realize that even though we're in this together, we can still be a community,” said spectator Cindy Thomas.

Skydivers, and aircraft both old and new, were there to wow the fans. There was also tremendous military hardware on display today, at the show. This included two  F-35 Lightning IIs, a pair of F-22 Raptors, and even a couple of F-16 Vipers. Organizers said it was very rare to have all these different jets together in one show.

Space and air show happening this weekend in Sanford

The Lockheed Martin Space and Air Show is happening this weekend at the Orlando Sanford International Airport. It's one of the country's first air shows since many were canceled due to the pandemic.

Also showing up was the A-10 thunderbolt, affectionately known as the "warthog."

Lesh has flown the A-10 in combat, in Afghanistan.

“Being able to provide support over the battleground for long periods of time, and then at a moment's notice being able to roll in and lay down weapons on-target.”

This being 75 years since the end of World War II, they also had planes from that era taking part.

“The history of this aircraft and what that generation accomplished for us in terms of preserving our freedom, is immeasurable,” said Steve Kapur, a vintage plane pilot.

The air show also runs on Sunday. For safety reasons they’ve only been selling tickets online or over the phone.