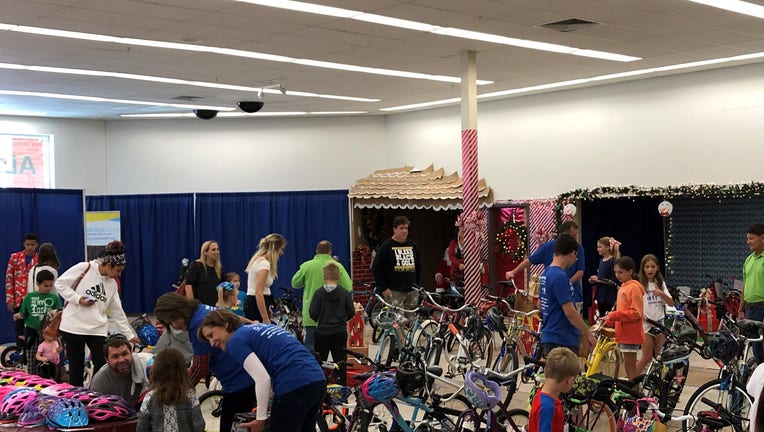 ALTAMONTE SPRINGS, Fla. - For hundreds of less fortunate families, it was a day to remember – tables and tables of free toys for their children.

“We can always use extra help this time of year, so it helps out a lot!” said Michael Green, who was there with his kids.

There were bicycles, balls, stakeboards, scooters and more.

Parents were allowed to take one holiday gift per child.

“With a big family and one income, I was told about this foundation and we came a couple of years and we loved it!” said Esther Fomby.

It was the sixth year the Jordan Smelski Foundation was hosting this giveaway.

Even Santa showed up.

Organizers Shelly and Steve Smelski said they had about $10,000 of free sporting goods to give away on Saturday and Sunday.

“It's very exciting and very emotional at the same time. It's an awesome opportunity for us to be reminded of the love for our son and the ability to give back,” Shelly Smelski said.

Their son, Jordan, died in 2014 after swimming in a spring and being infected by naegleria fowleri, the so-called "brain eating amoeba."

Now the Jordan Smelski Foundation spreads awareness about the disease and raises money for research.

They hold this toy giveaway every December in Jordan’s memory.

“It's become our Christmas, so we look forward to it. We're nervous, but it's emotional, too,” Steve Smelski said.

This year's giveaway was at the former Walgreens on State Road 436.

They were open again Sunday from 10 a.m. until they ran out of toys.

“Stuff they probably wanted anyway,” said a grateful Michael Green, “but now one less thing Santa has to bring.”