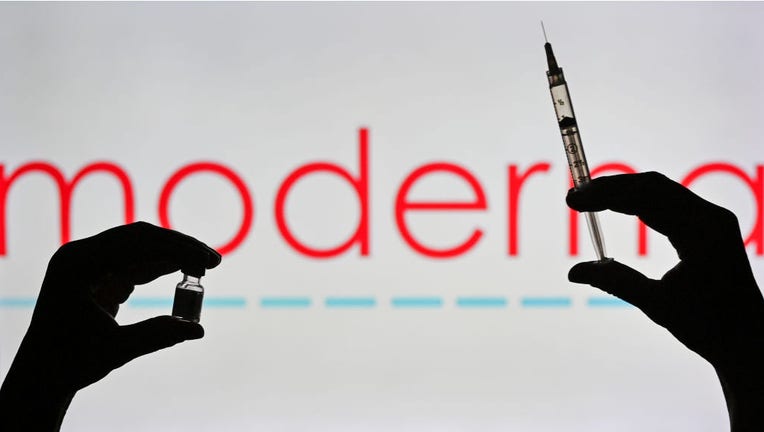 An illustrative image of a person holding a medical syringe and a Covid-19 vaccine vial in front of the Moderna logo displayed on a screen. On Wednesday, January 12, 2021, in Edmonton, Alberta, Canada. (Artur Widak/NurPhoto via Getty Images)

COVID-19 vaccine maker Moderna is suing Pfizer and the German drugmaker BioNTech, accusing its main competitors of copying Moderna’s technology in order to make their own vaccine.

Moderna said Friday that Pfizer and BioNTech’s vaccine Comirnaty infringes on patents Moderna filed several years ago protecting the technology behind its preventive shot, Spikevax. The company filed patent infringement lawsuits in both U.S. federal court and a German court.

Pfizer spokeswoman Pam Eisele said the company had not fully reviewed Moderna’s lawsuit, but the drugmaker was surprised by it, given that their vaccine is based on proprietary technology developed by both BioNTech and Pfizer.

She said in an email that Pfizer Inc., based in New York, would "vigorously defend" against any allegations in the case.
BioNTech did not immediately respond to a request from The Associated Press seeking comment.

Moderna and Pfizer’s two-shot vaccines both use mRNA technology to help people fight the coronavirus.

"When COVID-19 emerged, neither Pfizer nor BioNTech had Moderna’s level of experience with developing mRNA vaccines for coronaviruses," the company said in a complaint filed Friday in the U.S. District Court for the District of Massachusetts.

The mRNA vaccines work by injecting a genetic code for the spike protein that coats the surface of the coronavirus. That code, the mRNA, is encased in a little ball of fat, and instructs the body’s cells to make some harmless spike copies that train the immune system to recognize the real virus.

That approach is radically different than how vaccines have traditionally been made.

Moderna said it started developing its mRNA technology platform in 2010, and that helped the company quickly produce its COVID-19 vaccine after the pandemic arrived in early 2020.

By the end of that year, U.S. regulators had cleared shots from both Pfizer and Moderna for use after clinical research showed that both were highly effective.

Moderna CEO Stephane Bancel said in a prepared statement that the vaccine developer pioneered that technology and invested billions of dollars in creating it.

Moderna worked with scientists at the National Institutes of Health to test and develop its COVID-19 vaccine. The company said its lawsuit is not related to any patent rights generated during that collaboration.

The company said it believes its rivals’ vaccine infringes on patents Moderna filed between 2010 and 2016.

Moderna said in its complaint that Pfizer and BioNTech copied some critical features of its technology, including making the "exact same chemical modification to their mRNA that Moderna scientists first developed years earlier" and went on to use in Spikevax.

Moderna said it recognizes the importance of vaccine access and is not seeking to remove Comirnaty from the market. It also is not asking for an injunction to prevent future sales.

Moderna said in 2020 that it would not enforce its COVID-19 related patents while the pandemic continued. But the company said in March, with vaccine supplies improving globally, that it would update that pledge.

It said it still would not enforce its patents for vaccines used in low- and middle-income countries. But it expected companies like Pfizer and BioNTech to respect its intellectual property, and it would consider "a commercially reasonable license" in other markets if they requested one.

"Pfizer and BioNTech have failed to do so," Moderna said in a statement.

Pfizer’s Comirnaty brought in more than $36 billion in sales globally last year, and analysts expect it to bring in nearly $33 billion this year, according to FactSet.

Moderna Inc. booked $17.6 billion in revenue from its vaccine last year. Analysts project more than $21 billion in 2022. Spikevax is Moderna's only product on the market, but it is using developing other vaccines using the mRNA technology.
The Cambridge, Massachusetts company's stock trades publicly under the ticker symbol MRNA.