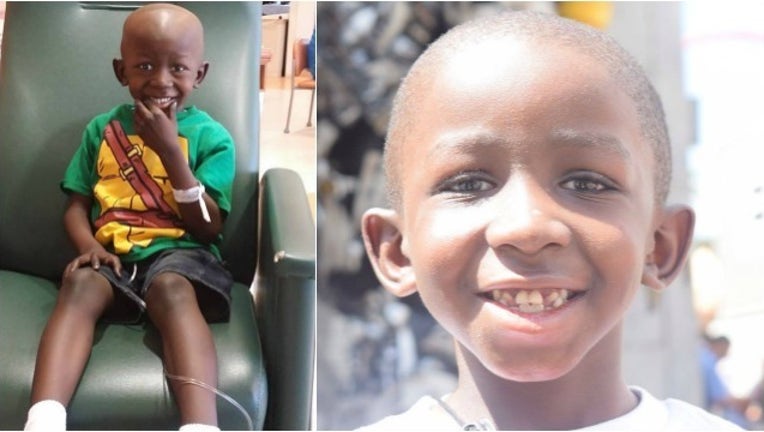 In May of 2013, when he was just 2-years-old, Stephen “Duane” Butler Jr. was diagnosed with neuroblastoma and after having what was said to be a simple surgery, his right kidney was removed. His family said that surgery turned out to be lifesaving and after it he was doing well in school and living life as a normal 4-year-old. However, last year he started to complain of unexpected leg pain and that’s when doctors found that the cancer had relapsed. The stage 4 cancer spread to his spine and bones.

Duane had had six rounds of chemo and minor complications along the way, according to his family. The week before Christmas, Duane had a bone marrow transplant and spent the holidays at Children’s Healthcare of Atlanta. He received treatment until mid-January.

On February 18, Duane had his final day of radiation.

"All of Duane's scans, bone marrow and labs came back negative," mother Claudia Scott previously said on Facebook. "His kidney function, which had us and the doctors concerned, is now working normal. That means God is healing. We are having a great week."

Duane finished his final phase of treatment toward survivorship, antibody treatment, at the end of July.

"We recently came back from his make a wish trip to Disney," Scott told FOX 5's Katie Muse. "We just await scans to see if we continue with treatment or we work toward remission."

We learned about Duane’s battle with cancer through photographer Brandy Angel, who featured him on her website “Be The Change.” Angel works with both adults and children in need and helps share their stories and raise awareness through social media.

This was a big week for Duane. Not only did he turn six, but he started kindergarten on Monday. For his birthday, Scott said they will go to a water park this weekend. Wednesday, Duane will enjoy a dinner of his choice, a trip to Toys "R" Us and some relaxing time with his family.

"This year we will celebrate with him at home, not in a hospital," Scott said on Facebook.

Scott said Duane, who is in remission, has about two more years of scans and monitoring. A GoFundMe account has been set up to help pay for Duane's medical expenses. If you would like to donate, click here.