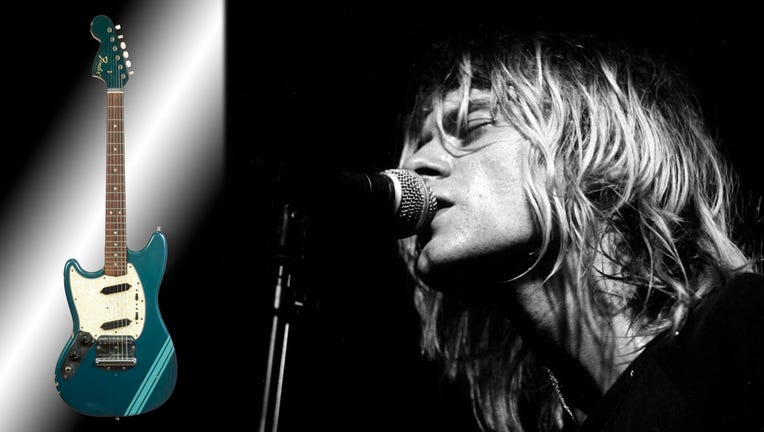 LOS ANGELES - Kurt Cobain’s Fender Mustang, the blue guitar that he played in Nirvana’s iconic 1991 "Smells Like Teen Spirit" music video, is going up for auction and is anticipated to sell for up to $800,000.

"Smells Like Teen Spirit" was Nirvana’s breakout single from its second album "Nevermind." The success of the song and music video on MTV catapulted the album to the top of several music charts and is often credited as the moment when grunge music entered the mainstream.

Julien’s Auctions noted how the Generation X anthem "turned the underground Seattle based trio, Kurt Cobain, Krist Novoselic and Dave Grohl, overnight into the biggest band in the world, bursting on the music scene and pop culture zeitgeist with an explosion of energy unlike anything felt or seen before in rock history."

The "Smells Like Teen Spirit" music video depicted Nirvana performing the song at a high school pep rally, which turns into a mosh pit frenzy. The video was quietly released on Sept. 29, 1991, on MTV’s "120 Minutes," propelling the band into superstardom.

"I’m left-handed, and it’s not very easy to find reasonably priced, high-quality left-handed guitars. But out of all the guitars in the whole world, the Fender Mustang is my favorite. I’ve only owned two of them," Cobain told the outlet.

For the past 12 years, the guitar has been on display at Seattle’s Experience Music Project, now named the Museum of Pop Culture (MoPOP), the auction house said.

In addition to the guitar itself, Julien’s Auctions is also offering an exclusive NFT — a 360°digital representation of the Fender guitar— along with a minted narration by Cobain’s long-time guitar tech, Earnie Bailey, discussing the historical significance of the instrument. This is also excited to fetch between $6,000 to $8,000, the company said.

Julien’s Auctions said a portion of the proceeds from the auction will benefit "Kicking the Stigma," an Indianapolis Colts and Jim Irsay family’s national initiative to raise awareness about mental health disorders.

Other Kurt Cobain items going up for auction

Another auction highlight will include Cobain’s 1965 Dodge Dart 170 4-door sedan, which is the only known surviving car that was owned and driven by the famed musician, according to the auction house. The car is "conservatively estimated" at $400,000 to $600,000.

After Cobain’s death, Courtney Love sold the vehicle to his sister, Kim Cobain, who has owned it for the past 28 years.

"The roadworthy vehicle has a new water pump, gas tank, heater core and repairs made to the radiator, in which Kim personally worked on alongside her mechanic. Also included with the Dodge Dart is the vehicle's original license plates, and a vehicle title showing ownership by Kurt Cobain and Courtney Love," Julien's Auctions said.

Also up for auction will be Cobain’s hand-drawn 1985 Iron Maiden "Killers" skateboard deck artwork featuring the Iron Maiden mascot "Eddie" plus NFT — estimated to sell for $20,000 to $40,000. The auction house said Cobain was creating artwork on skateboard decks and T-shirts as a way of earning money at the time it was created.

An original artwork by famed musician Kurt Cobain featuring the Iron Maiden mascot "Eddie" from the album Killers. The artwork was completed on a SIMS skateboard deck in February 1985. During this time, Kurt aimed to create custom artwork on skateboard decks and t-shirts as a way of earning money. (Photo: Provided / Julien's Auctions)

Other Cobain artwork includes an illustration of Michael Jackson plus NFT for between $40,000 to $60,000. 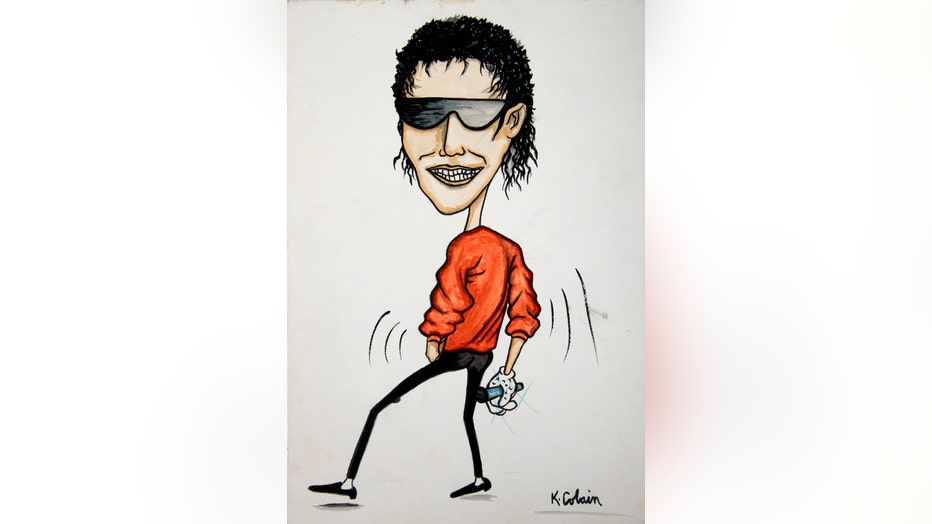 Cobain’s personally-owned Pokey toy, a bendable figure from the clay animation series Gumby inscribed with "Nirvana" on one side, is expected to fetch between $2,000 to $3,000. 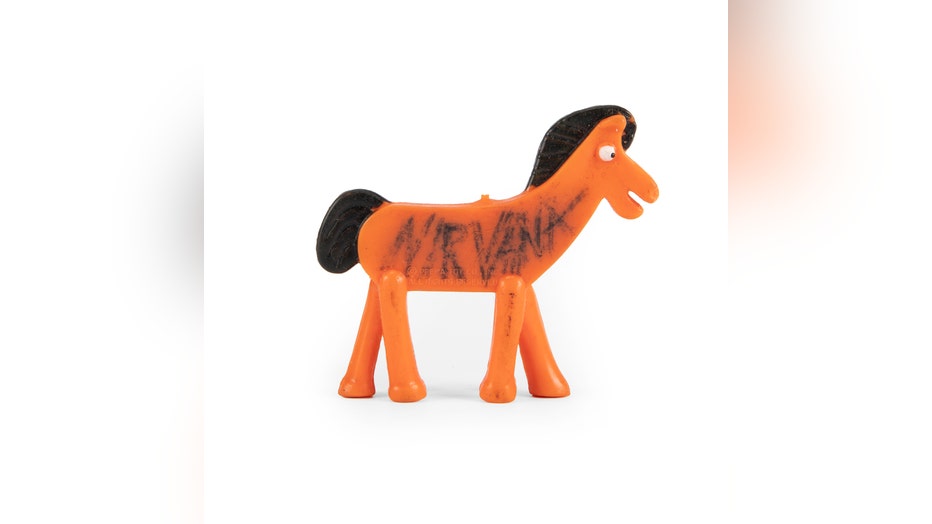 A child at heart, this Pokey bendable figure from the clay animation series Gumby was personally owned by famed musician Kurt Cobain. This figure is inscribed "Nirvana" on one side and features an illegible inscription on the opposite side. (Photo: P

An original United Airlines boarding pass belonging to famed musician Kurt Cobain for a flight from Seattle, Washington to O'Hare International Airport in Chicago, Illinois on April 20th. The year of the flight is unknown.(Photo: Provided / Julien's Auctions)