Kemp, Lt. Gov. Geoff Duncan, House Speaker David Ralston, and officials with the Department of Public Health, GEMA, and the Georgia National Guard discussed the issue at a briefing at the state Capitol Monday at 4 p.m.

The current White House criteria to reopen America includes three phases, and Kemp said that the state was "on track to meet the criteria for Phase One” by having adequate testing, hospital capacity, and contact tracing of the virus. 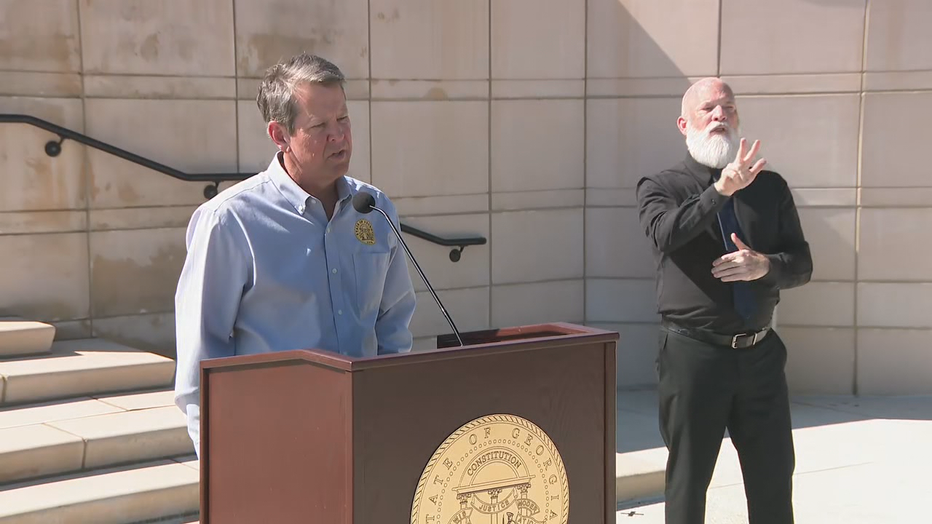 Kemp brought up the struggles of contract workers, small businesses, and Georgia farmers, saying that he "hears the concerns of those I am honored to serve" and that the state has been seeing positive signs that lead him to start the process of reopening the state.

The governor mentioned that one of the major focuses to meet the requirements of President Donald Trump's guidelines would be testing. In order to do so, the state would be partnering with the Georgia Health system to "double down" on testing capacity.

"Testing defines the battlefield and aids our long term strategy," Kemp said, bringing up that the National Guard would be working with GEMA to help with testing thousands of Georgians.

With the latest coronavirus cases, Kemp said the state was a place on the curve that hospitals could resume elective surgeries which were deemed essential.

Kemp said the reopening of these businesses "would not be business-as-usual" and would require companies to implement changes to ensure sanitation mandates and social distancing.

The governor also said that movie theaters and restaurants, which were previously banned from in-person dining, would be allowed to reopen on Monday, April 27 with certain restrictions to be announced later this week. That delay would allow Georgia more time to flatten the curve and allow the businesses to prepare to be ready to open.

"By taking this measured action, we will get Georgians back to work safely, without undermining the progress we all have made in this battle against COVID-19," Kemp said. "Today's announcement is a small step forward and should be treated as such." 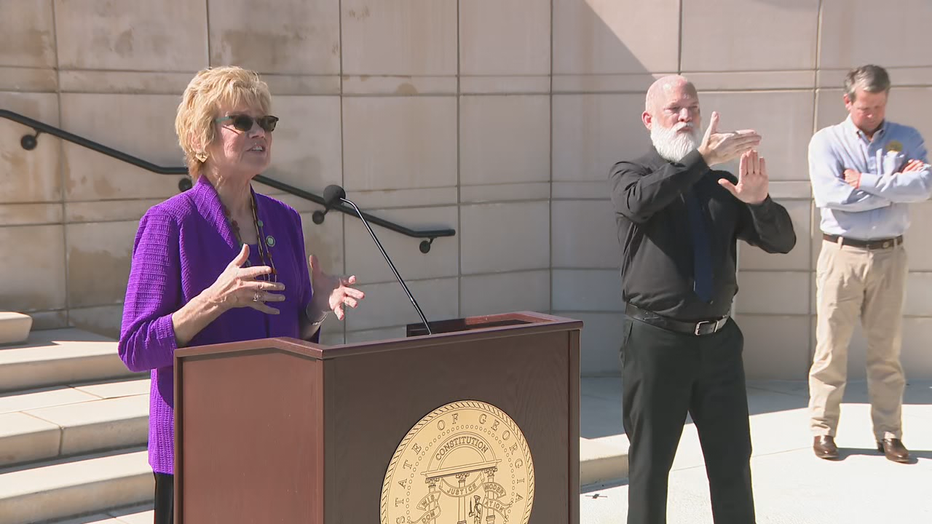 "We definitely have a plateauing and what appears now, a decline," Dr. Kathleen Toomey said (Photo: FOX 5 Atlanta).

"Georgians who are small business owners, those people have good common sense and we're trusting them to use it, but if they abuse it, we will take further action," Kemp said. "But I believe they can do it as part of this measured approach."

While Georgians may be cautious going back to businesses, Kemp said that he hopes the private sector could help convince them.

"If they don’t, we have the ability to act on that,” he said.

The governor also urged religious institutions to continue to help with social distancing. He asked faith leaders to heed the advice of the Centers for Disease Control and Prevention and continue drive-in and online services to help with those guidelines.

Georgia DPH Commissioner Dr. Kathleen Toomey and state officials discusses the data that is driving the decision to slowly begin to reopen the state.

"I think this is the right approach at the right time," Kemp said. "It's not just throwing the keys back to the owners of the businesses."

Kemp said with the reopenings he expected cases of the virus to increase, but believed that the state would be able to stay on top of it with increased hospital capacity. State officials would also be on the lookout for any possible hot spots for the virus.

"These are tough decisions, no doubt. And I will have to make more of them," Kemp said, adding that he didn't "give a damn about politics right now" when asked what the political impact of his decisions might be.

Kemp: 'I don't give a damn about politics right now'

Gov. Brian Kemp spoke candidly when asked how the decisions he is making in Georgia's COVID-19 response have weighed on him.

Dr. Kathleen E. Toomey, commissioner of the Georgia Department of Public Health said that the state's decision to slowly begin to reopen has been driven by data collected about coronavirus cases.

She credited that with the healthcare system being aggressive and expanded testing.

The announcement comes after the Trump administration hosted a call with southeastern governors, including Kemp and the governors of Alabama, Tennessee, South Carolina, Mississippi, and Florida. Kemp tweeted over the weekend that the call involved discussing approaches to reopening their states’ economies.

Over the weekend, leaders in both Alabama and Florida outlined their plans to reopen the states. South Carolina is also expected to be reopening retail stores and public beach access points Tuesday.

In addition to calls from President Donald Trump, Kemp has heard scattered public calls in Georgia to lift restrictions.

“If we continue on the path we are headed down, we will totally destroy not only the U.S. economy, but also the world economy,” he said.

Health officials say Georgia’s death toll from COVID-19 has risen above 700 as new numbers were reported Monday at noon. At least 733 deaths statewide have been linked to the virus, the Georgia Department of Public Health said. Infections have been confirmed in nearly 19,000 people.

Georgia had 1,664 cases of COVID-19 in 230 nursing homes, assisted living centers and other similar facilities as of Friday, according to a list published by the state Department of Community Health. That included 250 resident deaths.

HOW COVID-19 IS IMPACTING GEORGIA

There were also 830 staff members in those facilities who had tested positive.

The PruittHealth Palmyra nursing home in Albany is listed with 106 infections, 16 resident deaths and 45 infected staff members, the worst in all categories. 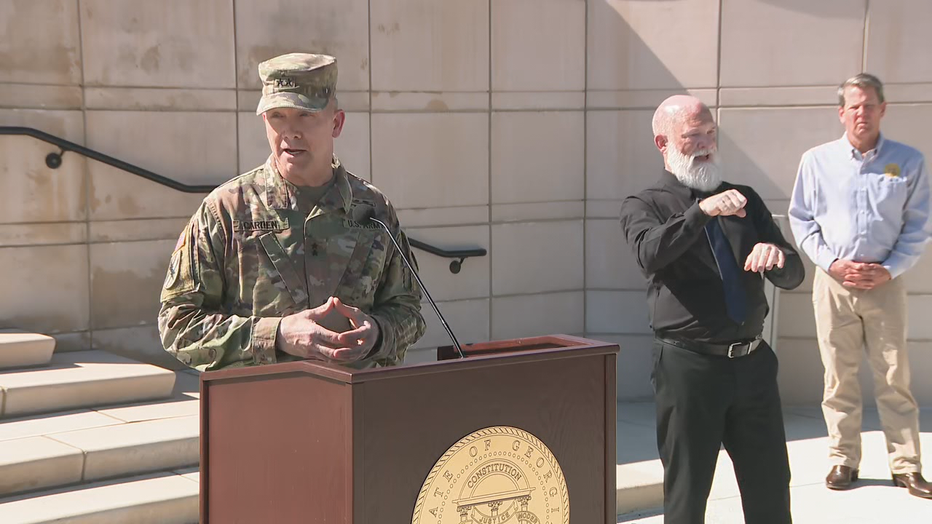 As of Monday, the Georgia National Guard has sanitized 523 longterm care facilities - about 66 percent of 790 facilities across the state.

The Guard will be setting up a 24/7 operation center out of August University which General Carden called the "unblinking eye" on coronavirus for the state. The idea is to make sure they can "paint the picture" of the situation in Georgia as it slowly reopens.

The Guard strike teams tested 963 Georgians in long-term care facilities and first responders over the weekend said they plan to test another 1,500 Georgians Monday. The general said they are limited only by the number of tests.

"My goal is to drive it until the system breaks," the general said, adding that specifical testing goals are not realistic and that the additional testing moved Georgia from being 45th in the country on testing to 28th.

For most people, the coronavirus that caused this year’s pandemic causes mild or moderate symptoms. For some, it can cause severe illness such as pneumonia, or even death.