Video shows two women in Tampa trying to get a baby alligator out of their home.

TAMPA, Fla. - Two Florida women documented their hilarious adventure of trying to get a baby alligator out of their home that snuck in through a sliding glass door.

Sazan Powers says her next-door neighbor, Ericka, called her and told her that there was an alligator in her Tampa home. Powers immediately went over and discovered a baby gator.

"We can't get this thing out. It's trying to attack the Swiffer," Powers says in the video as she stands on the counter away from the 'ferocious' beast. "This thing is hissing at us. It tried to eat this."

Two women posted a hilarious viral video of them trying to remove a baby gator from a home. They join Good Day Orlando to talk about it.

The little gator is seen staying close to the wall as the women try and call people to come and help them out.

Powers said that Ericka had left the sliding glass door open and that her dog started to bark at the gator. That's when she saw it, freaked out and called Powers for reinforcement. The women barricaded the gator with empty TV boxes to keep it from running further into the house. 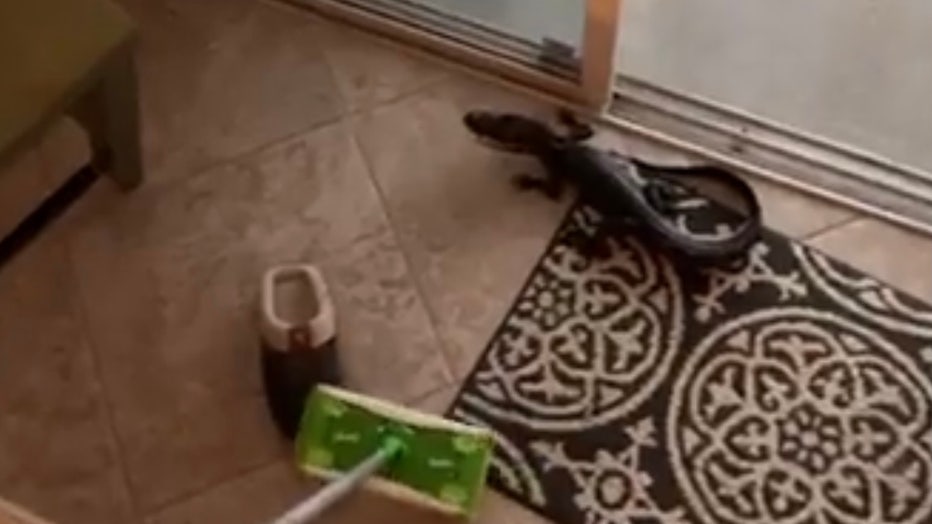 Powers tries to nudge it toward the door with a Swiffer, but it doesn't seem to help.

Eventually, the little guy made its way toward the back door and scurries away into the grass.

"Thanks for hanging out!" Powers yells. "They're so cute when they're not in your home."

She tells FOX 35 News that she has lived in Florida for 7 years and this was her first gator encounter inside of a home.

Watch Good Day Orlando on Thursday when the women join us to talk about their crazy adventure with the alligator.