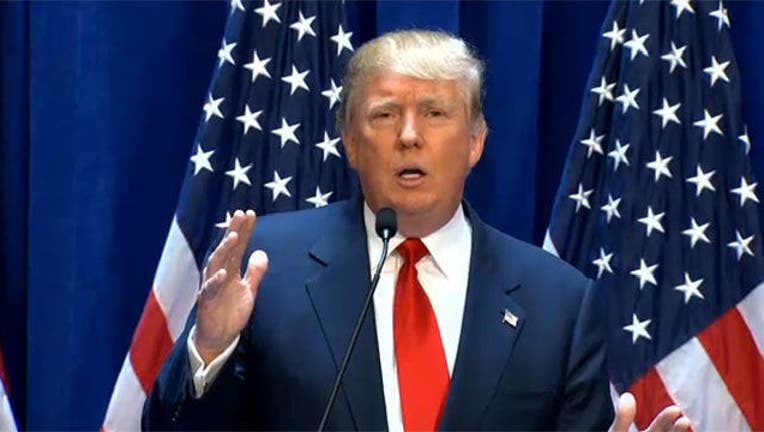 A news conference was set for Saturday for the two men who will take on Hillary Clinton and her Democratic running mate in November.

Trump offered the vice presidential spot to Pence Thursday, and the governor boarded a plane for New York in anticipation of a Friday announcement, according to a Republican with knowledge of the process. But shortly after Pence arrived, Trump abruptly said he was postponing an announcement because of the deadly attack in Nice, France, that left more than 80 people dead.

The staunchly conservative Pence, who is 57, served six terms in Congress before being elected governor and could help Trump navigate Capitol Hill. He's well-regarded by evangelical Christians, particularly after signing a law that critics said would allow businesses to deny service to gay people for religious reasons.

Trump's announcement came about an hour before a deadline for Pence to withdraw from his re-election race in Indiana. State law prohibits candidates from being on the ballot in two races.

Trump's hectic decision-making process was made more complicated by the fact that the businessman was in California Thursday for a series of fundraisers, isolated from nearly all of his closest advisers, including his three adult children and his campaign chairman, Paul Manafort.

Frustration among Trump and his advisers mounted because of news reports that Pence was the pick, sending top aides scrambling to insist no final decision had been made.

The billionaire said in a series of television interviews Thursday night that he'd not yet settled on a "final, final" choice, leaving open the possibility the unpredictable presumptive nominee could change his mind.

But Manafort dismissed suggestions in an interview on Fox News Channel that Trump was having second thoughts about his choice. He said Trump was planning on making an announcement this weekend.

A second Republican said Friday he spoke to Trump on Thursday morning, and the New York real estate mogul said he had chosen Pence and would be calling the governor to make the offer and ask him to fly to New York.

That Republican also spoke on condition of anonymity, because the person was not authorized to publicly discuss the conversation.

Trump's choice of Pence as his running mate adds political experience — and a dose of unflappability — to the Republican presidential ticket.

Pence would be a reliably conservative No. 2 with a calm demeanor and deep ties to Washington. His apparent selection signals Trump is serious about addressing GOP concerns about his own conservative credentials and lack of Washington experience.

In a brief interview with The Associated Press Friday morning, Gingrich said he had still not been told by Trump that he would not be the choice.

Trump was up against a clock in unveiling his pick. In addition to Pence's deadline in Indiana, the Republican convention kicks off in Cleveland Monday.

Top party officials are already in Cleveland, where a committee voted late Thursday to rebuff a push to let delegates vote for any presidential candidate they'd like. It was a major blow to Republican foes of Trump who have been working to try to thwart his nomination.

Pence would have the backing of GOP leaders and ease some of their concerns about Trump's political inexperience and volatile temperament.

Pence also has influential allies in Trump's inner circle. But some of Trump's children, who have been closely advising their father, were said to favor different candidates.


Copyright 2016 The Associated Press. All rights reserved. This material may not be published, broadcast, rewritten or redistributed.