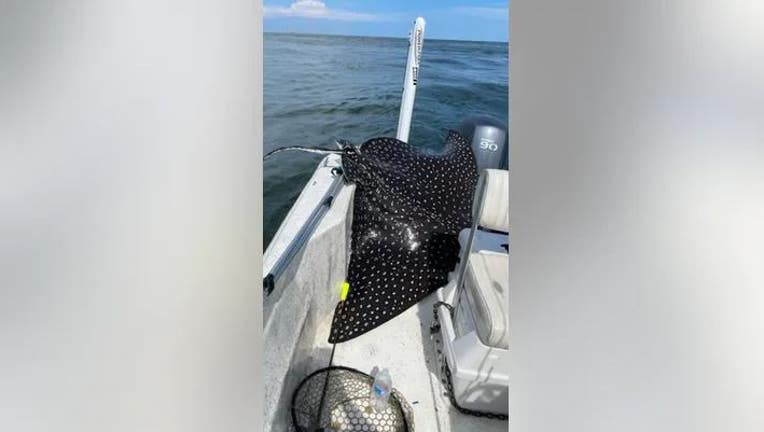 April Jones stook this picture of the spotted eagle ray that landed in her family's boat last week off the coast of the Sand Island Lighthouse, near Dauphin Island, Alabama. "Due to her weight," the ray couldn't "get herself out" again, said Jones. (

DAUPHIN ISLAND, Ala. - When an Alabama family set out to wrangle a big fish for the 2022 Alabama Deep Sea Fishing Rodeo, the last thing they expected was to see a rare spotted eagle ray come flopping into their boat.

April Jones, along with her son, husband and father-in-law, were fishing off the waters of the Sand Island Lighthouse near Dauphin Island, Alabama, last Friday.

That's when the estimated 400-pound ray jumped out of the water and landed in their boat — smacking into Jones along the way.

Jones told Fox News Digital in an interview this week, "We were participating in the Alabama Deep Sea Fishing Rodeo. We were out fishing off the coast of the Sand Island Lighthouse on Friday and I wasn’t catching anything — but my husband, husband’s father and son all were."

QUIZ: NAME THAT BIRD! CAN YOU MATCH THESE BEAUTIFUL BIRDS WTH THEIR CORRECT NAMES?

She said, "We were trying to get a fish for me to catch. So I told them I was ready to leave and head to a different spot. We packed everything up — and as we were pulling away, there was a hard hit and a water splash."

"I felt something hit me," she added, "and then I see this big blob flopping around in the back of the boat."

"We made some calls" for help, she said, to try getting it out — "but she was so heavy that she was also weighing the boat down, and we were getting water in the back of the boat."

"We made the decision to get back to shore."

"I ran into the lab to see if anyone could help get her out. In the meantime, some people had come to the boat and helped her get out."

Jones said the family "just wanted to make sure she was kept alive, so we were dumping water on her and it was about a 15- or 20-minute boat ride back to shore."

"We drove to the closest boat launch, which happened to be where the Dauphin Island Sea Lab was," Jones added. "I ran into the lab to see if anyone could help get her out. In the meantime, some people had come to the boat and helped her get out."

It was only then, she noted, "that we found out she had delivered four babies. We had no idea when she did it. They were not moving." 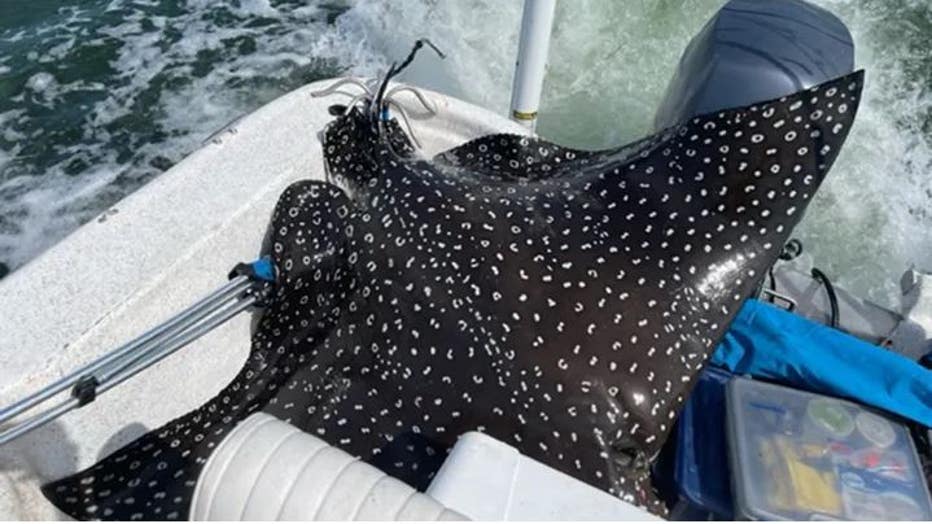 This rare spotted eagle ray was estimated to weigh about 400 pounds. (April Jones )

Jones said that when staff from the Sea Lab saw them, they determined "they were not alive — so we donated them to the Sea Lab. They said they would use them to show kids and tell the story about [the] mom — and how rare it was to see an eagle ray."

"What we learned from the lab about stingrays," added Jones, "is if they are in any type of stressful situation, they will give birth."

"We don’t know how far along these babies were. We were told she jumped because a remora, or suckerfish, was likely stuck to her. And by flying out of the water — if it had landed in the water — the sucker fish would’ve fallen off."

"It's not uncommon for wild animals to release their young when they feel their life is in danger."

Jones said the people who helped her husband "guessed the ray's weight to be 400 pounds.  We think she was about 7 feet wide, spread out. The tail was very long, and it looks like the barbs were at the end of her body, not her tail."

Jones noted that she wasn't stung when the ray hit her, "but half of her body hit half of mine.  So that night I went to the ER, and they said I most likely had a shoulder strain … I wanted to make sure I had nothing worse." 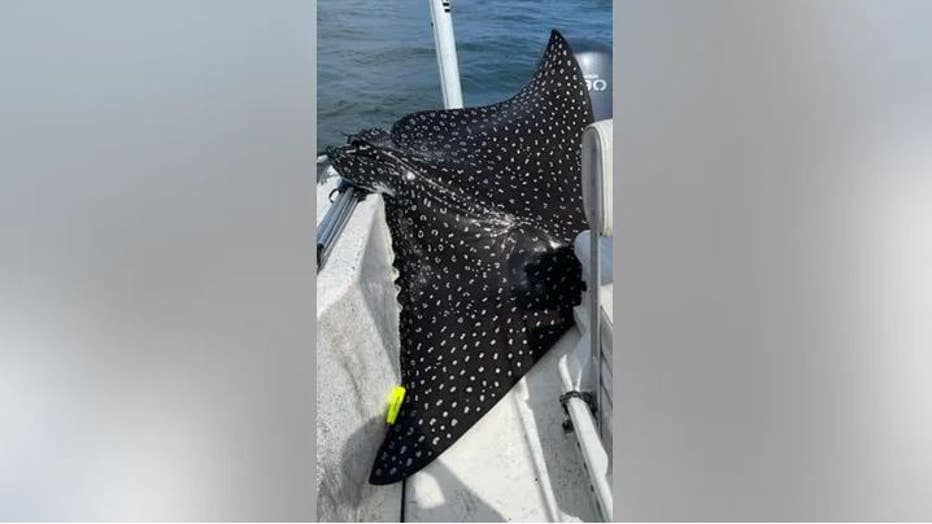 Brian Jones, curator of the Alabama Aquarium, Dauphin Island Sea Lab, told Fox News Digital, "It's not uncommon for wild animals to release their young when they feel their life is in danger. This is surely an adaptation that gives the parents a better chance at producing offspring and passing along their genes in the population."

He said that ray species "are known to produce young when captured by fishermen. Occasionally, these young are fully developed and are able to swim away successfully. At other times, the young are produced prematurely and do not survive." 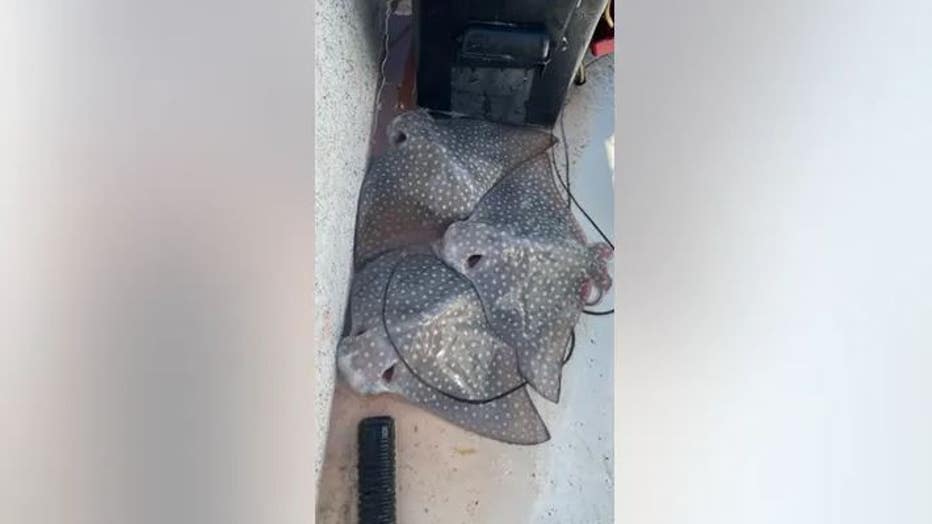 "It's difficult to tell from their appearance," he said, "if the young spotted eagle rays from this encounter were stillborn or not. I'm fairly confident the family would have noticed them on the deck of their boat if the pups were alive and well." 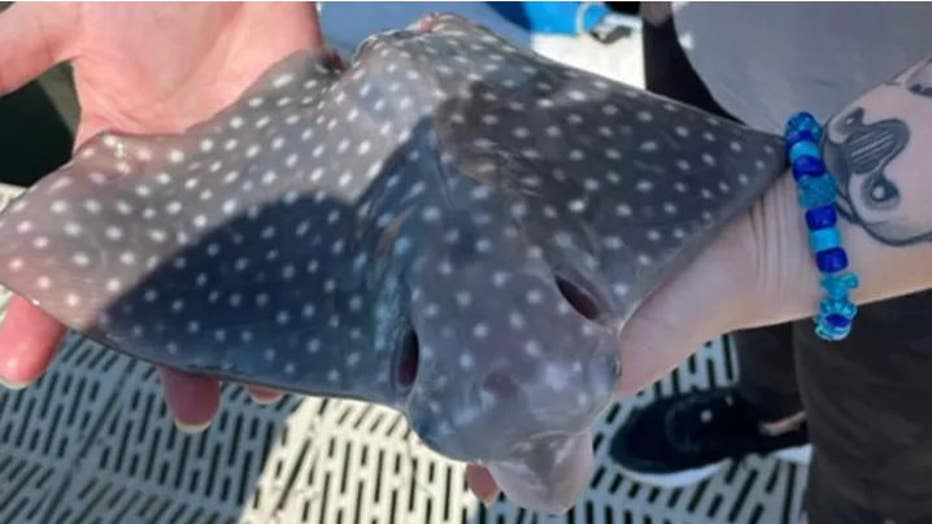 This newly born sting ray baby did not survive, but the family donated the four pups to the sea lab for further study. (April Jones )

He said the species can reach 10 feet across — fin tip to tip — "can have a tail that is three times the length of its body and can have as many as 6 pups."

"Other large ray species in our area — mantas and cow-nose rays — typically have only one pup each year," he said.

The rare ray was released back into the water.

Spotted eagle rays can be found worldwide in tropical and temperate ocean waters. The northern Gulf of Mexico is at the north end of their range.

"In 25 years of studying and working at the Dauphin Island Sea Lab, I've seen only 5 spotted eagle rays," noted Jones.