A Florida bartender who hopped over a bar to tackle a man moments after he allegedly put a woman into a headlock and pointed a gun at her said he had no idea the suspect was armed.

"In the video, everything looks so slow but in the moment every thing’s moving so fast," said David Ghiloni.

His focus was on helping the woman.

"I was protecting her. I didn’t even know there was a gun involved until I did tackle the guy," he said. 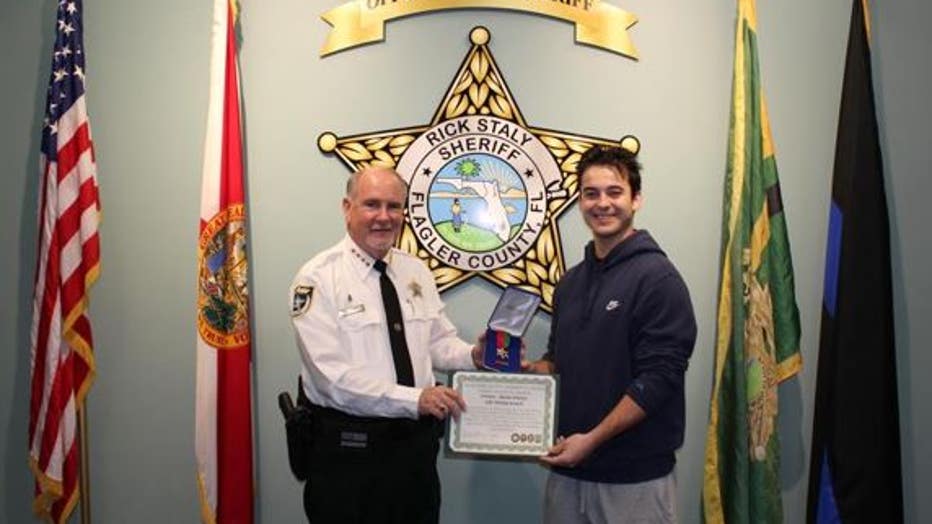 Ghiloni was given a lifesaving award from the Flagler County Sheriff's Office for his actions on the night of Nov. 19 at Smiles Nite Club, where he was working.

"This courageous act…without a doubt saved lives that night," Sheriff Staly said in a prepared statement. "I am honored to be able to recognize David who so selflessly helped those in need and put his own life in harm's way to protect others."

That night while working at Smiles Night Club, a man who was reportedly upset that he could not find his keys allegedly brought a gun into the bar, attacked the woman at the bar and pointed it at her, and then fired at least six rounds as he was being tackled by people at the bar.

Remarkably, no one was seriously hurt.

WARNING: Viewer discretion advised | A Florida man upset that he lost his car keys walked into a Palm Coast bar and pointed a gun at a woman's head and then started shooting at people inside the bar. Deputies said customers ultimately tackled the suspect to the ground.

The suspect, Connor Anderson, is facing several charges, including aggravated assault with a deadly weapon, shooting into a building, and use a firearm under the influence of alcohol, according to online court records.

Ghiloni said he's been overwhelmed with all the attention – from the award from Sheriff Staly to members of the Palm Coast community where the bar is located.

"Being a nobody and then all of a sudden being recognized by the sheriff, the chief, and really the whole palm coast community," he said, adding that he thought he was just doing his job.

"Now that I see the video and I slow it down I can see how bad it could have turned out."