What should go in your hurricane kit?

FOX 26's John Dawson takes a look at some of the gadgets and other items you should have ready, just in case.

The 2022 hurricane season is off to a historic start but for reasons tropical weather experts didn’t believe were possible when hurricane outlooks were released during the spring.

August finished without seeing a named tropical cyclone for only the second time in the modern satellite era, which began in 1967.

Having a La Niña in charge of global patterns makes the occasion even rarer, with meteorologists unable to come up with reliable records that show an August where Atlantic basin activity was shut down during a similar ENSO state.

"The La Niña in the Pacific is very strong. Almost always that means conditions over the Atlantic are conducive for hurricanes. And when we look at the conditions, they are reasonably conducive except for the dry air," said FOX Weather Hurricane Specialist Bryan Norcross.

The current season stands as the only La Niña cycle in modern history to finish the usually active month without any named storms. Seeing no named storms during August has happened around a dozen times but many of the occasions were when development conditions were hostile in the Atlantic during El Niño or neutral events. 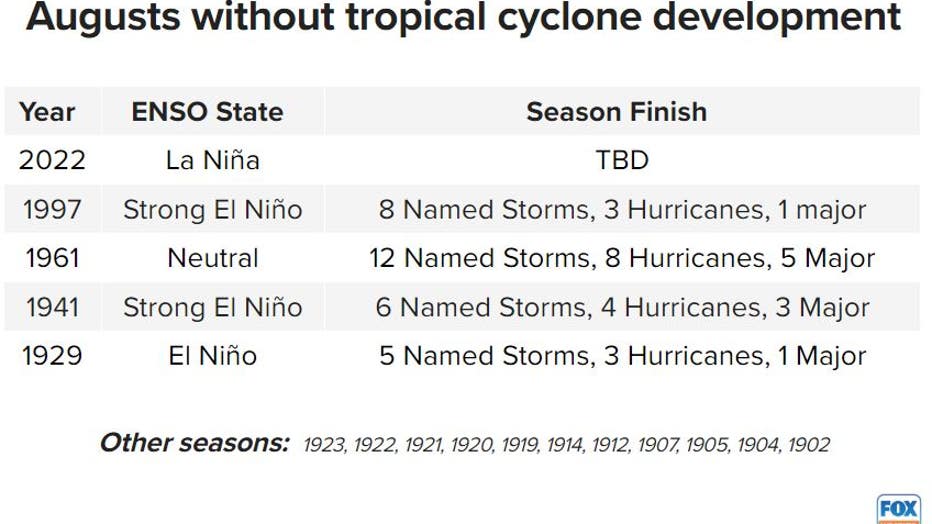 The last time there was a trackable cyclone in the basin was Tropical Storm Colin in July off the coast of South Carolina.

August is usually the second busiest time period out of the eight months that make up the season, with September being the peak of climatological activity.

Usually, by the start of September, six named storms and two hurricanes have already formed, and the basin is on the verge of seeing its first major hurricane with winds of at least 115 mph.

The 2022 season has seen just three named storms, with all being relatively weak and unorganized. 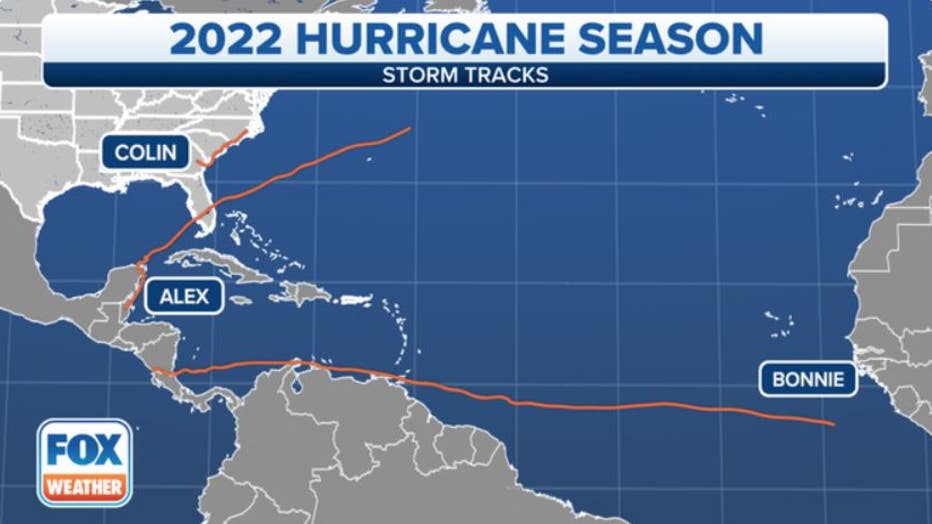 Tropical tracks of Alex, Bonnie and Colin from when systems started out as disturbances. (FOX Weather)

A compilation of expert analysis points to dry air and shear being two of the more prominent issues disturbances encounter in the Atlantic basin.

Deviations in upper-level wind patterns in the central Atlantic, known as a tropical upper-tropospheric trough (TUTT) is the primary suspect that have led to such hostile conditions for tropical cyclones. During active Atlantic hurricane seasons, the TUTT tends to be weaker or even non-existent.

So, why is the TUTT strong this year?

"One reason may be the strong subtropical-tropical sea surface temperature gradient. This strong gradient increases the temperature differential between the subtropics and tropics, which can help increase frontal activity into the tropics, increasing shear and bringing in dry air too," said Dr. Phil Klotzbach, lead forecaster at Colorado State University.

Water temperatures in the North Atlantic are at record warm levels, while waters in the central Atlantic are closer to or slightly below average.

Some experts believe the deviation in temperatures may have created an atmospheric battleground that disturbances had little chance of overcoming and that aided in hostile developmental conditions. 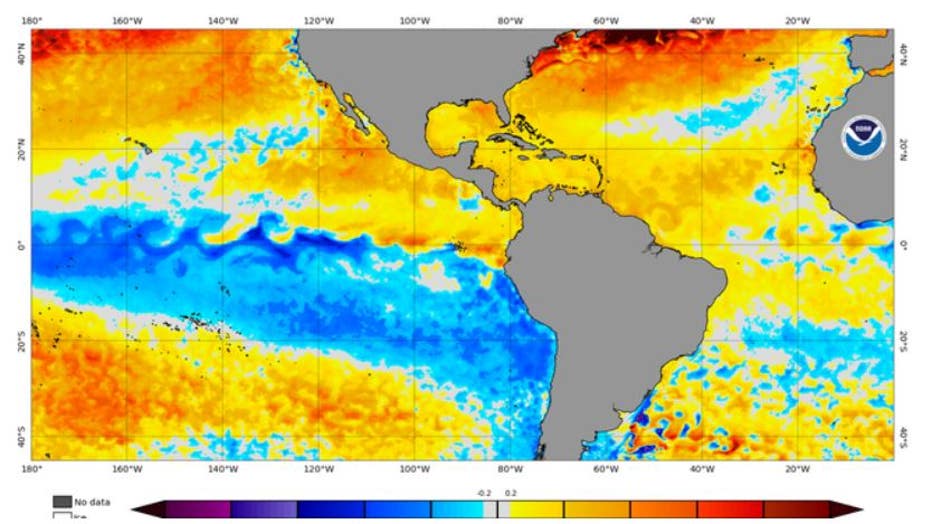 WHICH STATE IS MOST AT RISK FOR HURRICANE DAMAGE IN A GIVEN SEASON? HINT: IT’S NOT FLORIDA

The FOX Forecast Center is monitoring several disturbances across the Atlantic Ocean that have the potential of becoming more organized and strengthen into the elusive fourth named storm of the season.

Experts expect more named storm development in September than during the past couple of months due to the season being in the climatological peak when atmospheric conditions are usually at their prime. 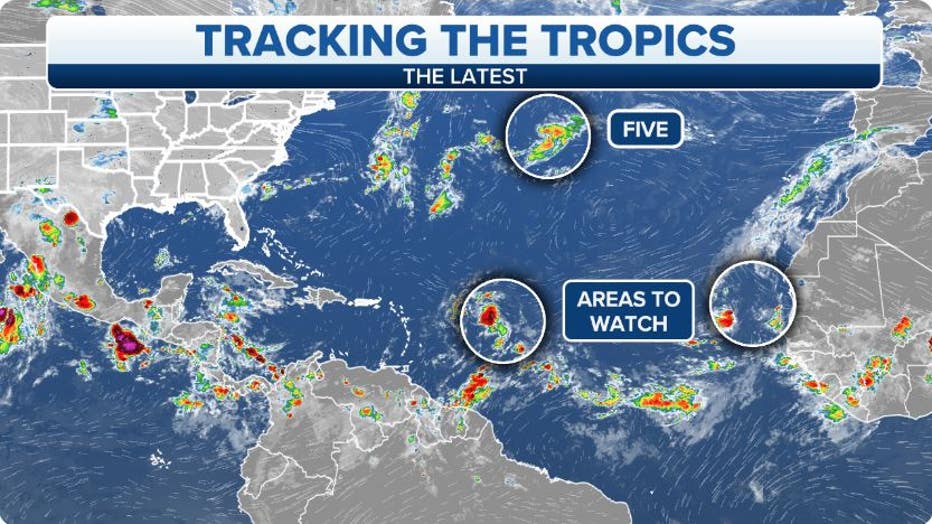 On the current pace of storm development, it looks doubtful that the season will reach the levels predicted by seasonal outlooks.

Colorado State University, the National Oceanic and Atmospheric Administration and other organizations called for an above-average season with around 14-20 named storms and as many as 6-10 hurricanes.

Experts caution not to write off the year entirely given the recent underperformance and that it only takes one massive storm to cause the season to be remembered for generations.

"There is only so much variability that we can explain with perfect knowledge of the large-scale conditions. If we end up getting an above-normal September and October, seasonal forecasts may end up not being that far off," Klotzbach said.

Seasons such as 1989 and 1992 produced limited threats to the U.S., but where hurricanes struck, they left behind catastrophic damage. 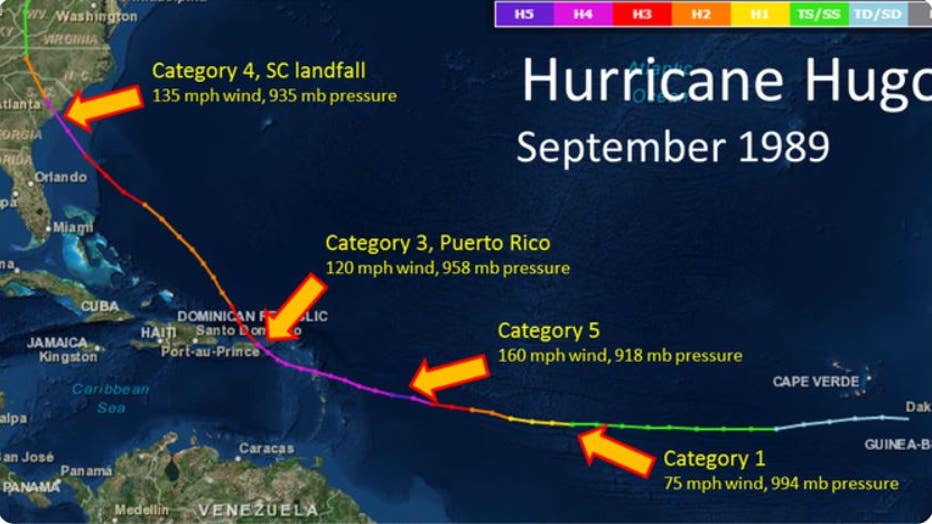 Hurricane Hugo was one of only 11 named storms during the 1989 season. (NOAA)

In September 1989, Hurricane Hugo produced winds of between 135-140 mph which caused billions of dollars in damage in South Carolina. The Category 4 hurricane was only one of 11 named storms during the near-average season.

Similarly, in 1992, Category 5 Hurricane Andrew was one of only seven named storms, but due to its devastation across South Florida, it is fresh on the minds of millions of residents.