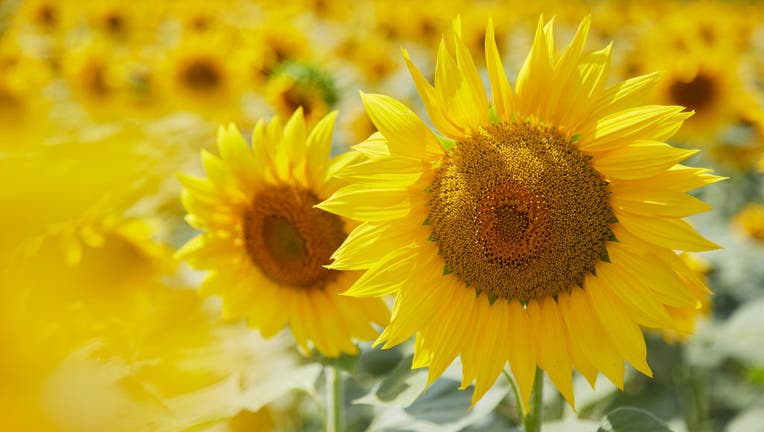 FILE - Sunflowers in the Ukrainian Carpathians on July 28, 2021, in Mukachevo, Ukraine. (Photo by Pierre Crom/Getty Images)

Sunflowers, the national flower of Ukraine, have emerged as a worldwide symbol of solidarity for the country and one of resistance for its people since Russia’s military invasion.

Twitter users have been adding the sunflower emoji to their names. Protesters have been pictured around the world holding sunflowers in support of Ukraine, while London's Russian Embassy was spotted covered in graffiti, signs and sunflower drawings.

A person holds sunflowers and a Ukrainian flag as members of the Ukrainian community protest at Place du Canada in Montreal, Quebec, on Feb. 27, 2022. (Photo by ANDREJ IVANOV/AFP via Getty Images)

The flower seemed to become a more widespread, subtle nod of support for the country after a widely shared video appeared to show a Ukrainian woman berating a heavily-armed Russian soldier. In the video, the woman offers him sunflower seeds to put in his pocket — suggesting that she hoped they would bloom when he died, according to a translation from BBC News.

"Who are you?" the woman asks in the video, after which the soldier tells her to go away.

"You are occupants, you are fascists!" the woman can be heard asking, according to the BBC. "What the f--- are you doing on our land with all these guns? Take these seeds and put them in your pockets, so at least sunflowers will grow when you all lie down here."

A version of the video, posted on Feb. 24 by the news site UkraineWorld, had been viewed over 8 million times. John Oliver even featured the viral video Sunday on his HBO show, "Last Week Tonight."

"Good for her! Good for her!" Oliver said during the episode. "Let's just recognize for a second how ice-cold that insult is. 'Take these seeds and put them in your pocket so sunflowers will grow when you die.' That is f------ brutal. That woman brought seeds to a gunfight and somehow still comfortably won."

U.S. first lady Dr. Jill Biden on Monday wore a face mask embroidered with a sunflower during a White House event. The next day, she wore a sunflower on her sleeve during President Joe Biden’s State of the Union address, of which the first 12 minutes were devoted to Ukraine.

U.S. first lady Jill Biden wears a sunflower mask, the national flower of Ukraine, in support of the Ukrainian people, during an event celebrating Black History Month in the East Room of the White House on Feb. 28, 2022, in Washington, D.C. (Photo by BRENDAN SMIALOWSKI/AFP via Getty Images)

Biden declared that he and all members of Congress, whatever their political differences, are joined "with an unwavering resolve that freedom will always triumph over tyranny." He asked lawmakers crowding the House chamber to stand and salute the Ukrainians as he began his speech. They stood and cheered.

President Joe Biden delivers his first State of the Union address on March 1, 2022.

As he spoke, Russia was continuing its attacks on crowded Ukrainian cities, while a lengthy convoy of Russian tanks and other vehicles advanced slowly toward the capital of Kyiv.

Meanwhile, there were hopes for the resumption of talks between the countries after a Kremlin spokesman said a Russian delegation would be ready by evening to discuss the war with Ukrainian officials.