The next phase of the impeachment inquiry of President Donald Trump moved to the House Judiciary Committee with public hearings featuring professors of law who discussed the constitutional origins of Congress' impeachment power.

The hearing quickly burst into fiery disagreements, as Democrats charged that President Donald Trump must be removed from office for enlisting foreign interference in U.S. elections — while Republicans angrily responded there were no grounds for such drastic action.

The four law professors who testified brought history lessons to the hearing, with talk of American founding fathers and British monarchs, and 20th-century impeachment proceedings of Presidents Richard Nixon and Bill Clinton. Three of them called by Democrats backed impeachment.

"On the basis of the testimony and the evidence before the House, President Trump has committed impeachable high crimes and misdemeanors by corruptly abusing the office of the presidency," said Noah Feldman, a Harvard Law School professor. 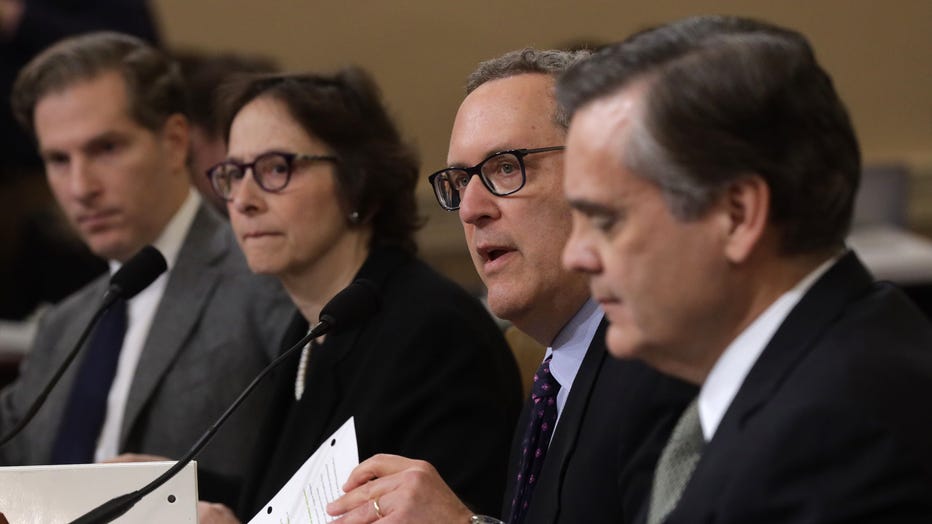 “The very idea that a president might seek the aid of a foreign government in his reelection campaign would have horrified them," Karlan said. “But based on the evidentiary record, that is what President Trump has done.”

RELATED: Impeachment inquiry: Here’s what it means and what happens next

Michael Gerhardt, a University of North Carolina law professor, argued, “If Congress fails to impeach here, then the impeachment process has lost all meaning.”

“If what we're talking about is not impeachable," said Gerhardt, “then nothing is impeachable."

Republican witness Jonathan Turley, a law professor at George Washington University who noted that he didn’t vote for Trump in the previous election, said that the Democrats were bringing a "slipshod impeachment" case against the president, but he didn't excuse the president’s behavior.

“It is not wrong because President Trump is right," Turley said. “A case for impeachment could be made, but it cannot be made on this record."

While there may have been four law professors at the hearing, many of the lawmakers limited their questions to witnesses summoned by their own party — and some asked none at all.

Several GOP lawmakers, bypassing the chance to pose questions to witnesses, used their five-minute allotments with speeches that defended the president and attacked the impeachment proceedings as partisan and rushed.

Republican Rep. Jim Jordan of Ohio praised the testimony of Turley, the GOP-selected witness, but didn't actually direct any questions to him.

Republican Rep. John Ratcliffe of Texas asked a series of questions of Turley but also chose to ignore the three witnesses Democrats relied on to make their impeachment case.

Jordan and Ratcliffe are known to be staunch allies of Trump.

Democrats mostly did the same, focusing their queries to witnesses brought in by their party. Rep. Cedric Richmond, of Louisiana, brought up Turley several times but asked other witnesses — not him — about his testimony. 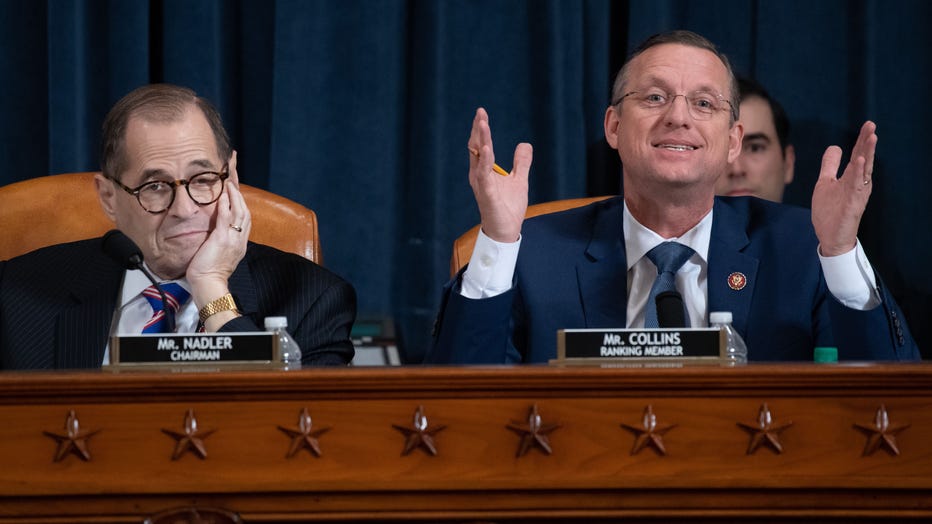 When it was his turn, Rep. Eric Swalwell, a California Democrat, confronted Turley directly on his past statements — and even legal involvement — in prior impeachment proceedings.

The panel responsible for drafting articles of impeachment convened as Trump's team was fanning out across Capitol Hill. Vice President Mike Pence met behind closed doors with House Republicans, and Senate Republicans were to huddle with the White House counsel as GOP lawmakers stand with the president and Democrats charge headlong into what has become a one-party drive to impeach him.

Nadler said Trump's phone call with Ukraine's president on July 25 last year wasn’t the first time Trump sought a foreign power to influence American elections, after Russian interference in 2016, and if left unchecked he could do it again in next year's campaign.

“We cannot wait for the election to address the present crisis,” Nadler said. “The president has shown us his pattern of conduct. If we do not act to hold him in check now, President Trump will almost certainly try again to solicit interference in the election for his personal political gain."

Republicans protested the proceedings as unfair to the president as well as the dredging up of unfounded allegations as part of an effort to undo the 2016 election and remove Trump from office.

“You just don't like the guy,” said Rep. Doug Collins, of Georgia, the top Republican on the panel. He called the proceedings a "disgrace'' and a "'sham."

Several Republicans immediately objected to the process, interjecting procedural questions, and they planned to spend much of the session interrupting, delaying and questioning the rules.

“This is not impeachment, this is a simple railroad job," Collins said.

"Mr. Collins, I would like to say to you, sir, that I read transcripts of every one of the witnesses who appeared in the live hearing because I would not speak about these things without reviewing the facts," Karlan said. "So I'm insulted by the suggestion that as a law professor I don't care about those facts." 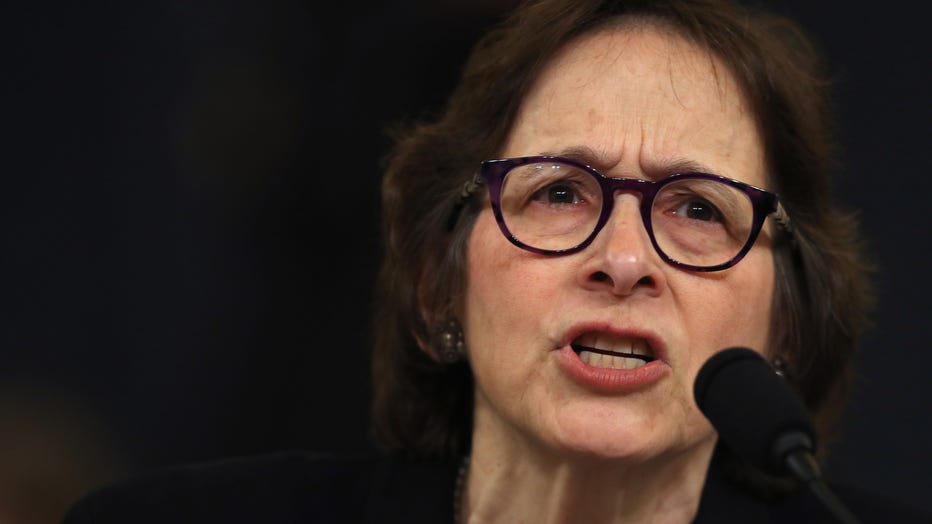 While the committee moved through a contentious hearing, Speaker Nancy Pelosi asked a larger group behind closed doors on Wednesday, “Are you ready?”

The answer was a resounding yes, according to those present — who were unauthorized to discuss it by name and were granted anonymity.

Pelosi has said no decision has been made on whether there will be a House vote on impeaching Trump. But a vote by Christmas appears increasingly likely with the release of a 300-page report by Democrats on the House Intelligence Committee that found “serious misconduct” by the president.

The Judiciary Committee heard Wednesday from legal experts to determine whether Trump's actions stemming from the July 25 phone call with Ukraine's president rose to the constitutional level of “high crimes and misdemeanors," warranting impeachment.

The report laid out evidence that the Democrats say show Trump's efforts to seek foreign intervention in the U.S. election.

New telephone call records released with the report deepen Trump lawyer Rudy Guiliani's involvement in what House investigators called the “scheme” to use the president's office for personal political gain by enlisting a foreign power, Ukraine, to investigate Democrats and Joe Biden, and intervene in the American election process.

The political risks are high for all parties as the House presses only the fourth presidential impeachment inquiry in U.S. history.

In a statement, White House press secretary Stephanie Grisham said, “Chairman Schiff and the Democrats utterly failed to produce any evidence of wrongdoing by President Trump.” She said the report "reads like the ramblings of a basement blogger straining to prove something when there is evidence of nothing.”

Trump, attending a NATO meeting in London, called the impeachment effort by Democrats “unpatriotic” and said he wouldn't be watching Wednesday's hearing.

The "Trump-Ukraine Impeachment Inquiry Report” provides a detailed, stunning, account of a shadow diplomacy run by Giuliani, resulting in layers of allegations that can be distilled into specific acts, like bribery or obstruction, and the more amorphous allegation that Trump abused his power by putting his interests above the nation.

Based on two months of investigation sparked by a still-anonymous government whistleblower's complaint, the report relies heavily on testimony from current and former U.S. officials who defied White House orders not to appear.

The inquiry found that Trump "solicited the interference of a foreign government, Ukraine, to benefit his reelection," Rep. Adam Schiff, the chairman of the Intelligence Committee, wrote in the report's preface. In doing so, the president “sought to undermine the integrity of the U.S. presidential election process, and endangered U.S. national security,” the report said. When Congress began investigating, it added, Trump obstructed the investigation like no other president in history.

Along with revelations from earlier testimony, the report included previously unreleased cell phone records raising fresh questions about Giuliani's interactions with the top Republican on the intelligence panel, Rep. Devin Nunes of California, and the White House. Nunes declined to comment. Schiff said his panel would continue its probe.

Republicans defended the president in a 123-page rebuttal claiming Trump never intended to pressure Ukraine when he asked for a “favor” — investigations of Democrats and Biden. They say the military aid the White House was withholding was not being used as leverage, as Democrats claim — and besides, the $400 million was ultimately released, although only after a congressional outcry. They argue that Democrats just want to undo the 2016 election.

Trump criticized the House for pushing forward with the proceedings while he was overseas, a breach of political decorum that traditionally leaves partisan differences at the water’s edge.

Democrats have also been debating on whether to include an article of obstruction of justice as laid out in the report done by special counsel Robert Mueller.

That report, released in April, laid out potential acts of obstruction but declined to make a determination one way or the other about whether the president had illegally subverted the Russia investigation. Mueller cited Justice Department guidelines that a sitting president cannot be charged with a crime for not making a decision. He left it up for Congress to decide.

During Wednesday's hearing, Nadler signaled that he believed Mueller's findings should be included. In his opening statement, Nadler said Trump took "extraordinary and unprecedented steps" to obstruct the special counsel's investigation.

He added that Trump not only "welcomed foreign interference in the 2016 election" but also "demanded it for the 2020 election."

Democrats could begin drafting articles of impeachment against the president in a matter of days, with a Judiciary Committee vote next week. The full House could vote by Christmas. Then the matter moves to the Senate for a trial in 2020.

The White House declined an invitation to participate Wednesday, with counsel Pat Cipollone denouncing the proceedings as a “baseless and highly partisan inquiry.” Cipollone left open the question of whether White House officials would participate in additional House hearings.

House rules provide the president and his attorneys the right to cross-examine witnesses and review evidence before the committee, but little ability to bring forward witnesses of their own.