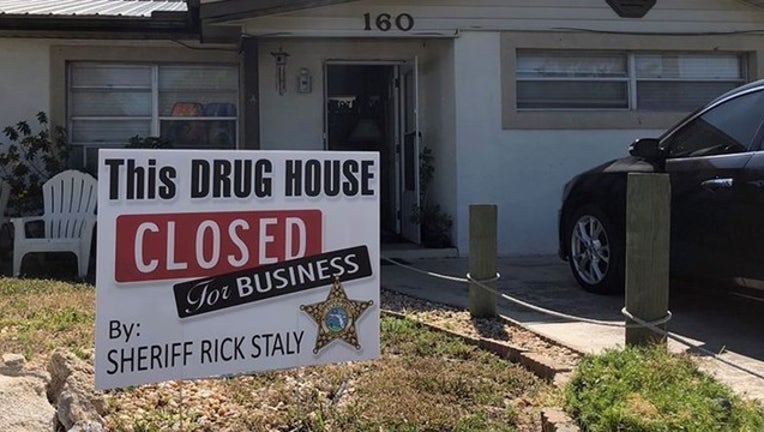 FLAGLER BEACH, Fla. (FOX 35 ORLANDO) - Another drug house has "closed for business," according to the Flagler County Sheriff's Office.

The Flagler County Sheriff's Office said that their Special Investigations Unit, with the assistance of the county's tactical team and the Flagler Beach Police Department, executed a search warrant at 160 Lantana Avenue in Flagler Beach. The warrant was granted due to a thorough investigation into the narcotics dealings of 36-year-old Jamie Bullock, who owns the property.

They said that a search warrant was issued at the same residence in December 2018 after receving numerous tips on the illegal narcotics dealings happening at that address. Bullock was ultimately charged with Possession of Cocaine with Intent to Sell, Tampering with or Destroying Evidence, and Possession of a Controlled Substance. Bullock posted bond and returned to the residence shortly after.

Since December, the Flagler County Sheriff's Office said that narcotics activity has resumed at the residence. Bullock had reportedly began selling cocaine out of the residence.

During May's search, Bullock was found to be in possession of narcotics and was charged with Possession of Cannabis over 20 grams, Possession of a Schedule III Controlled Substance, and Possession of Drug Paraphernalia, the Flagler County Sheriff's Office said. Bullock was arrested and is being held on no bond.

“She had a chance to clean up her act but she went right back to selling poison,” Sheriff Rick Staly said. “Great work by our detectives and the Flagler Beach Police Department for staying on top of this drug house and shutting it down. Thank you to the community members who saw this occurring and reported it."