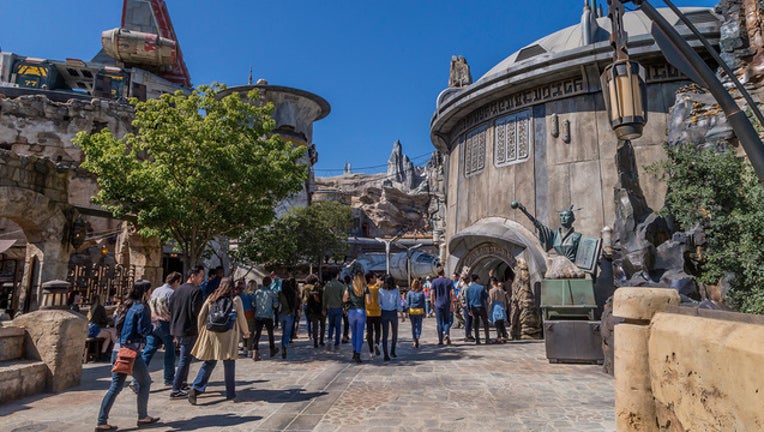 Disneyland's highly-anticipated Star Wars:Galaxy's Edge opens this Friday, May 31, it will make history as the largest, single-themed expansion ever in a Disney park which encompasses more than 14-acres.

Here are some 'hidden gems' guests can look for throughout the new Star Wars-themed land:

While Star Wars:Galaxy’s Edge is set during the current trilogy of Star Wars films, the land features elements representing many different eras of the Star Wars universe.

RELATED: Get a sneak peek of Star Wars: Galaxy's Edge

1) Several creatures seen throughout the land will be familiar to some fans, such as the Dianoga from the Death Star trash compactor in “Star Wars: A New Hope” found in a tank above a Black Spire Outpost drinking fountain, or the taxidermic Wampa from the ice planet Hoth in “Star Wars: The Empire Strikes Back” in DokOndar’s Den of Antiquities.

2) A podracing engine in the Ronto Roasters market stall calls back to “Star Wars: The Phantom Menace,” while the former smelter droid turning the spit of meats is similar to a droid seen in Jabba the Hutt’s palace in “Star Wars: Return of the Jedi.”

3) A mural on the wall of Dok-Ondar’s Den of Antiquities depicts an ancient battle between the light and dark sides of the Force. The original bas-relief of this mural was seen in Chancellor Palpatine’s office in “Star Wars: Revenge of the Sith.”

5) Batuu’s landscape is dotted with tall petrified tree trunks, and Black Spire Outpost takes its name from a trunk in the center of the village that is darker than all the others.

6) Imagineers took rubbings from the feet of the R2-D2 droid used in “Star Wars: A New Hope” and turned those into a set of three-dimensional wheels. Then they built a trolley with those wheels and rolled it through the land before the concrete pathways fully dried to leave behind authentic droid tracks that guests might spot as they explore the outpost.

Have fun in a galaxy far, far away!