A former Orange County deputy accused of trying to perform an exorcism on a child is out of jail. His mother says he needs help and not handcuffs, calling a normally loving father.

ORLANDO, Fla. - The mother of a former Orange County deputy accused of performing an exorcism on his child is speaking out to clear her son's name.

Katherine Blackhurst is the mother of former Orange County deputy Christopher Dougherty, who is accused of warning his children of demons and performing an exorcism on one of them.

She says her son is a loving father who served his community for many years but needs mental help after having a psychotic episode.

According to the arrest affidavit, deputies responded to Dougherty's home on Thursday for a 911 call about child abuse with weapons. 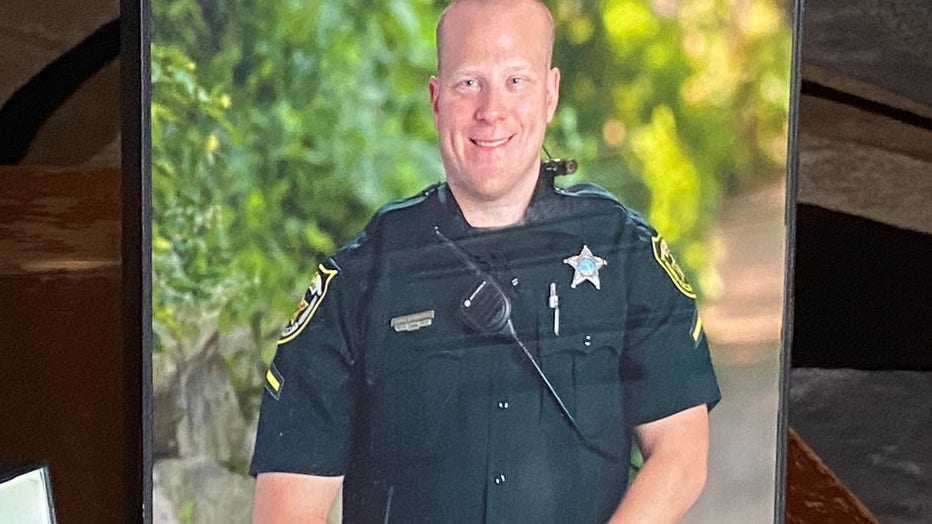 When deputies got there, they say they found Dougherty armed with a gun and a female child on the floor, wearing a kevlar helmet and bulletproof vest, holding a rifle. According to the report, she was "ready to shoot anyone who entered the apartment."

According to the arrest affidavit, the girl told deputies that Dougherty told the children there were demons in the house and they needed to burn the items that were possessed. She told deputies they had burned items in a parking lot drain and Dougherty performed an exorcism on her brother.

"He believed they were all in danger and he asked her to sit on the floor and protect herself. It had nothing to do with him trying to harm her," Blackhurst said. "He felt that these evil spirits were after him and this house and the family."

Blackhurst said that her son hasn't had mental health issues in the past, but in the weeks leading up to the psychotic episode, he was having trouble.

"He had started to have some delusions that were haunting him and the night of the episode, he believed there were demons in the house. He was delusional," Blackhurst said.

The former deputy had been working at the Orange County Sheriff's Office since 2006.

Orange County Sheriff John Mina says he was fired for other reasons, but considering what happened Thursday, they're also concerned about his mental health.

“While this deputy was terminated for a pattern of unsatisfactory performance, these are very serious criminal allegations,” Sheriff John Mina said. “As law enforcement officers, we are held to the highest standards of conduct whether on duty or off duty. But we are also concerned about the deputy’s mental health.”

"I don’t want him to end a 14-year career at the Orange County Sheriff's Office being painted as a villain and not have the respect he deserves," Blackhurst said.