Students said that, for the past few days, there has been nonstop discussion about graffiti that was written on a bathroom wall in Winter Park High School.

WINTER PARK, Fla. - Students said that, for the past few days, there has been nonstop discussion about graffiti that was written on a bathroom wall in Winter Park High School.

"It’s disgusting. It’s surprising. It’s like, wow! This is the school that we live in. This is our environment," said student Sam Bernbaum.

When Bernbaum saw the picture on Instagram Monday, he immediately brought it to the principal’s attention.

The principal later sent several messages to students and parents, including a video message on YouTube.

"We will address the ones who make poor decisions because I’m not going to put up with nonsense."

School officials said the person who wrote on the walls has been identified and will be reprimanded. In the meantime, Bernbaum and other students said they don’t want this to be swept under the rug. 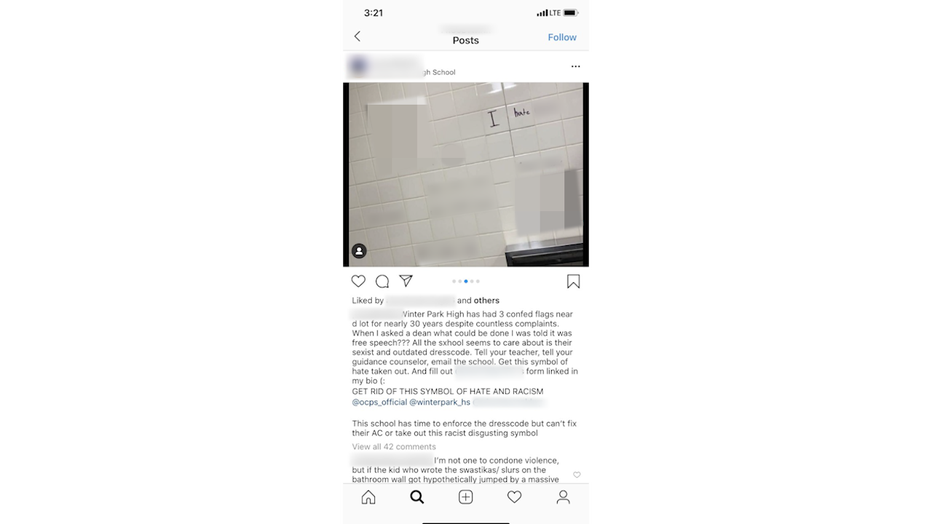 Bernbaum and Lee are now working to put together a week of programming on oppression education, which is something parents agree is desperately needed, especially after hearing the message from the principal.

"It was really minimized. The elephant in the room wasn’t even really addressed. There was nothing about tolerance. Unacceptable hatred," said parent Kimberly Fenton-Zeira.

"There have been a few of you who have made very poor decisions. Yesterday a very bad decision that could lead to expulsion," the principal said in his YouTube address.

"Let’s just call it what it is. This was a hate crime, and if this occurred in a public bathroom anywhere else, the police would be called," said Fenton-Zeira.

The principal sent an email to parents this evening saying he would be meeting with victimized students, but parents say other students need to be educated.

"They’ve completely missed the boat on this and I think as a parent it’s really disheartening to see that."

Administrators said the student could face expulsion for what they did.