On Friday, May 27, Guardians of the Galaxy: Cosmic Rewind – EPCOT's first and much-anticipated roller coaster – will open to the public. FOX 35's David Martin was able to give the ride a test on Thursday.

ORLANDO, Fla. - In the words of Rocket Raccoon: oh yeah!

The highly anticipated Guardians of the Galaxy: Cosmic Rewind roller coaster is officially open at EPCOT in Orlando, Florida. Not only is this the first Walt Disney World ride featuring a Marvel franchise, but it's the very first roller coaster for EPCOT.

If you plan on taking a spin and helping the Guardians save the galaxy, below is your guide to the wildest adventure through time and space!

WHAT YOU CAN EXPECT FROM ‘GUARDIANS OF THE GALAXY: COSMIC REWIND'

The family-friendly roller coaster has been described as a "storycoaster" that rotates 360 degrees as you go on an intergalactic chase to help the Guardians. It also features the first reverse launch on a coaster in Disney history and is one of the longest enclosed coasters in the world.

You’ll get to know the Xandarians, who’ve traveled from their home world to EPCOT to show off their technologies. As you make your way through their world, something goes wrong, and the Guardians of the Galaxy are called in.

Another cool surprise is that Glenn Close reprises her role as Nova Prime, the leader of Xandar and commander of the Nova Corps. You can catch Nova Prime in the new Wonders of Xandar "other-world" pavilion.

Annual passholders who got to preview the ride are raving about it.

"Guardians of the Galaxy: Cosmic Rewind is PHENOMENAL!! I would love to say more but don’t want to spoil it for everyone. If you’re on the fence, go for it! I highly doubt you’ll regret it," Sharlene Sledge wrote on the passholders page on Facebook.

Rider Elizabeth Spears wrote that the ride is extremely smooth and the intensity is similar to the Slinky Dog or Seven Dwarfs Mine Train rides, but "seems more because of the music, like Rockin Rollercoaster."

HOW TO ENTER THE VIRTUAL QUEUE

Starting at 7 a.m. on the day of your EPCOT park reservation, hop onto the "My Disney Experience App" to request to join the virtual queue and to snag a boarding group. You do not need to be at the park to join it. You can join while leaving your house on the way to the park or from your Disney World Resort hotel.

Tip: Get on the screen to join a few minutes before 7 a.m. and refresh a few times. As soon as the time hits 7 a.m., be fast with your fingers to try and get a spot. 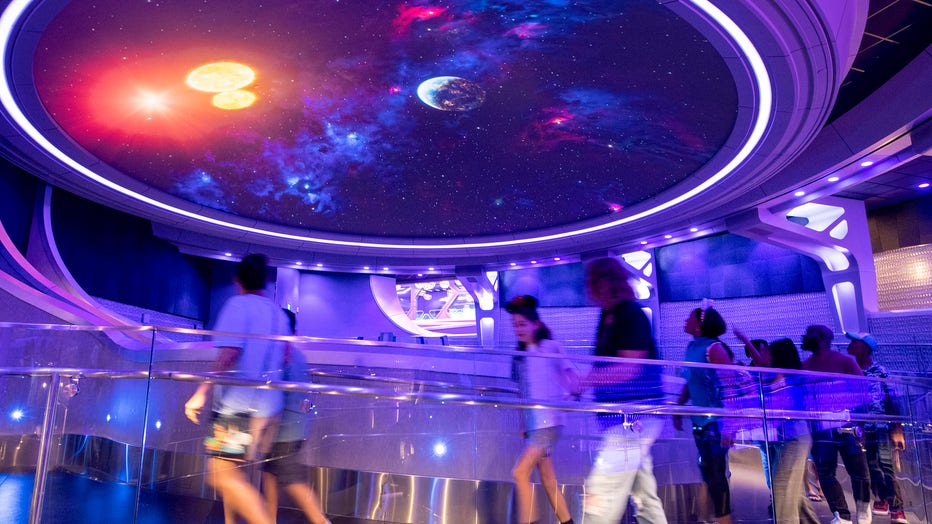 If the 7 a.m. boarding group fills up, you will have another chance at 1 p.m. to join the virtual queue. However, you must be inside the park to try and get a slot during the second opportunity.

Disney reminds guests that joining the virtual queue does not guarantee getting to ride the new coaster. Also, there will not be a traditional standby line.

Guests staying at a Disney Deluxe Resort, Disney Deluxe Villa Resort or other select hotels will get an additional opportunity to request to join the virtual queue at 6 p.m. on select dates during extended evening theme park hours.

If you want to try and use the individual Lightning Lane, you can purchase a pass through the "My Disney Experience App" via the Disney Genie service on the day of your visit. Keep in mind that time slots are anticipated to fill up fast.

HOW TALL DO YOU HAVE TO BE TO RIDE ‘GUARDIANS OF THE GALAXY: COSMIC REWIND?’

The new ‘Guardians’ ride is a family coaster with a height requirement of 42 inches.

DOES THE RIDE GO UPSIDE-DOWN?

WHAT SONGS WILL I HEAR ON THE RIDE?

Your onboard audio will crank hit tunes from the ’70s and ‘80s as you race through the cosmos with your favorite characters from the films.

The ‘Awesome Mix’ playlist of 6 songs for riders to jam to include:

The debut of Guardians of the Galaxy: Cosmic Rewind is part of EPCOT's historic transformation during Walt Disney World's 50th anniversary celebration which is going on now.