The firefighters met with their attorney Rachel Rodriguez in front of the Orange County Administration Building on Sunday to call for the court to grant an emergency injunctive relief against Orange County for what they described as an "unlawful and unconstitutional COVID-19 vaccine requirement policy."

ORANGE COUNTY, Fla. - A group of Orange County firefighters is suing the county over its coronavirus vaccine mandate, which they claim is "unconstitutional."

A status hearing regarding the lawsuit will happen in the next few weeks. The lawsuit was filed earlier this month.

Orange County Mayor Demings initially said that employees who refuse to get the shot could lose their jobs. However, he later made a deal with the firefighters’ union to just issue reprimands.

However, last week, Orange County Fire Rescue (OCFR) Battalion Chief Stephen Davis was fired after officials said that he failed to follow a direct order. His attorney said the decision has to do with the county’s rule to reprimand employees who don’t get the COVID-19 vaccine.

On Sunday, a group of firefighters involved in the lawsuit gathered with their attorney and spoke to the public about their fight against the vaccine mandate.

"I can’t even imagine If I lose my job, or we all lose our jobs, and our dreams came crushing down," Orange County firefighter Jairo Rodriguez expressed. "It just feels like the Mayor isn’t really batting for us right now."

The firefighters met with their attorney Rachel Rodriguez in front of the Orange County Administration Building on Sunday.

"When I found out that Mayor Demings was running for Mayor, being that he was the chief with the police department here, I was very excited," Oscar Negron, another Orange County firefighter, said. "I got nothing but love for Mayor Demings. I respect the man. I have interacted with him many times. I like him. I like talking to him. He’s a cool dude."

However, Negron adds, "this mandate is not the correct way to do it" and that "we're not against the vaccine, we're against the mandate."

Judith Toro, a member of the Orange County Fire Rescue spoke about the testing that unvaccinated firefighters must undergo.

"I have complied with taking these tests on the direct orders of my superiors and I’ve experienced nosebleeds and side effects that have inconvenienced me, take days to resolve, because of these tests," she said. "I have, again, been directed by my direct leadership to continue regardless of injury to take these tests, to comply with the order regardless." 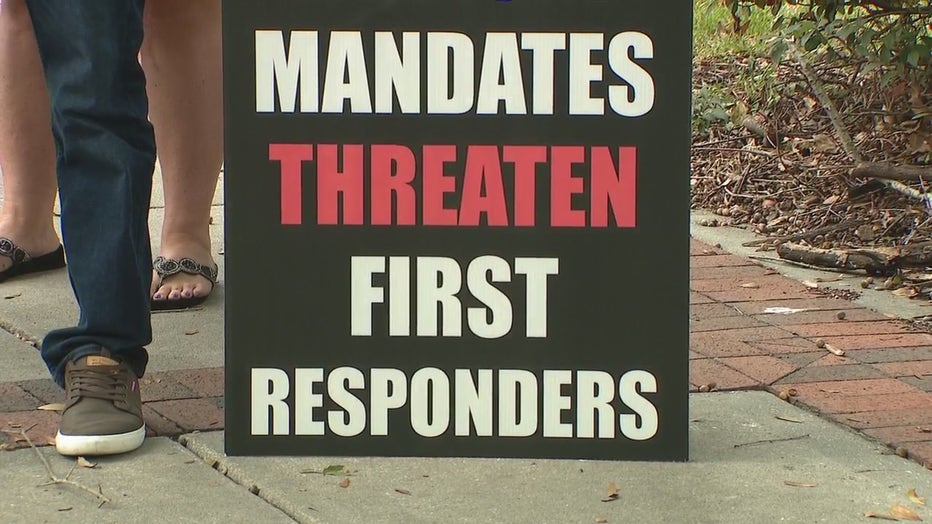 Jason Wheat was the final speaker on Sunday, touching on ‘Operation Freedom of Choice’ and his thoughts on the vaccine mandate.

"Already, it’s caused a great leader to get fired from this organization. That’s already putting the citizens at harm. I would have wanted that chief with me anywhere I go because of his commitment and his leadership with the fire department."