Two men rescued an officer from a burning patrol car. The officer lost control of the unit while pursuing a motorcyclist accused of failing to stop at a red light. (Source: KTXL via FOX Edge)

AUBURN, Calif. - Officers put their lives on the line every day, so Auburn Police Chief Ryan L. Kinnan was especially thankful to learn two bystanders did the same when one of his officers was trapped in a burning patrol car.

Officer Josh Eagan lost control of his vehicle while pursuing a motorcyclist on March 23 in Auburn, California, according to a news release posted on the department’s Facebook page. Eagan’s unit burst into flames after crashing into a retaining wall.

Two men watched him struggle to open his door, so they sprang into action.

"When he opened the door, the officer looked really, really hurt," witness Jacob Estabrook recalled. "The airbag was deployed, he looked pinned in between, dazed and confused." 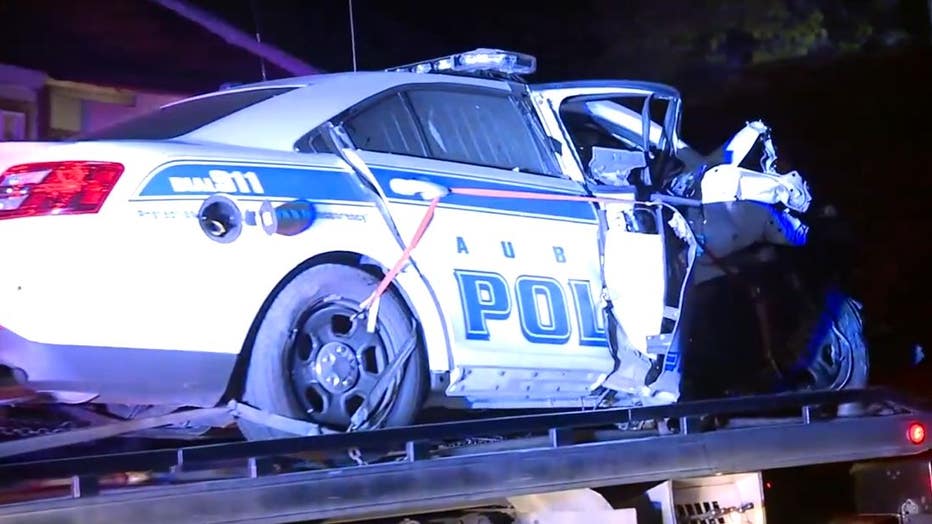 Estabrook said people started to shout that the car was burning. But their screams didn’t stop the men from reaching inside to unfasten Eagan’s seatbelt and drag him to safety.

Other onlookers started searching for a fire extinguisher and were trying to remove any ammunition before the flames reached them.

Firefighters and paramedics arrived shortly after and transported Eagan to a hospital for treatment. On March 25, Lt. Bryan Morrison posted an update saying that Eagan is well on the road to recovery.

Estabrook said instinct compelled him to help Eagan out of the car, doing what he thought anyone would have done in his shoes. Chief Kinnan said he’s "extremely thankful" the two men chose to act and that their actions saved Eagan from being seriously injured or worse.

"Hearing Jacob’s story, if you don’t think this guy is a hero, you’re sadly mistaken for that," Chief Kinnan said. "I mean, the fact that he just told you, he did it because he’s human. He did it because it was the right thing to do."

Authorities later arrested the motorcyclist, identified as 29-year-old Ryan Schlittenhart of Meadow Vista. Police said the chase began when he failed to stop at a red light.

Schlittenhart faces charges for driving under the influence and evading a peace officer.