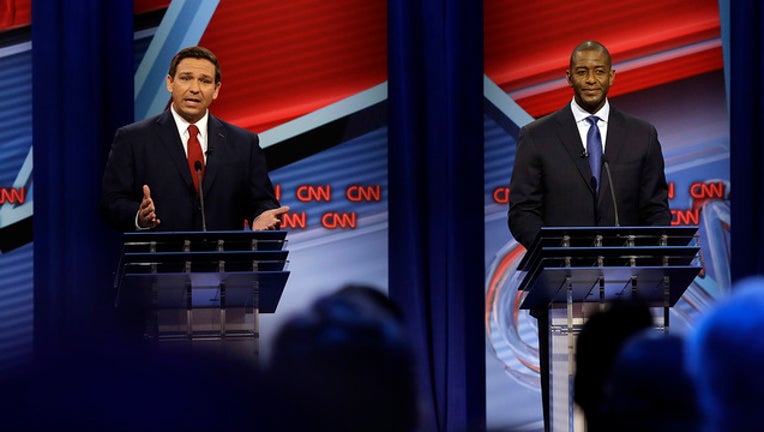 TAMPA (NSF) - Democrat Andrew Gillum and Republican Ron DeSantis shredded each other Sunday night during a nationally televised debate, as the gubernatorial candidates appeared in their first face-to-face showdown little more than two weeks before the Nov. 6 general election.

The hour-long CNN debate in Tampa, hosted by Jake Tapper, is evidence of the attention garnered by the race between Gillum, the Tallahassee mayor who’s trying to make history as Florida’s first black governor and who’s backed by prominent progressives across the country, and DeSantis, a former congressman whose pedigree boasts of a Harvard law degree and a stint as a Navy attorney.

The two men couldn’t be farther apart on the political spectrum, or on their stances on issues, sniping throughout the debate about the environment, health care, and, of course, President Donald Trump, whose support helped boost DeSantis to a GOP primary victory in August.

Tapper questioned DeSantis about his opposition to a sweeping state law, passed after the Feb. 14 mass shooting at Marjory Stoneman Douglas High School in Broward County. The law raised the age from 18 to 21 to purchase all guns and banned the sale of “bump stocks,” devices that can be placed on semi-automatic firearms to make them fire more rapidly.

“The congressman was against the piece of legislation because he’s wholly owned by the NRA,” Gillum said. “He’s not going to stand up to the National Rifle Association. That’s why they’re running all these ads against me, because they want the man that they bought.”

But DeSantis, who resigned from Congress last month to devote his efforts full-time to running to replace outgoing Gov. Rick Scott, countered by raising the issue of Tallahassee’s crime rate, a point he hammered throughout the match-up.

“His record as mayor is one presiding over a city that’s out of control in terms of crime,” DeSantis said, citing a report that found Tallahassee had a historically high murder rate last year.

“All right, well, Ron is being Don. And that’s Donald Trump, neglecting all sense of reason and facts,” Gillum retorted, insisting that Tallahassee is experiencing a five-year low in crime.

Tapper also brought up a tongue-in-cheek television ad that featured the Republican candidate “schooling” his two young children about Trump. The CNN host asked DeSantis if he thinks the president is “a good role model for the children of Florida.”

DeSantis said he and his wife, Casey “were poking a little fun at ourselves” with the ad, then launched into praise of Trump for relocating the American embassy in Israel from Tel Aviv to Jerusalem. Trump followed through on a campaign promise to move the embassy, the former congressman said.

“To me, when you give your word, and you follow through with it as an elected official, that is the model that we’re supposed to do. He was right to move the embassy to Jerusalem,” DeSantis said. “I know Andrew didn’t support that … but to me that was true leadership.”

Gillum gave a more direct answer to the question about Trump being a good role model.

“No, he’s not. Donald Trump is weak. And he performs as all weak people do: They become bullies. And Mr. DeSantis is his acolyte,” Gillum, who was a surprise victor in August’s Democratic primary, defeating four other opponents, including former Congresswoman Gwen Graham.

But DeSantis said his relationship with Trump would help Florida, which relies on federal support for water projects, transportation funding and military installations.

“You need to be able to work with the administration to be able to get the dollars we deserve,” said DeSantis, who repeatedly referred to Gillum as “Andrew” throughout the debate.

“Andrew can’t do that. He wants to impeach Trump. He’s always saying bad things about him. I’m not going to be involved in the Washington food fight anymore. I’ve been there, done that, got the T-shirt. But I think I will be better positioned to advance Florida’s priorities because I have a productive relationship with the administration,” DeSantis said.

But Gillum, who has harshly criticized Trump and has in fact called for the president to be impeached, disagreed.

“This is not Russia. You should not have to kiss the ring of the president of the United States for the president to see to the good will of the third-largest state in all of America. This is a democracy. We can dissent. We can disagree. And when it comes to working together, we can do that, too,” the Democrat said.

To illustrate his point, Gillum said he and Scott, a Republican trying to unseat incumbent U.S. Sen. Bill Nelson, worked together as they dealt with the devastation wreaked by Hurricane Michael, which caused massive damage this month in the Panhandle and the Big Bend region.

DeSantis also hammered Gillum about an FBI probe into public corruption in Tallahassee. Lobbyist Adam Corey, a longtime friend of Gillum with whom the mayor says he has severed ties, appears to be at the center of the investigation. A trip to Costa Rica in which Gillum’s campaign said he paid cash for his portion of a rental house shared with Corey and others, has made the mayor a subject of scrutiny, but Gillum insists he is not the target of the FBI investigation.

“He’s used the office to benefit himself,” DeSantis said.

But Gillum lashed back, accusing DeSantis of spending $145,000 on taxpayer-funded trips before he resigned from Congress and refusing to provide the receipts for the travel.

“I don’t take free trips from anybody. I’m a hardworking person. I know that may not fit your description of what people like me do,” Gillum said.

Tapper also raised the specter of racism, asking DeSantis about a donor “who called Obama the N-word” and about the phrase “monkey this up,” which DeSantis said when referring to Gillum the day after the Aug. 28 primary.

DeSantis pointed to his past work as a prosecutor and said the race of victims was irrelevant.

“Floridians can know that I’ll be a governor for all Floridians. If we disagree tomorrow, maybe two weeks later we’ll find some common ground,” he said.

But Gillum pushed back, saying DeSantis “let us know exactly where he was going to take this race the day after the election” with the “monkey up” comment.

“The truth is I’m black. I’ve been black all my life. So far as I know I will die black,” he said, adding that “the only color people care about is the blue-green algae” and red tide contaminating Florida waterways.

Health care was another flashpoint early in the debate, as DeSantis challenged Gillum over his support for “Medicare for all,” or a single payer health-care system. After Gillum supported the proposal, U.S. Sen. Bernie Sanders, the Vermont progressive leader, endorsed the mayor in the crowded Democratic primary.

DeSantis said the Medicare proposal would fold funding for existing programs --- such as the military’s TRICARE, Medicaid and Medicare --- into a new program.

"It dumps all those people against their will, regardless of if they want to stay in their current plans, it dumps on a single-payer government system,”’ DeSantis said. “Taxes will go through the roof.”

Gillum did not directly address the criticism, saying instead that he supports expanding Medicaid eligibility and that DeSantis repeatedly voted to repeal the Affordable Care Act while in Congress. The federal health-care law encourages states to expand Medicaid and requires insurers to cover people even if they have pre-existing conditions prior to obtaining coverage.