Meal for first responders picked up by Philly residents

From Philly with love, cheese steaks are being delivered to first responders in Central Florida.

ORLANDO, Fla. - Cavos Bar and Kitchen has been keeping busy during this pandemic.

Many of its meals are being donated and delivered to first responders right now.

Cavallini’s childhood friends and family back home near Philadelphia are picking up those tabs.

That crew is now calling themselves the “Delco Connection” and explaining how this started two weeks ago without Mark knowing.

“We were on Facetime and he was upset about maybe having to close his doors and immediately we just started texting each other. We can’t let that happen,” said Andria Rafferty. 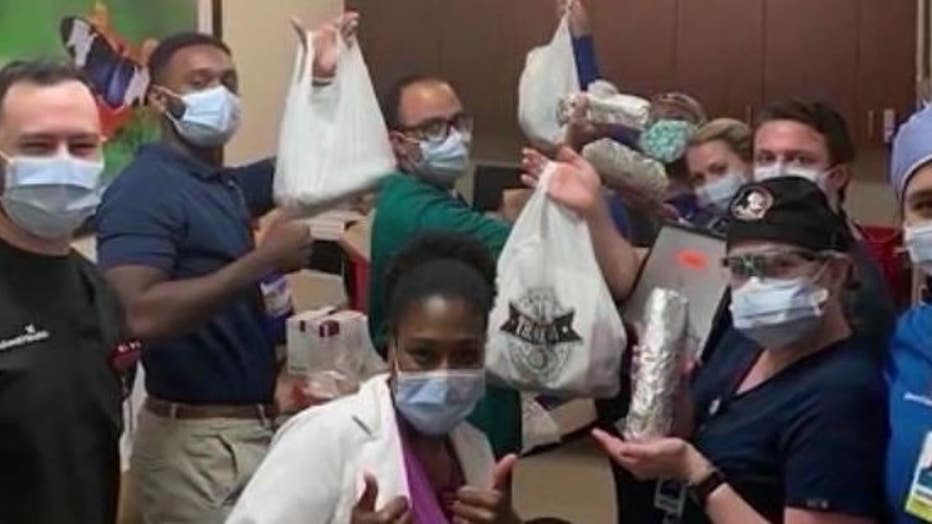 Cavo’s is a brand new restaurant.

Cavallini, his brother and a friend had their soft opening at the end of November, but the restaurant didn’t open up full-time for lunch and dinner until January 1.

“Everyone’s got to eat, so it just makes sense now that he’d play a big part in trying to feed Orlando’s first responders,” said Lauren Hershaff.

Rafferty, Hershaff and their husbands started hitting up family and friends for donations and collected nearly $5,000 in a week to buy meals from Cavo’s to donate to first responders on the job.

“I told him, this is not a donation or handout for you. It will help your business and first responders down there. So, we thought it was a win-win to help keep his business afloat during these tough times,” Francis Hershaff said.

This all came as quite a surprise to Cavallini when they told him what they’d been up to.

“I cried more than I’d like to admit, that’s for sure. But that’s how the people where I come from are. You take care of your family and your neighborhood no matter where they are,” Cavallini said.

The folks in Delaware County, Pennsylvania are happy to be able to help keep their best friend’s dream alive and his brand new business open.

“We’re going to keep fighting for him to survive this virus,” Andria Rafferty said.

They're glad they can do that by feeding first responders from 865 miles away.