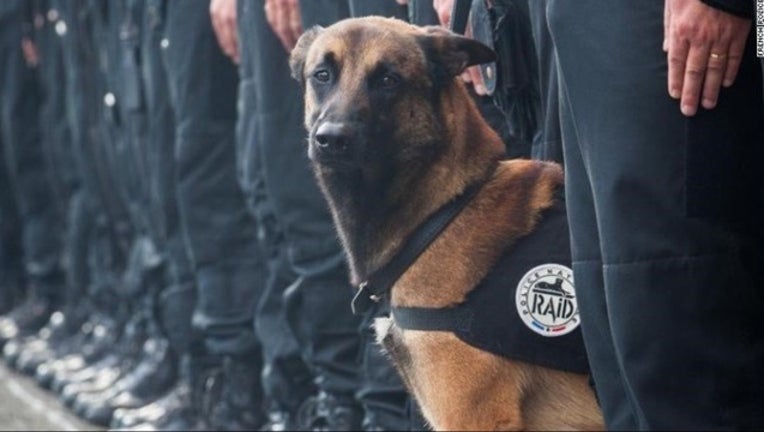 PARIS (AP) - A French police dog named Diesel, killed in a raid targeting the alleged mastermind of the Paris attacks and another cell of extremists, is being honored as a hero all over the world.

Many have turned to social media to pay tribute to the 7-year-old Belgian shepherd dog that France's National Police said was "killed by terrorists" early Wednesday during the raid in Saint-Denis, north of Paris.

Police shared a picture of the SWAT team member on Twitter, saying assault dogs were indispensable to their work.

Within hours, #JeSuisChien — inspired by the popular slogan "Je Suis Charlie," used worldwide in solidarity after the Charlie Hebdo attacks earlier this year — had gone viral.

Many shared messages praising Diesel's bravery and loyalty, while some users posted pictures of their own dogs in solidarity.

At least two people were killed in the seven-hour siege of an apartment building in the Parisian suburbs earlier Wednesday. Several police officers were slightly injured in the operation. The fate of the suspected mastermind of last Friday's attacks, 27-year-old Abdelhamid Abaaoud, wasn't yet clear.