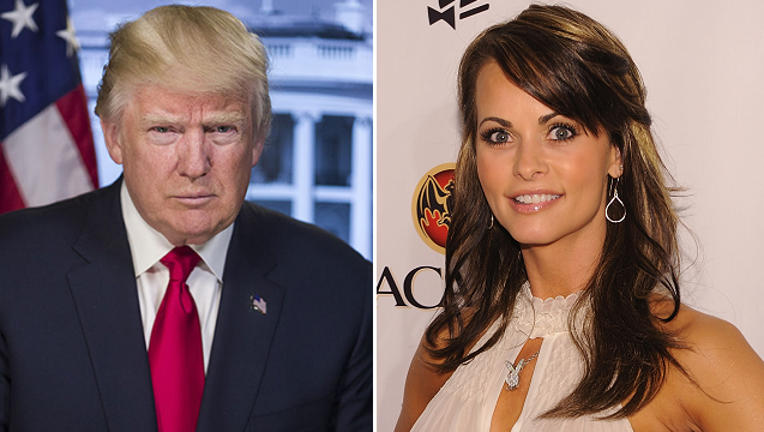 President Trump had a nine-month affair with former Playboy Playmate Karen McDougal, according to her eight-page, handwritten account of the relationship obtained by The New Yorker. (McDougal photo by Dimitrios Kambouris/Getty Images for Playboy)

LOS ANGELES (AP) -- A former Playboy model apologized to first lady Melania Trump for a 10-month affair she claims she had with President Donald Trump that started with him offering her money after the first time they had sex.

During an interview with CNN's Anderson Cooper that aired Thursday night, Karen McDougal said Trump tried to pay her after their first sexual tryst at a bungalow at the Beverly Hills Hotel in 2006.

"Well, after we had been intimate, he, he tried to pay me. And I actually didn't know how to take that," she said. "But I looked at him and I said, `That's not me. I'm not that kind of girl."'

She cried on the way home and didn't think she would see him again, but agreed to go on other dates with him after he called her back, she said. McDougal repeatedly described Trump as "very charming" and "sweet."

McDougal said she continued the relationship with Trump for about 10 months and broke it off in April 2007 because she felt guilty. She recalled traveling to meet Trump at his properties in New York, New Jersey and California and said she had sex with him "many dozens of times."

McDougal had feelings for Trump, but the affair was "just tearing me apart," she said.

Speaking to CNN -- which her attorney has said would be her only interview about the relationship -- McDougal apologized when she was asked what she would say to Melania Trump.

McDougal said she never wanted to discuss her relationship and repeatedly rebuffed inquiries from reporters about the alleged affair. But after the story became public, she wanted to get out and tell her side of what happened, she said.

The White House has said Trump denies having an affair with McDougal and did not immediately respond to a request for comment about the interview Thursday night.

On Tuesday, she filed a lawsuit in Los Angeles against the company that owns the supermarket tabloid National Enquirer, which she said paid her $150,000 during the presidential campaign for the rights to her story of an affair, but never ran the story.

McDougal's lawsuit, which asks a judge to invalidate the contract, alleges that Trump's attorney, Michael Cohen, was secretly involved in her discussions with the tabloid's parent company, American Media, Inc.

The company has said that McDougal has been allowed to speak about her relationship since 2016 and the contract gave them discretion over whether to publish the story.