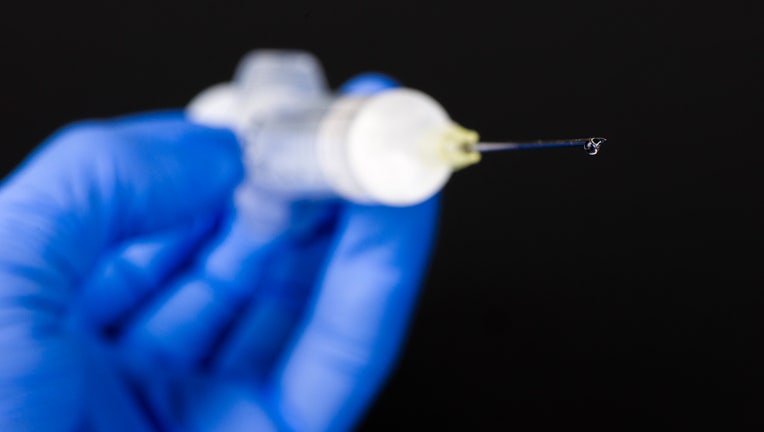 FILE - A hand in a blue medical glove is holding a syringe with a hypodermic needle. (Photo by Frank Bienewald/LightRocket via Getty Images)

TALLAHASSEE, Fla. - In what at times appeared more like a tent revival than an agency rule hearing, state health officials on Friday received public input on a proposal that would deny Medicaid coverage for treatments such as puberty-blocking medication and hormone therapy for transgender people.

The state Agency for Health Care Administration rolled out the proposed rule in June, drawing harsh criticism from national and state legal and LGBTQ-advocacy groups.

Friday’s meeting drew more than 150 people, with supporters of the proposed rule --- many of them sporting "Let Kids Be Kids" decals and making biblical references --- vastly outnumbering opponents.

Speakers supporting the proposal included a Baptist minister, members of the Florida Citizens Alliance, the head of the Christian Family Coalition, the founder of the Florida Prayer Network, a representative of the Florida Federation of Republican Women, and a man carrying a giant American flag on a pole.

In contrast to typically staid rule hearings, the crowd at Friday’s session frequently broke out in applause and more than once attempted to shout down opponents of the proposal.

The proposed rule centers on treatment for gender dysphoria, which the federal government defines as clinically "significant distress that a person may feel when sex or gender assigned at birth is not the same as their identity."

Under the proposed rule, the Medicaid program would not cover puberty-blocking medication, hormones, and hormone "antagonists," sex-reassignment surgeries, and any "other procedures that alter primary or secondary sexual characteristics."

The proposal also would establish that such treatments don’t meet a definition of "medical necessity." That is important because, by law, services provided in the Medicaid program must be deemed medically necessary.

The agency, which oversees the state’s Medicaid program, issued a report last month to back denying coverage of the treatments, which it said were "not consistent with generally accepted professional medical standards and are experimental and investigational."

Friday’s hearing opened with testimony from Chloe Cole, who said she is a 17-year-old "de-transitioner" from California who underwent treatments, including surgery to remove her breasts, between the ages of 13 and 16. Cole said she supports the proposed rule.

"I was unknowingly cutting off my true self from my body," she said, adding that she "wasn’t capable of understanding" the decisions being made at the time.

Jeannette Cooper, a co-founder of Parents for Ethical Care, applauded the proposed rule, saying children are "being met with a medical treatment for a psychological condition."

Such treatments are "causing permanent psychological and physical harm by solidifying an idea that maybe you were born in the wrong body," Cooper argued.

"We are here to state the obvious. No child can or ever will be born in the wrong body. Everybody knows what a woman is, but some people are afraid to say it. We are not afraid," she said. "Affirmation (gender-affirming care) is a poison bandage that does not help to heal."

But Nathan Bruemmer, an attorney who works as LGBTQ advocate for state Agriculture Commissioner Nikki Fried, said that "gender-affirming care is the standard of care," noting that numerous medical associations support treatment for gender dysphoria.

"I am one of thousands, tens of thousands, of transgender Floridians here in our state who had the privilege to have access to gender-affirming health care … who are happy and successful and thriving," Bruemmer said. "We are part of the fabric of this nation and this great state and we deserve the rights afforded to all."

"Groomers are using their authority as adults to pressure children and ruining their lives," he said. "Let kids be kids."

But critics of the proposal warned that it could have deadly effects on transgender Floridians and is based on politics rather than policy.

"The rule is simply discriminatory, undeniably targets the transgender community. You may not understand what it’s like to be transgender … but transgender friends are here in this audience, and they are telling you about how horrible this will be for the more than 9,000 transgender Floridians on Medicaid," said Jon Harris Maurer, public policy director for the LGBTQ-advocacy group Equality Florida, whose comments were drowned out by jeers.

Rule supporter Pam Olsen, founder of the Florida Prayer Network, said the state needs to "stop the nonsense, and let’s do what’s right."

Ed Wilson was among numerous speakers who alleged that children are being indoctrinated into believing they are transgender.

"Taxpayer money should never be used to destroy lives," he said.

Lambda Legal attorney Carl Charles, however, said his organization is "deeply disturbed" by the proposed rule and disputed the state report backing it.

Treatments targeted in the proposal are "clinically effective, evidence-based and widely accepted and used by medical professionals across the country for treating gender dysphoria," Charles said.

The proposal "will cause serious, immediate and irreparable harm to transgender Medicaid participants in Florida who have already experienced … well-documented and pervasive stigma and discrimination in their day-to-day lives, including significant challenges, if not all-out barriers, to accessing competent home-care services," he argued.

The proposed rule comes as the DeSantis administration and Republican leaders target transgender issues in advance of the 2022 elections.

The Florida Department of Health in April released guidelines that said treatment such as puberty-blocking medication and hormone therapy should not be used for transgender youths. Federal officials have blasted the state’s stance.

At the close of Friday’s two-hour meeting, Jason Weida, assistant deputy secretary of Medicaid policy and quality for the Agency for Health Care Administration, said the proposal does not apply to private insurers or people who pay for treatment on their own.

"We’re not talking about a ban for treatment of gender dysphoria. We’re talking about not covering through reimbursement in the Florida Medicaid program for the services that are inherently enumerated in the rule itself," Weida said.