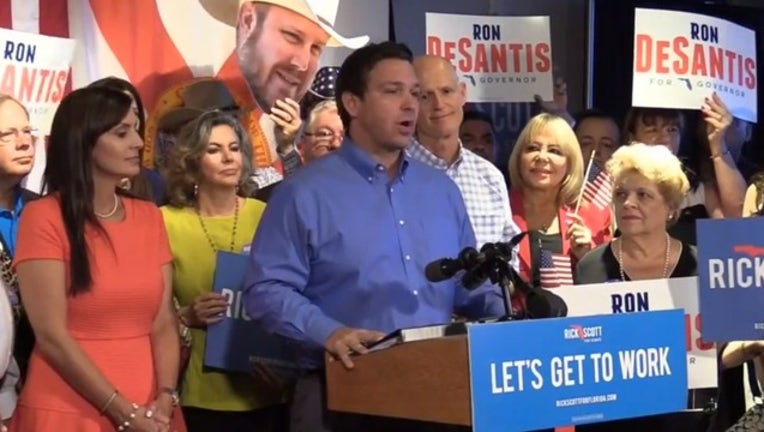 TALLAHASSEE, Fla. (AP) - When Ron DeSantis becomes Florida's next governor, he will continue a two-decade tradition of Republican control that has emphasized tax cuts, the growth of school voucher programs, and a deep skepticism about expanding the state's health care safety net.

But DeSantis, who defeated Tallahassee Mayor Andrew Gillum after a harsh and negative campaign, is not expected to be a carbon copy of past GOP governors when he assumes office Tuesday. Just 40 years old, DeSantis is the youngest governor in decades and the first to live at the mansion with young children in a half-century.

In an interview, he said he is eager to jump into a job that he contends will have more impact than what he tried to do in Washington as a Republican congressman from northeast Florida.

After the inauguration events are over, he plans to act swiftly on everything from pending appointments to Florida's Supreme Court to deciding the fate of the sheriff whose deputies were assigned to protect the school where 17 died in a February massacre.

"The pomp and circumstance is fine, but ultimately this is about putting the pedal to the metal," DeSantis said. "So I'll be raring to go on day one."

DeSantis, who succeeds Gov. Rick Scott, will get a chance to remake the seven-member Supreme Court as three left-leaning justices will be required by law to retire this week. He said he'll announce his first selection Wednesday with the other two coming in the next two weeks. DeSantis said he has already interviewed all 11 finalists selected by a state nominating commission.

DeSantis also said he'll render a decision soon on whether to suspend Broward County Sheriff Scott Israel. Israel has been criticized for the performance of his deputies during the shooting at Marjory Stoneman Douglas High School.

During the campaign, DeSantis originally said he would suspend Israel, but then backed off slightly, saying he would hold officeholders accountable. Scott had refused to suspend the sheriff, saying he wanted to wait until investigations were complete before deciding.

DeSantis also said he will roll out environmental plans later this week as well. During the campaign, DeSantis criticized Florida's powerful sugar companies and vowed to push ahead with actions that would stop the algae outbreaks that have plagued both coasts and have been tied to discharges from Lake Okeechobee.

DeSantis was not a major political figure in the state until the endorsement of President Donald Trump paved the way for DeSantis to crush Agriculture Commissioner Adam Putnam in the GOP primary. He defeated Gillum after a campaign that featured accusations of corruption and racism - and very little in the form of substantive policy debates.

His official victory was delayed by a mandatory recount following the close election. In the weeks since then, he has put together the building blocks of a new administration, tapping several legislators and even some lobbyists to fill agency posts.

In some of the moves, the new governor turned to people who did not support him in the election. He tapped Democratic State Rep. Jared Moskowitz, vice president and general counsel at a well-known disaster recovery company to head the state's emergency management division. And he successfully pushed for former House Speaker Richard Corcoran to become the state's next education commissioner even though Corcoran, a fellow Republican, took shots at DeSantis during the primary.

"It looks like the House has taken over the governor's mansion," quipped State Sen. Oscar Braynon, a Miami Democrat.

Braynon, citing his comments on the campaign trail, said he expects DeSantis to support ideas championed by conservative Republicans.

"I'd love to be surprised and find that DeSantis has a mind of his own and has some interesting ideas that transcend partisan politics, but I doubt it," said Braynon.