A woman in Florida recently filmed her encounter with a raccoon that managed to climb inside her Christmas tree.

TALLAHASSEE, Fla. - Finding a raccoon inside your Christmas tree isn’t quite as ridiculous as finding an owl or koala bear, but we can all agree it’s still pretty terrifying.

A Florida woman recently encountered a raccoon that found its way into her Christmas tree – and she filmed the entire chaotic ordeal that ensued afterward!

In a video posted to Facebook, Tallahassee resident Aubrey Iacobelli initially thought a cat had crawled through her doggy door and settled in her tree on Thursday at approximately 4 a.m.

"C’mon, get out of my tree," she can be heard telling the "cat," which was nestled toward the back, obscured by several branches. "I swear if you knock down any of my glass ornaments, cat!"

"Is it a cat? No, it’s not a cat. What is that?" she asks after catching a better glimpse of the furry critter, which she thinks might be a squirrel. "God, you guys, I’m afraid," she tells the camera. 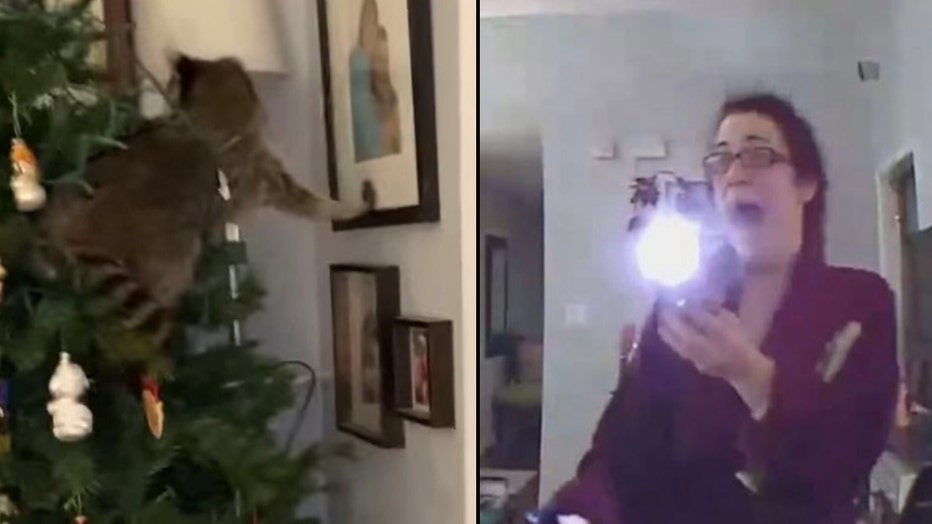 That’s when she decided to unleash her dog, at which point the raccoon ascends even further, and Iacobelli gets a much clearer view of what she’s up against.

For the next few moments, Iacobelli’s terrified laughter is heard as her dog wrestles the raccoon to the ground – taking the Christmas tree down with it.

But the raccoon wasn’t ready to leave. Instead of making a break for the door, the critter scrambles to the dining room where is eventually starts swinging from the overhead light fixture like a circus act!

Around 5:15 a.m., Iacobelli began swatting at the raccoon with a broom hoping that would scare it toward the front door. It worked – and the raccoon made its way back outside.

Iacobelli says her dog suffered some minor scratches but both animals are ok.

"And that was my Thursday morning," Iacobelli explained in an update filmed later that day. She added that her veterinarian thought the whole thing was "hilarious" too.

"Now that [I’m] not right there in the moment, it does seem kind of funny," she admitted. "It’s probably going to get funnier the further away from it I get."