State lawmakers are in a special legislative session debating the fate of independent special districts, such as the Reedy Creek Improvement District, that effectively allows Walt Disney World to self-govern itself.

The Senate quickly passed the bills after DeSantis on Tuesday added them to a special legislative session about congressional redistricting. The House is expected to give final approval to the measures Thursday.

The governor’s feud with Disney erupted after the company issued a statement saying the controversial education measure, dubbed by critics as the "don’t say gay" bill, "should never have passed" and that DeSantis shouldn’t have signed it.

Republican legislators have lined up behind DeSantis in the fight against Disney, which employs more than 77,000 workers in Florida and is a tourism anchor for the state. 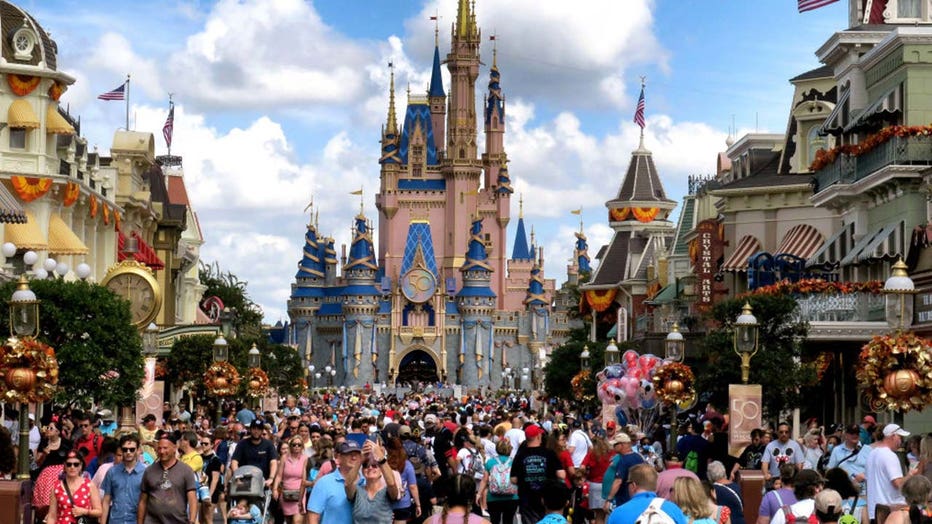 FILE - Crowds fill Main Street USA in front of Cinderella Castle at the Magic Kingdom on the 50th anniversary of Walt Disney World.

One of the bills targeting Disney would eliminate a decades-old special district that gives the entertainment company self-governing powers on its Central Florida property.

The Reedy Creek Improvement District, created in 1967, covers roughly 25,000 acres in Orange and Osceola counties and oversees issues such as land use and traditional functions of local government such as fire protection and water and wastewater service.

The Senate approved the measure (SB 4-C) in a 23-16 vote on Wednesday, with Jeff Brandes of St. Petersburg the sole Republican to join Democrats in opposition.

The proposal would lead to the elimination in June 2023 of the Reedy Creek Improvement District and five other special districts across the state: the Bradford County Development Authority, the Sunshine Water Control District in Broward County, the Eastpoint Water and Sewer District in Franklin County, the Hamilton County Development Authority and the Marion County Law Library.

The districts would be able to seek to be re-established by the Legislature before June 2023. But if it is dissolved, the Reedy Creek district’s debt obligations, revenues and responsibilities would be transferred to Osceola and Orange counties and the small cities of Lake Buena Vista and Bay Lake.

Senate Democrats argued Wednesday that the district carries more than $1 billion in debt, which would be piled on taxpayers. They also castigated DeSantis for what they said was retaliation against the company for daring to defy him on the education issue.

"This bill is punitive punishment for political statements Disney has made opposing divisive policies supported by this governor. This bill is a knee-jerk reaction and a political stunt that is shortsighted and not well thought out," Sen. Victor Torres, an Orlando Democrat whose district includes the Disney attractions, said.

Sen. Janet Cruz, D-Tampa, argued that businesses such as Disney should be allowed to express their beliefs without fear of retribution.

But speaking to reporters after the vote, Senate President Wilton Simpson blamed Disney for the legislation "by bringing attention onto themselves."

He noted that the Reedy Creek district has eminent-domain power, the potential ability to build a nuclear-power plant, "and they have many other powers that I do not believe that the public would approve of, if we were doing this today and not in 1967."

"Once we started opening up Reedy Creek and seeing what all was inside of it, it was determined by this Legislature that we needed to take action," Simpson, R-Trilby, said. "Anytime one of our large corporations, with special opportunities in this state, shine more light on themselves than maybe they wish that they had have, we then as a Legislature will take a look at what is actually in this document (Reedy Creek paperwork)."

While Simpson and other GOP lawmakers disputed that the legislation was meant to punish Disney, the governor, who is running for re-election this year and is widely considered a potential 2024 presidential candidate, was clear about his intentions.

DeSantis’ campaign boasted about his clash with the company in a fundraising email Wednesday, saying he told the Legislature to "eliminate Disney’s sweetheart deal" with the special district.

"If Disney wants to pick a fight, they chose the wrong guy," DeSantis said in the message. "Disney has gotten away with special deals from the state of Florida for way too long. It took a look under the hood to see what Disney has become to truly understand their inappropriate influence."

The Senate on Wednesday also approved a measure (SB 6-C) that would eliminate an exception for theme parks tucked into a 2021 law that targeted social media platforms such as Twitter and Facebook. The law seeks to punish tech companies that strip users from platforms or flag users’ posts. A federal judge last year issued a preliminary injunction blocking the law from being enforced, saying it was "riddled with imprecision and ambiguity."

Sen. Gary Farmer, D-Lighthouse Point, blasted doing away with the theme-park exception in the law.

"Punitive, petulant, political payback. It’s not how you’re supposed to govern," he said.

But Sen. Jennifer Bradley, a Fleming Island Republican who sponsored the Disney-related bills, urged her colleagues to eliminate the theme park exemption.

"I have a hard time understanding why that would be a controversial issue. Let’s apply the law equally to everyone," she said.