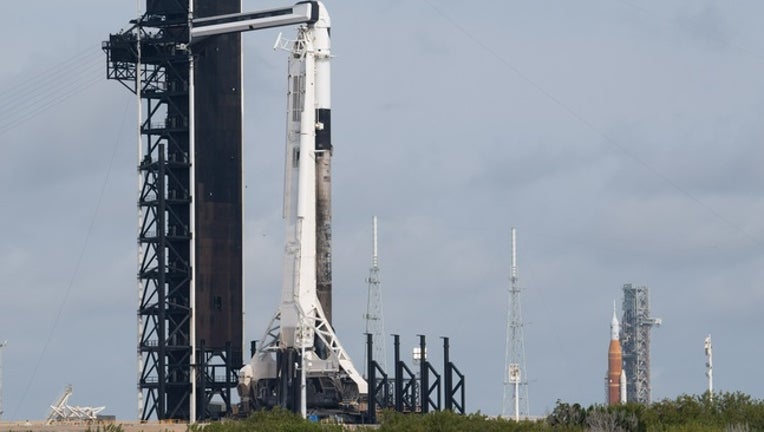 A SpaceX Falcon 9 carrying the Axiom Space Ax-1 mission is in the foreground on Pad 39A at Kennedy Space Center as NASA's Artemis I rocket sits on nearby Pad 39B for tests.

Here is what you need to know about each.

The crew was supposed to spend eight days aboard the ISS, but due to poor weather conditions, their return to Earth was delayed. The crew undocked from the ISS the evening of Sunday, April 24, and successfully landed in the ocean off the coast of Jacksonville, Florida, on Monday, April 25 shortly after 1 p.m.

Watch: AX-1 mission splashes down in ocean after visit to ISS

Axiom Space's Ax-1 Mission successfully landed in the ocean outside of Jacksonville, Florida, after several days at the International Space Station. The launch marked the first-ever all-private mission to the ISS. There were four astronauts aboard.

NASA's SpaceX Crew-4 mission is scheduled to launch from Kennedy Space Center on Wednesday, April 27, at 3:52 a.m. An additional launch opportunity is set for Thursday, April 28, 2022.

The four astronauts that will be onboard the Falcon 9 rocket are Kjell Lindgren, Bob Hines, Samantha Cristoforetti, and Jessica Watkins.

According to SpaceX's website, all four astronauts will "conduct over 200 science experiments in areas such as materials science, health technologies, and plant science to prepare for human exploration beyond low-Earth orbit and benefit life on Earth." It will be the Dragon rocket's first flight supporting the mission and the fourth flight for Falcon 9's first stage booster, according to SpaceX.

United Launch Alliance will launch the Boeing Starliner spacecraft on a second uncrewed test flight, according to Kennedy Space Center's website. The test launch is scheduled for May 19, 2022, and is a rescheduled flight from 2021.

This will be an uncrewed test flight. The Orion spacecraft will travel thousands of miles – beyond the moon – over the span of three weeks, according to the website.

"Orion, the first human-grade, deep-space capsule will remain in space longer than any ship has before without docking to a space station. It will also return to Earth hotter and faster than any other spacecraft to date," Kennedy Space Center's website stated.