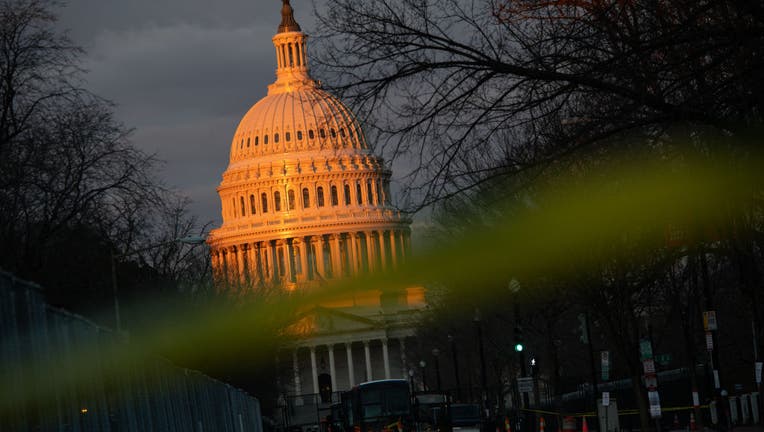 The U.S. Capitol at dawn in Washington, D.C., U.S., on Monday, Jan. 18, 2021. More than 25,000 law enforcement, military and intelligence personnel have been activated to provide security in Washington leading up to President-elect Biden's swearing-i

WASHINGTON (AP) - A Florida man was convicted Tuesday of storming the U.S. Capitol during the January 2021 insurrection.

A District of Columbia federal judge returned the verdict after a trial where William Rogan Reid, 37, of Davie, Florida, and the government agreed upon a stipulated set of facts regarding his conduct, according to court records.

The charges include felony counts of obstruction of an official proceeding and corruptly altering, destroying, mutilating, or concealing a record, document, or other objects, as well as five related misdemeanor offenses. His sentencing is scheduled for Dec. 7.

Reid was arrested at his home in April 2021.

According to court documents, Reid joined with others objecting to Democrat Joe Biden’s 2020 election victory over then-President Donald Trump. A mob attacked the Capitol on Jan. 6, 2021, in an attempt to stop Congress from certifying election results for Biden over the Republican Trump, authorities said. Five people died in the violence.

According to the criminal complaint, Reid posted a video on social media the afternoon of Jan. 6 of people walking toward the Capitol, with superimposed text stating, "Time to storm the Capitol."

Reid was among the first rioters to break through a police line and rushed up steps towards the Northwest Courtyard, prosecutors said. Once there, he confronted another police line, where rioters again forced their way through.

Reid climbed a set of bleachers, recorded another video and eventually entered the Capitol. Officials said he damaged a television and water cooler inside a restroom.

Since Jan. 6, 2021, more than 860 people have been arrested in nearly all 50 states for crimes related to the breach of the U.S. Capitol, officials said. More than 260 people have been charged with assaulting or impeding law enforcement.