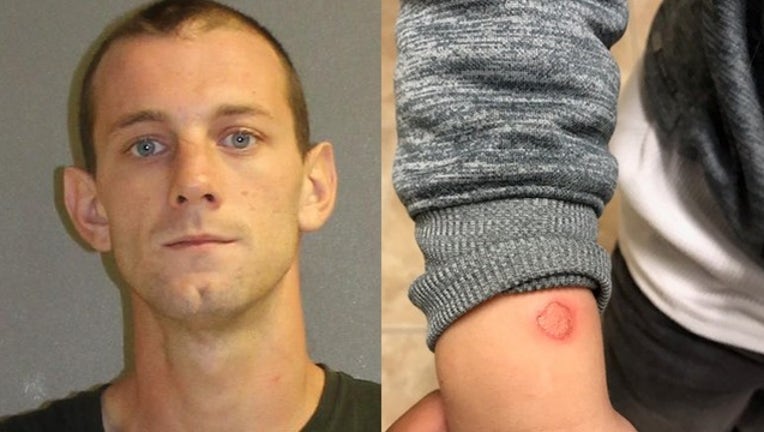 ORMOND BEACH, Fla. (FOX 35 WOFL) - A man was arrested after allegedly burning a child's arm with a lighter to teach him a lesson.

The arrest affidavit states that an officer with the Holly Hill Police Department responded to the Little Academy on N. Nova Road in Ormond Beach on Monday in reference to a request to assist the Department of Children and Families (DCF).

Upon arrival, the officer says that DCF investigators told him that they were called to this school because a child came in wth a visible injury on his right wrist that appeared to be fresh. When the child was questioned about it, he said his father burned him with a lighter because he was playing with it.

The officer met with the child, who reportedly confirmed with the officer that his father burned him with a lighter.

The arrest affidavit goes on to say that the officer and investigators spoke with the child's mother. She said that she and her husband, 26-year-old Jesse Colaw, were attempting to show the victim and another child how bad playing with fire could be. The mother had to step away to tend to the other child and as she was coming back, she heard the victim scream and cry. She noticed a burn mark on his right wrist.

The mother continued to recall the event, saying that Jesse told her that he had burned the child with a torch style lighter to teach him a lesson because she obviously wasn't disciplining him properly.

On Tuesday, Jesse Colaw was placed under arrest and transported to the Holly Hill Police Department. The arrest report states Jesse Colaw is being charged with Aggravated Battery on a Child.