Florida hikes minimum wage to $10 per hour on Thursday

Fast-food workers and their supporters protested outside a McDonald’s on International Drive on Thursday morning, calling for an immediate 15-dollar minimum wage in the Sunshine State.

ORLANDO, Fla. - Fast-food workers and their supporters protested outside a McDonald’s on International Drive on Thursday morning, calling for an immediate $15 minimum wage in the Sunshine State.

"I believe it would cover the majority of what I would need, and help me put money aside to cover care for my daughter as well," said Jamelia Fairley, who attended the rally.

Fairley said she likes working at McDonald’s and doesn't want to quit, but added that she's having trouble making ends meet, even with today's minimum wage increase.

"It's not enough of a help for me to still afford housing and transportation to work and care for my daughter at the same time," she said.

Along with the hourly wage jump to $10 an hour, workers who get tips will also see their wages rise to $6.98 an hour. Anjannette Reyes is a tipped worker for an airport contractor. She said the price for everything is rising.

Some small business owners worry, though.  Evan Dimov, who owns the restaurant Too Much Sauce in Orlando’s Mills district, said he pays more than minimum wage, but his costs are also going up. 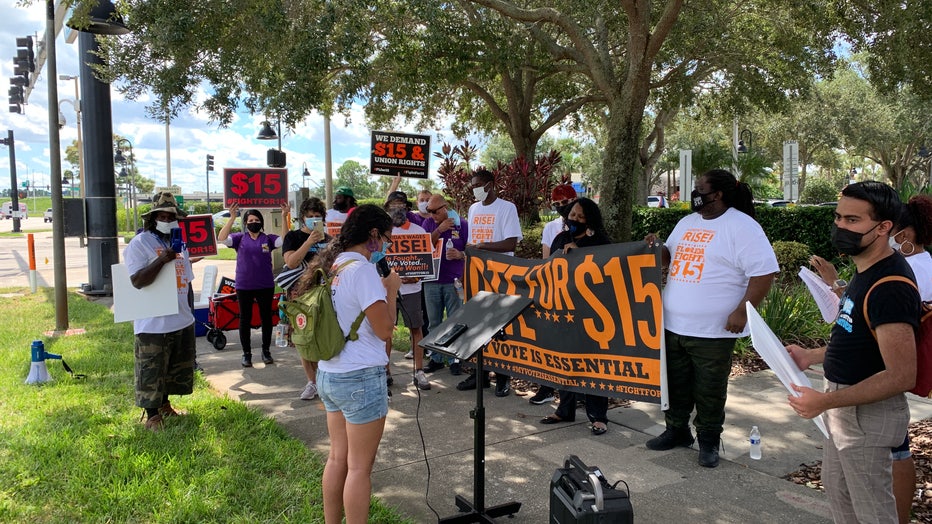 Dimov hopes prices will come down as the pandemic eases. He says he doesn't want to lay off workers, but he also can't raise prices too much or he'll lose customers.

"If the price of supplies are going to keep going higher," he said, "I'm going to have to cut back on their pay."