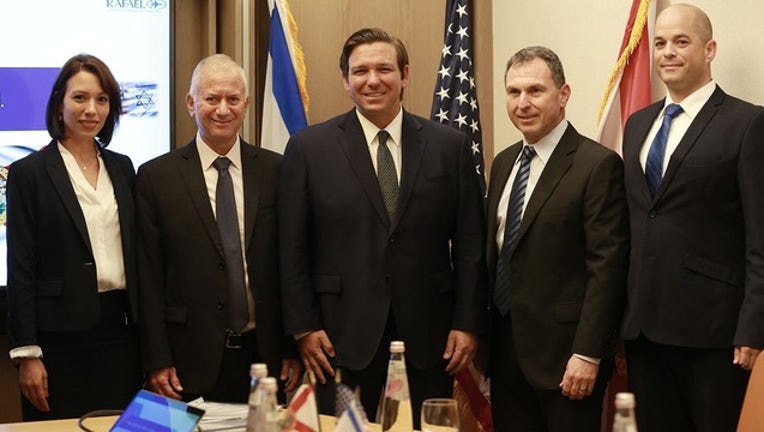 TALLAHASSEE, Fla. (AP) - Florida Gov. Ron DeSantis defended a meeting he held with the state's independently elected Cabinet in Israel last week, saying Tuesday that a lawsuit filed by an open government watchdog group and several media outlets challenging the legality of the meeting was "frivolous."

DeSantis' remarks came after meeting with the Cabinet in the state Capitol six days after their meeting at the U.S. embassy in Jerusalem. He was asked about the lawsuit filed by the First Amendment Foundation and several news outlets claiming the meeting violated the state constitution and laws that require meetings be accessible to the public.

The Jerusalem meeting was streamed live by The FLORIDA Channel and reporters from Florida were in attendance. It was also shown live on screens in the Cabinet's usual meeting room at the Capitol, and a conference line was used in case any Floridians wanted to comment on the discussion DeSantis and the Cabinet had with Israeli experts on water supplies and emergency response. None did.

"The lawsuit was frivolous, but I do think that maybe it actually caused some Floridians to want to tune into a Cabinet meeting for a change," DeSantis said. "We'll see how the ratings are online."

DeSantis also noted that the law allows the governor and Cabinet to meet via conference call. Those conference calls are made through a speakerphone set up in the Cabinet room, which allows interaction with the public.

"There's some meetings that take place just on the telephone, where there is not a physical location at all. This was streamed. There was not a single thing that we did that was not completely public the whole time," the governor said.

But First Amendment Foundation President Barbara Petersen disagreed with his assessment of the lawsuit.

"There is nothing frivolous about our concerns regarding the constitutionality of last week's Cabinet meeting. Yes, the Cabinet is allowed to hold meetings using teleconferencing, but there is an opportunity for the public to attend. This meeting was 6,000 miles and seven time zones away from Florida," Petersen said. "Those who had the means to attend the meeting were told they couldn't because of security concerns."

Petersen said the governor and Cabinet should hold their meetings within the state of Florida. The Cabinet members are Chief Financial Officer Jimmy Patronis, Agriculture Commissioner Nikki Fried and Attorney General Ashley Moody.

DeSantis said he consulted with his lawyers to make sure the meeting in Israel was legal.

"We're very confident it complied to the hilt," DeSantis said. "The law is the law. I have no interest in trying to skirt it."