Florida Gov. Ron DeSantis signed a bill Friday that would eliminate the Reedy Creek Improvement District, a special independent district established in the 1960s that has allowed Walt Disney World to govern itself.

ORLANDO, Fla. - Florida Gov. Ron DeSantis signed a bill Friday that would eliminate the Reedy Creek Improvement District – a special independent district established in the late 1960s that has allowed Walt Disney World to govern itself – by July 2023.

The bill, Senate 4C, was introduced in both the Florida House and Senate on Tuesday. The Senate passed the bill on Wednesday, followed by the Florida House on Thursday. Gov. DeSantis signed it Friday, during a news conference at a school in Hialeah Gardens.

The bill, which goes into effect on July 1, 2022, rules that Disney's special district and other independent districts will be dissolved by June 1, 2023. However, there is also a process for impacted districts to be reestablished on or after that date, though details on what that process looks like and what it would entail were not immediately clear.

Gov. DeSantis and some state legislators have sought to quickly eliminate independent special districts, claiming that it gives "special privileges" in the law to powerful companies or entities. Others believe it's a politically-influenced move against The Walt Disney Company, which criticized the proposal and signing of HB 1557, the Parental Rights in Education Bill, which opponents have referred to as the "don't say gay" bill. 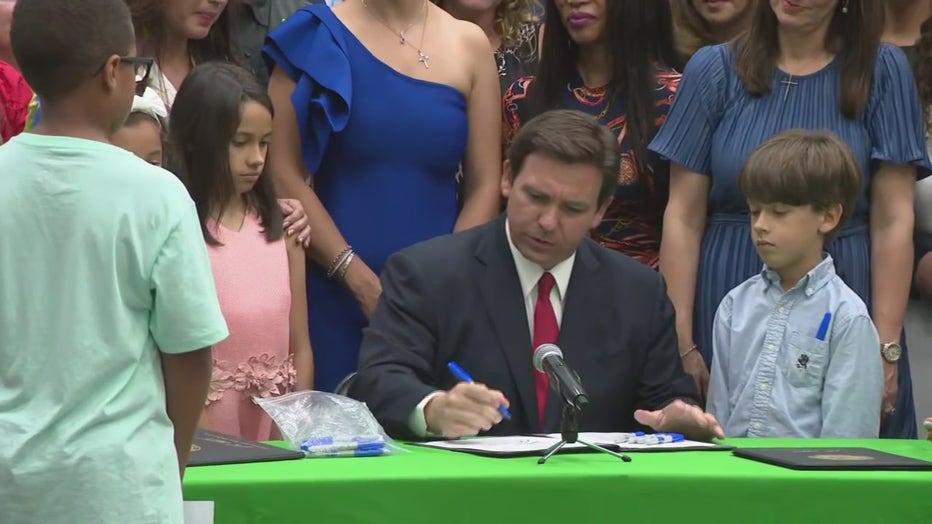 Disney faced its own criticism from employees and others for its perceived slow response to condemn the proposed legislation.

"Why is it fair that one company gets these special privileges, but the others don’t? It’s a discussion worth having," said State Rep. Randy Fine, R-Palm Bay, who sponsored the House's version of the bill.

He said he wants to consider revamping what Disney can and cannot do, including reestablishing the Reedy Creek Improvement District, but with some limitations.

Others said the move could impact the local taxpayers in Orange and Osceola counties, which surround Walt Disney World's massive property.

The Walt Disney Company has around $2 billion in debt, according to Representative Jeff Brandes, and if the Disney-run Reedy Creek Improvement District is dissolved, that debt could be transferred onto local taxpayers.  Local governments could also have to assume the costs to maintain Disney’s infrastructure.

Due to tax cap limits on how much property tax local governments can collect from Disney, it could mean a shortfall when it comes to managing Disney’s roads, garbage, public safety and wastewater. The legislature reportedly never commissioned a study to find out how much this could affect taxpayers or the Central Florida economy.

However, the executive director of the Florida Association of Special Districts said it may not impact taxpayers.

"Orange County could create its own dependent district around Reedy Creek and access them that same amount of money they need to pay their bills," Executive Director Dave Ramba previously told FOX 35.