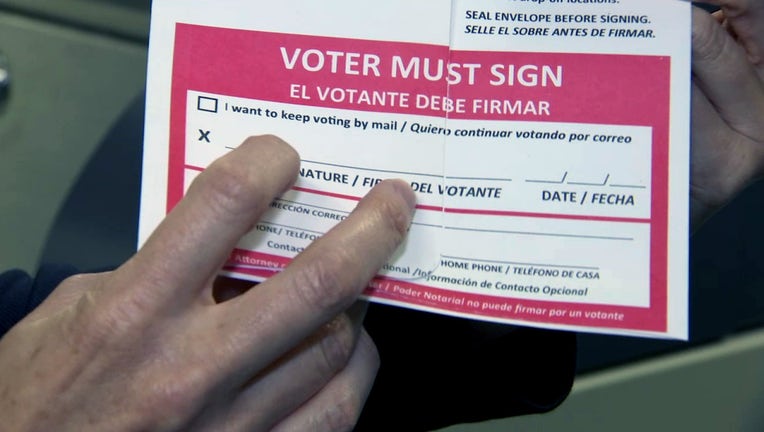 TALLAHASSEE, Fla. - Florida Republican lawmakers are pushing ahead with sweeping election changes largely focused on making it more difficult for people to vote by mail, an effort mirrored in GOP-led statehouses throughout the country.

In a party-line vote Monday, the House Public Integrity & Elections Committee signed off on a measure that would give supervisors of elections less leeway when comparing signatures on mail-in ballots, require voters to request mail-in ballots for each general election and make it harder to submit other people’s ballots at drop boxes.

But the House plan does not go as far as another controversial bill, also opposed by Democrats and the state’s elections supervisors, that is one step away from the Senate floor.

For example, the House bill, sponsored by Spring Hill Republican Blaise Ingoglia, would impose limits on supervisors’ use of drop boxes by requiring that the boxes be staffed and only available for ballot drop-offs during regular early voting hours if they are not located at the supervisors’ offices. The Senate companion bill would completely eliminate drop boxes, which about 1.5 million voters used for the November election.

Both the House and Senate measures would require voters to request mail-in ballots every two years. But the House measure (PCB PIE 21-05) would "grandfather" in requests made before the 2020 election. Under current law, requests are good for two general elections, which occur every two years.

Republicans throughout the country are targeting mail-in ballots after millions of voters opted to vote by mail amid the coronavirus pandemic last year. More than 4.8 million Floridians cast ballots by mail in the November elections, compared to about 2.6 million in 2018, according to the state Division of Elections. Democrats relied far more heavily than Republicans on voting by mail in November.

Gov. Ron DeSantis and other GOP leaders praised the Sunshine State’s handling of the presidential election, in which former President Donald Trump’s victory in Florida over now-President Joe Biden was decided well before midnight.

But Republicans maintain that the state needs to clamp down on vote-by-mail procedures.

"There are problems that happened in other states that we’ve recognized. Just because we’ve seen it in other states, and we don’t have something in law to prevent some of that, doesn’t mean it is not good policy and we shouldn’t attack it now. We should never have to wait for a problem to occur to head off that problem," Ingoglia, a former chairman of the Republican Party of Florida, said before Monday’s committee vote.

Ingoglia’s proposal (PCB PIE 21-05) slightly eases off some other restrictions included in the Senate version of the bill (SB 90).

The House plan would allow people who reside at the same address to pick up mail-in ballots for voters and drop them off at drop boxes, if they show identification or sign affidavits.

That provision could be problematic for voters with disabilities and residents of group homes and assisted-living facilities, said Rep. Allison Tant, a Tallahassee Democrat whose adult son has a disability and is unable to drive.

Other proposals in the bill "add time-intensive, costly procedures to the conduct of elections and jeopardize the timely reporting of election results," the Florida Supervisors of Elections association wrote to the committee on Monday.

Fact vs fiction: Vote-by-mail in Florida

More voters are casting ballots by mail so far in this month’s primary and a University of Florida poll shows more than 60-percent plan to vote by mail in the November election. But we ‘re getting a lot of questions about the process and concerns about security.

The House proposal would require mail-in ballots to be returned in envelopes, called "certificates," that show voters’ names, addresses and signatures. Supervisors would be required to record digital images of the certificates, make them available to the public and allow members of the public to challenge the signatures before the ballot envelopes are opened. Challenged ballots would have to be handled by county canvassing boards.

"That creates havoc. There will not be a way for us to get all of our mail ballots tabulated on time," Leon County Supervisor of Elections Mark Earley told reporters after Monday’s committee meeting.

In addition, making signatures public could be a "breeding ground for identity theft," argued Rep. Tracie Davis, a Jacksonville Democrat who is a former deputy supervisor of elections. She urged her colleagues on the committee to vote against Ingoglia’s proposal.

"This is unnecessary. It’s cumbersome. It denies basic simple access to voting and basically what we’re trying to institute here … is a waste of taxpayer dollars," she said.

A number of organizations, including the League of Women Voters of Florida, the American Civil Liberties Union of Florida and the state chapter of the NAACP, strenuously oppose the House and Senate proposals, calling them "voter suppression" efforts.

County election officials want to ensure "that all eligible voters have convenient and ample opportunities to vote, and that the elections in which they cast their ballots are safe and secure," the supervisors’ association wrote in Monday’s letter.

"Calling for unnecessary election reforms doesn’t just endanger our ability to conduct elections efficiently and effectively. It also risks destroying the voter confidence that we have worked so hard to earn," they added.

Election officials also raised questions about a portion of the House bill that would require supervisors to match signatures on mail-in ballots with "the most recent signature" on file.

Such a requirement "is a disservice" to voters, the supervisors wrote, pointing to the use of electronic pads at election precincts or driver’s license offices. Signatures on the electronic pads could be very different from a person’s signature on a paper ballot, they argued.

But Ingoglia said "there has to be some sort of standard" for supervisors to use to prevent signature mismatches.

Voting by mail should have the same safeguards as voting in person, he told the committee, adding that people have "serious concerns" about election integrity.

"I would say our constituents are demanding more integrity and more transparency in our elections," he said.