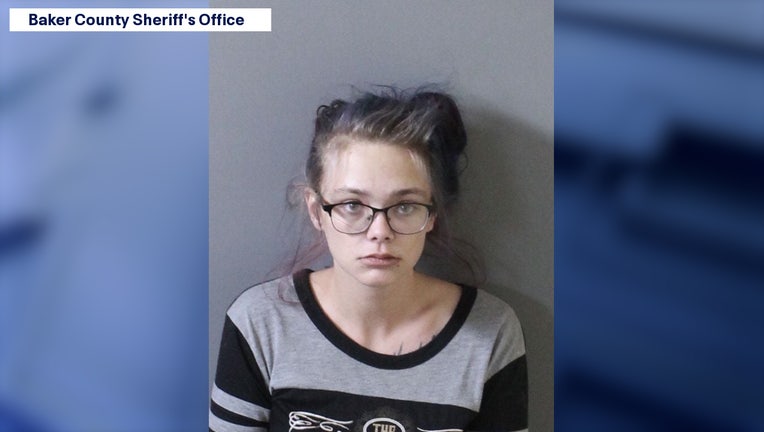 A Florida mom was placed under arrest on child neglect charges after her baby was hospitalized due to starvation, deputies said. Photo via Baker County Sheriff's Office.

BAKER COUNTY, Fla. - A Florida mother was arrested after deputies said her baby boy was hospitalized after starvation left him "gravely ill,"  according to the Baker County Sheriff's Office.

Deputies said they were alerted about the baby's life-threatening condition on April 6 by Wolfson Children's Hospital in Jacksonville.

Detectives said the boy's grandma took the child to the hospital after she noticed he was severely underweight.

BCSO said the 8-month-old weighed the average weight of a 2-month-old.

Doctors also noticed that the baby suffered a skull fracture some time prior to being admitted to the hospital, according to BCSO.

Deputies said his 21-year-old mother, Haylee Kent, never visited him while he was in the hospital, and according to BCSO, was not cooperating with deputies, nor the Department of Children and Families' investigation.

She agreed several days after the incident to speak with detectives.

Following her statements regarding the baby's condition and injuries, deputies said they arrested her on child neglect charges.

BCSO said it believes the boy had suffered from a pattern of neglect since the day he was born.

"This neglect consisted of a lack of necessary medical attention, malnourishment, and failure to provide a safe home environment," the sheriff's office said in a statement.

Kent told detectives "she felt the way her child needed to be fed was sometimes annoying, so she just opted not to do so," according to the sheriff's office.

BCSO said the boy is recovering and is gaining weight. He has been placed in foster care.