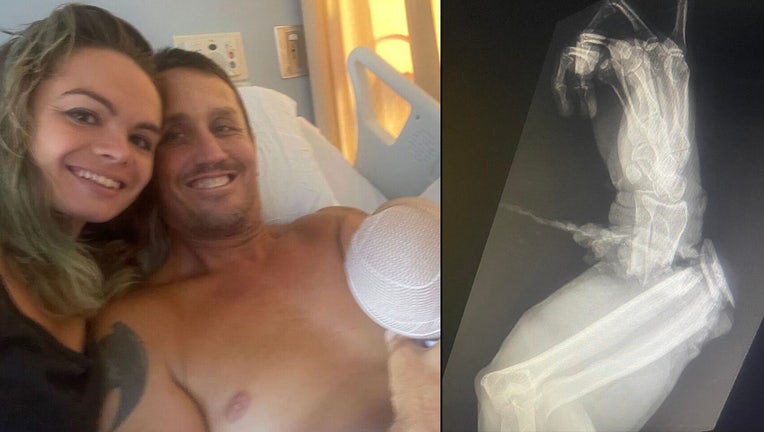 VENUS, Fla. - An alligator handler in Florida had one of his arms partially amputated after being attacked by a gator – and it's the second time he's almost lost a limb in nine years!

Florida Gator Gardens, which is located about 125 miles southeast of Tampa, recently posted an X-ray image on Facebook that showed the injuries that the park's wildlife director Greg Graziani endured this month during a routine interaction with one of its large alligators.

"After receiving a partial amputation of his left arm, he was immediately flown to Tampa General for treatment," Florida Gator Gardens wrote. "The surgeons spent over 9 hours reattaching his arm, creating new vessels for blood flow, and putting plates to hold the bone fragments together. What was originally scheduled as an amputation has instead been a tremendous testament to the marvels of modern medicine, the dedication of Tampa’s staff at all levels, our own staff’s calm, deliberate actions during a crisis and Greg’s pure grit and maneuvering during an impossibly difficult situation."

The park said that accident was an "extreme injury that left Greg’s hand connected by one tendon. A tendon and some muscle that the surgeon had to untwist 6 times during the initial surgery." Unfortunately, Graziani's "hand was simply not able to recover."

"The amputation surgery was performed last night with a below the elbow amputation preserving half of his forearm," the park wrote on Facebook. "They performed a procedure to reroute the nerves from the amputated limb in such a way that helps eliminates phantom pain and offers the option for prosthetics at very top of technological advancements and innovations."

As far as the alligator involved, he was uninjured and will continue to stay at the park "as a valued member of the zoo."

This is the second time in nearly 10 years that Graziani survived a gator attack. The park says in 2013, he almost lost his right arm during an incident, but "came back more determined to share his passion for reptiles with the world." The Independent reports that Graziani almost had to have his arm amputated after being attacked by a 7.5 foot "nuisance" alligator during the 2013 attack.

Florida Gator Gardens says that Graziani has assured them that this time is no different and "even through the pain and heavy medication, he is still preaching his reptile education to nurses, doctors, and visitors alike."

The park went on to say that any time you work with animals, there is always a risk.

"That is something Greg and the people who love him have always accepted. This incident could have just as easily been a fatal tragedy. We are so happy to be given another chance to chase our passions and live the life with those we love."