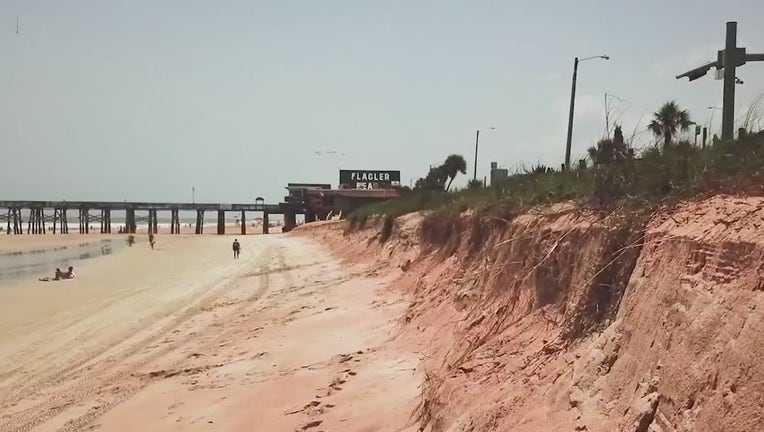 FLAGLER COUNTY, Fla. - Governor Ron DeSantis along with FEMA visited Flagler County Sunday to get a firsthand look at the damages to the beachside and to access the overall damage Hurricane Ian made to the county.

"The residential damages were more than $10.6 million: six homes with major damage, 80 with minor damage, and another 185 that were affected," Lord said. "More than 2,500 FEMA Individual Assistance claims have been made."

Lord described the damages as "under-reported" with loss of power and production. That loss affected many small businesses on Flagler Beach. Those reported damages are upwards of $330,000.

Excluding cost estimates for damages to the beach and dunes, which will be considerable, Lord said governmental damages are estimated to exceed $5.6 million. This includes $1.3 million for debris removal, $1.3 million for emergency protections, $1.6 million to buildings, and another $1.26 million for roads, parks, utilities, and water control.

"We had 15 inches of rain in some places, like the Bunnell Wastewater Treatment Center, and that overwhelmed sewage systems," Lord said. "We had Intracoastal (Waterways) and coastal flooding. We had catastrophic coastal erosion."

County Engineer Faith Alkhatib attended the briefing and pier tour giving her assessment on the catastrophic coastal erosion and its impact on residents and infrastructure.

"After Matthew we did a $20 million dunes project and it’s all washed out," Alkhatib said. "That leaves our residents vulnerable. We are worried about the environment, and, of course, we have been working with FDOT (Florida Department of Transportation) to protect State Road A1A. We need help, support, and funding. Even if you could reduce the 50% local match or waive it, it would help."