The Florida Department of Law Enforcement said their agents have broken up an elaborate theft scheme, in which items were purchased at a fraction of the cost and resold on eBay at a higher price. Detectives said the accused criminals switched out bar codes in this alleged scheme.

ORLANDO, Fla. - The Florida Department of Law Enforcement (FDLE) says it busted a theft ring hitting Target stores and Home Depot stores across the state of Florida and around the southeast.

Agents believe the suspects committed more than 150 thefts valued at more than $300,000, saying as many as 90 of the thefts were in Florida.

FDLE hauled more than a dozen boxes of evidence in for a news conference Monday afternoon.   Investigators say Usman Ali was the ring leader of the thefts.  They say he and his crew stole everything from breast pumps to Nicorette to Rogaine and WiFi-enabled light dimmers. 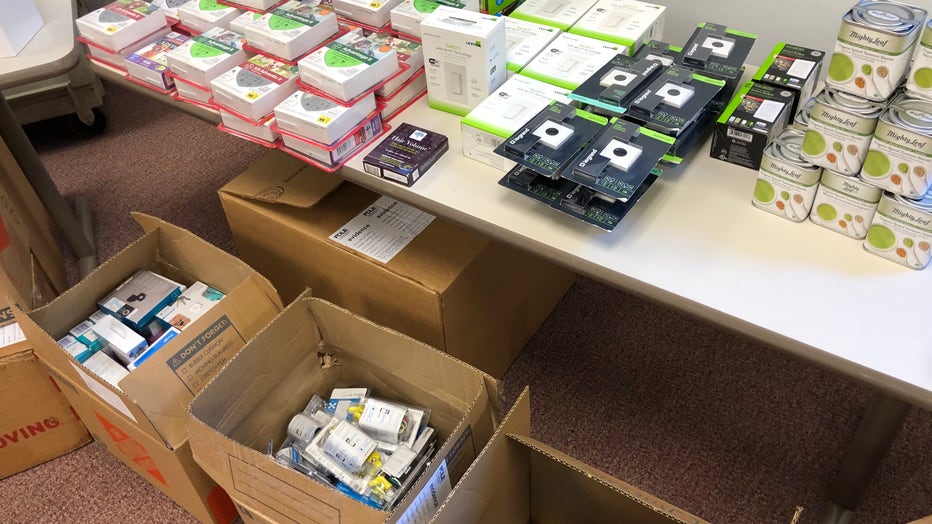 Special Agent Lee Massie says Ali would bring barcode stickers for $8 and $20 items and put them over the barcodes of goods costing much more.

“A smart-lighting dimmer switch kit which sold for $100, a WiFi smart thermostat that sold for what would retail for $200 and a home wifi system selling for nearly $300 retail,” Massie said.

He says Ali would put the items in a cart then leave the cart in the store and call one of his associates who would them come in and find the cart.   Surveillance video shows the other suspects pushing carts and checking out, looking like normal shoppers.   Once out of the store, FDLE says the goods were all given to Ali and that he’d take them home and sell them on eBay.  According to FDLE, Ali would sell the items for just a few dollars less than regular retail prices.

“If you’re buying an item valued at $300 for $8, then reselling them for almost retail cost, you can see the profit margin. Pretty good,” Massie said.

Home Depot’s loss prevention department caught onto the scheme during an inventory check and alerted officials in May, FDLE says.

“They would identify through an inventory check. They would show a certain number of items being purchased, but their inventory showed they still had a 'sig' number of them in. Then, they’d find the reverse on another item,” Massie said.

At the end of the day, FDLE says the consumers wind up paying for these crimes.

“We all pay a little bit, a few extra dollars in there because of the volume of loss,” Massie said.

FDLE says Ali turned his three-car garage into an organized storage area for all the stolen goods.

Teas, Rogaine, and dog flea medication were some of the other items illegally bought and sold, special agents say.

Usman Ali, Rand Clark, Gwendolyn Walker, Harold Wilson, and Keith Conyers are all charged with racketeering and conspiracy to commit racketeering.  Ali, Walker and Clark are each being held on $500,000 bonds.  Investigators are still trying to find Conyers and Wilson.